Hooray, another night on the town. So far we've been to an overpriced nightclub, a pretentious art gallery and an organic cafe where they glare at you for mispronouncing "quinoa." Clearly those places were too exciting though, so now you've dragged us somewhere even worse: another fucking Giger bar.

Here we go, stepping through the mouth of this giant metal skull. Now there's a translucent membrane that coats us in viscid ooze as we pass through. (What are the odds?!) All the Giger bar standbys are on display. Alien hieroglyphics? Check. Ceiling made of arched vertebrae? Check. Demonic androgynes performing unspeakable acts with mechanical phalluses? Check. Oh, and in case you're still not sure it's a Giger bar, here's a cyanotic fetus with welding goggles checking our IDs. 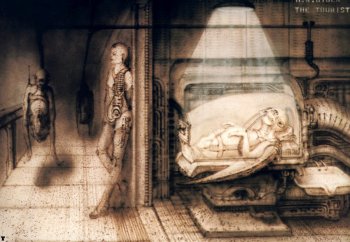 Let's grab a seat in these ribcage chairs. I haven't seen these since the Giger bar on 87th street, and the one on 93rd, and literally every Giger bar in the city. Get a load of this menu. Broiled goat cauls, cerebrospinal smoothies.... No, just kidding, I haven't actually read the menu yet, but I'll bet you anything that's what's on it.

Oh man, check out that biomechanoid in the corner with tentacles for hair. I bet she spent an hour on that hairdo she wants you to think she just crawled out of a pool of amniotic jelly with. That's a nice synthetic proboscis she's got though. Must have put a serious dent in her trust fund.

Haha, look. People are dancing to that song that sounds like a pig being molested by giant insects. Next they'll play the one that's just that shrill alien scream for five minutes. You can tell they're Giger bargoers because they barely move while dancing. Probably afraid to rupture the fluted rubber hoses connecting their bodies to that giant pulsating orb on the ceiling. Wouldn't want someone to take an unflattering picture. 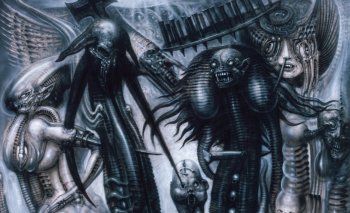 Oh wonderful, here are our drinks, some sort of green phosphorescent broth served in urn-shaped mugs - this must be the only non-gray thing in the room. I bet it makes you hallucinate landscapes made of sex or cyborgs fellating shotguns, or maybe even both at once! Nah, that would be too original.

Shit, now people are strapping on prosthetic ovipositors and laying eggs in each other's mouths. There's this glutinous sludge dripping from the walls and people are smearing it all over themselves while having sex through slimy peristaltic tubes. That sure would be shocking and rebellious if every single person in the room weren't doing the same thing. I need to get a picture of this. I think we've found the epitome of Giger bar culture. I just hope my phone doesn't break from the black hole of lameness in this room.