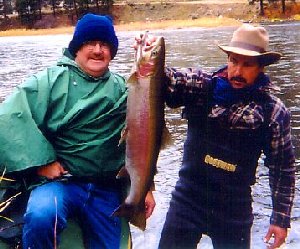 This is me with my buddy Hank "Tex" Hudson. We caught this here fish and beat the shit out of it.

It's that time of year, folks. Time to dust off the old rod, get out the box, and shave your balls. No, you silly goose, I'm talking about fishing! Fall is the best time of year to get out into the great outdoors and wrestle some scaly bastards for food and frolic. There is nothing in this world that than can give you a more heightened sense of power than strangling a carp to death with your bare hands.

When the leaves start turning yellow, I set out on my boat "The Bold Rapist" to battle God's gentle creatures of the sea. Today I will be taking you on a fishing trip, where we will learn the fundamentals of fishing as well as the tricks of the trade to become an expert angler. If you read my updates (condolences) then you know I'm an expert at virtually everything besides pet care and self grooming. I know all and see all, laying waste to all before me. I am the chosen one, destined to destroy the world with my giant, all-mighty phallus of untapped sustainable energy. Lets go fishing!

Before I strap your chubby ass to a buoy and throw you into the sea as chum bait, we should cover all the basics that you need to know before setting out on such an adventure. First you need to know the fisherman's code: an old set of bylaws handed down from generations of fisherman in ancient Galilee, who never caught anything in the Dead Sea but gave it their best shot. From these arcane scrolls we can glean the wisdom of the sea. Behold:

1. Beware of pirates.
2. One who fornicates with fish will be outcast.
3. Life jackets are for pussies.
4. No singing at the dinner table.
5. Don't be a crook, don't double hook.
6. Yarrrrrrrr

Memorize the fisherman's code if you wish to be successful on the high seas and not fall victim to the many dangers that await in the deep. Know it, learn it, live it, love it.

SUPER SECRET FISHING TIP: You should put worms on your hook to attract fish. If nothing bites, you can reel in and brag about how you caught a worm. 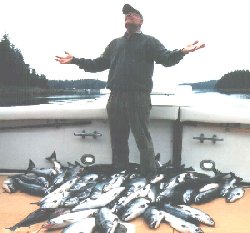 Fishing Poles: Modern archaeologists still disagree on when civilization first came up with the idea of a fishing pole. The widely accepted theory is that the Babylonians first invented this technique, by placing their fuzzy lemur tails in ponds where the fish would nibble on them. Other cultures would just try to club fish with a stick, or coax them to land with the hallowed notes of the pan flute. That's because people back then were really stupid.

Real fishermen make their own poles, pouring their blood, sweat, and tears into this most holy of instruments. If you show up at a fishing hole with a graphite rod you bought from some Internet catalog, you will be mocked and probably stoned to death by the other fishermen. To find the perfect stick for your pole, travel into the deep forests of Prussia armed with only with a knife and sarcastic sense of humor. Find a sapling that is about the height of a full grown tapir, and fight it to the death. If you survive, carve out your rod and bathe it in the blood of your enemies. Now you are armed, and ready for battle with the scaly-hided beasts of the sea.

Lures: Fish are idiots. If you really want to catch a fish, don't just slap a worm on a hook and cast it into the water. Real pros use innovative and experimental lures that cause the fish to be attracted to it from reflection, movement, and texture. Here are some of the best sellers that you'll want to pick up: 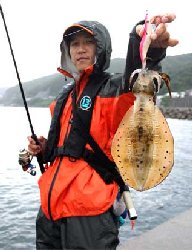 Never go fishing in Japan unless you like sea monsters.

The Blue Baby: This special edition lure made by the Palsy Brothers Tackle Shop is a one-of-a-kind in its class. It incorporates the style and grace of earlier PB models, but with a twist that will be sure to snag all fish in its vicinity. While The Blue Baby is considered a gimmick lure by some of the more conservative voices on the fisherman scene, it can't be denied that it works like a charm. Some claim that this PB lure is just a blue plastic doll with silver hair, but this reputable company claims that space-age technology has given birth to this great lure.

Daddy’s Little Dancer: The 1920s ragtime movement was not limited to dancing and fashion. This classic lure was developed during that turbulent time to bring the attitude of the age to the world of fishing. The lure consists of a miniature wooden man with a top hat, apple blossom pants, and legs that jumble around with the current in a recreation of the Charleston. The fish recognize this dance, and hate it immensely, trying to bite the little man’s legs off to get him to stop dancing. That’s when they get hooked in the face and thrown in a shallow bucket to slowly suffocate.

The Nagasaki Special: Although outlawed in many fishing circuits and major championships, this is an extremely popular lure for the fisherman on the go. Some of us actually have lives and don’t have time to dick around on a boat for 8 hours getting skin cancer. To save time, this lure sends a mating signal out into the water to attract all the fish in the area. Once you have a swarm near your lure, hit the red button. this will detonate a small amount of C4, blasting all of the little horny bastards in the area. After that it’s only a matter of scooping the dozens of fish up with a net and driving home to brag about it in an online chatroom. The only risk with this one is not casting out far enough and blowing up your boat, or getting caught by the feds. I normally pack about a dozen of these just so I can make a getaway if cornered.

Beer: Three words for you: Pabst Blue Ribbon. This is what real fishermen drink, and if you are seen with a fancypants beer like Miller Lite or Coors then prepare to get some jeers. Don’t even get me started on any Canadian, European, or Asian beers. I once saw a yuppie fisherman sipping on a Sapporo while listening to his iPod. The next time my boat passed by, some regulars had painted his ears red and thrown a live baboon into his boat, which was biting him ferociously on the arms and neck. For a single fishing trip I recommend bringing at least 3 cases of PBR, or a full keg.

SUPER SECRET FISHING TIP: Drill holes in your boat so you can go faster.

There are many types of fish for you to prey on. Some are plentiful and taste like rotten potatoes, but there are some very elusive and tasty fish out there. You should know the difference between each type, so you know whether to put it in your bucket, take it home, and interrogate it on the location of its brethren. If it’s an undesirable sort, you can just take the hook off, shoot it with a .38 special (all fishermen should have one), and then release it back into the wild. I can’t really tell you how to tell the difference between them because I accidently ate my fish book, so I’ll just list a whole bunch of things so you can look them up online and print up the pictures to take with you. 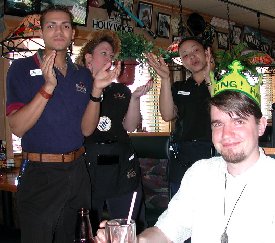 GET AWAY FROM MY CHICKEN FINGERS YOU CLAPPING FAGGOTS!

SUPER SECRET FISHING TIP: Applebees’ curbside pickup is nice, because I hate the birthday clapping song. The last thing I want to hear while I’m eating my hamburger is some shrieking college dropout intentionally bellowing some off-tune ditty that is supposed to be humorous in a senior citizen/brain-damaged sort of way. If I ever find myself in that position again, I am going to cut off all their hands with my steak knife and finish my meal in silence while jets of hot blood pour from their mangled, clapping stumps.

The last thing you need to learn before you are a full-fledged certified fisherman is creating your fisherman’s tale. Obviously you won’t actually catch anything, because you will be too busy drinking PBR and aggressively attacking other fishermen who bring manufactured rods or fancy beer. The fisherman’s tale was created so you don’t have to go home in shame and failure. When preparing to leave the lake for the day, create your tall tale and go over the facts again and again so the story won’t fall apart during intense questioning. Something along the lines of “I had this huge fish on my line that was 11 feet long and with my super strength I wrestled it into the boat but it was a magical fish and was really a wizard that was polymorphed by a curse and would grant me a wish if I let it go, so I let it go but I forgot to wish first so it shot a fireball at my boat and sunk it."

If this seems like too much work for you, go to the market on the way home and pick up some fish so you can pretend you caught them. I’ve been doing this for years and nobody has been the wiser.

So there you have it! Get out there and snag some fish, before the harsh winter comes and turns the water into that hard substance that I can’t remember the name of. Good luck, you clueless retards!

One night I was really depressed and drank a lot of beer and made a webcomic. It was called Tales of Pork and it was the best drunken webcomic I have ever crafted. FEEL MY PAIN.