How To Know When You've Won An Argument On The Internet 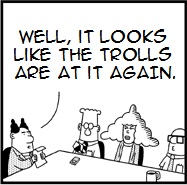 Hello, I'm the Dilbert guy. You might know me from: Dilbert, the comic strip about an office worker who hates Mondays but loves lasagna, and my 2016 book "The Illusion of Thought: 50 Ways I'm Already Inside Your Head", which is now banned from being donated to many second-hand book stores.

Several months back, I decided to become a political commentator, and it turns out it is actually that easy. However, I noticed that, without fail, each one of my posts fell victim to the scourge of criticism. Why were people doing this? The answer is simple: Wikipedia's "List of Logical Fallacies" article was glamorizing the use of logical fallacies.

What is a logical fallacy? An example follows:

A: I have provided a 50 point essay on why global warming is caused by people exhaling more than they inhale.
B [stupidly]: I'm going to ignore your good argument and commit the fallacy of ignoratio elenchi - or irrelevant conclusion - by calling you a nasty insult for no reason!! [laughs evilly]
A [tinged with world-weariness]: Sigh. Once again the idiots and morons of this world have decided to rail against me when all I want to do is continue to create the comic strip Dilbert.

In that exchange, A is the smart guy and B is the idiot.

So if everything you write gets relentlessly criticized and called stupid, how do you know you're right? This thought troubled me for a time, to the extent that I granted it a name - "The Smart Man's Burden". What follows are a list of "tells" for How To Know When You've Won An Argument On The Internet, which is the name of this article. That's no coincidence.

The "Joke" is the refuge of the foolish and mentally subnormal. If your discoursal opponent lowers themselves to using a "Joke", it's proof they themselves can't think of a solid data point.

All 140 characters... Why? What could you possibly be trying to do here? Did you think I wouldn't notice?? Honestly, anything over 120 is suspicious.

Warning sign number one right here folks. If their criticism is so valid, why don't I already believe it? Do you seriously think I wouldn't have already taken it into account if it was right? Why would I DELIBERATELY be wrong? Your argument defeats itself.

Dunking Your Head In The Toilet

Self explanatory. This is a classic case of argumentum ad hominem. Once your head has entered the bowl, your opponent has already lost. Take pride in your water-filled lungs and slight smell of urine - for they are the signs of intellectual victory.

Now, the naysayers will point out that I myself have no proof for any of these "tells". To that I say, fool naysayer, you have already committed tell number 3. Thank you for sharing the experience of The Smart Man's Burden. I'm done writing this post now.

If you liked this post, you might enjoy the latest Dilbert collection, "I Can't Work at my Computer Job Without Drinking A Big Cup of Coffee!", or my latest non-fiction book, "Insidious Tentacles: Why Muslim-Americans are Actually the Extruded Polyps of a Subterranean Elder God - and How YOU Can Profit!"