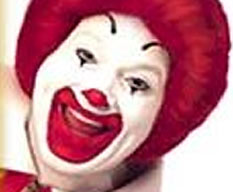 Ronald McDonald, as terrifying as always.I vividly remember that intense excitement that would wash over me whenever I had a steaming carton of Happy Meal in my lap. I think it was the surprise of opening up that arch-topped box and finding a random crappy toy inside. Well, okay, I admit those are someone else's memories because I've never eaten a Happy Meal before in my entire life, but I have a lot of empathy. I would imagine it to be very similar to the excitement of opening a Cracker Jack box only Happy Meals came with much better toys than a temporary tattoo of Popeye or three knock-knock jokes printed on a folded piece of paper.

Now you can revisit this exciting moment of your youth thanks to McDonald's new Happy Meals cleverly called "Go Active" meals. Yes, indeed, Go Active right through the drive through, park in one of the spaces in the lot and cram five Egg McMuffins down your throat. Or listen to Ign.com and try a McGriddle, which is just an Egg McMuffin with an exciting McDonald's logo pressed into the top. This makes it better shaped to slide down your throat in a single bite.

Currently these adult Happy Meals are being test marketed in 150 or so Indiana franchises but if they succeed you can expect them to go national. What interests me about this prospect isn't the food, since it's the same shitty food McDonald's has always served, but rather the toys being included in the Happy Meals. Excuse me, Go Active meals.

At launch McDonalds plans to include health-conscious toys like a pedometer (it's like an E-meter for pedophiles) and an exercise booklet. Don't expect these toys to last very long though, there's only so many ways McDonald's can repackage a compass and a diagram of situps before people get sick of it. That's why McDonald's is already planning to lose the fitness motif and include more entertaining toys in their Go Active meals. Being the hard hitting journalists that we are, Something Awful has engaged in a little corporate espionage to bring you the secret list of upcoming toys complete with the marketing copy McDonalds plans to use in conjunction with them.

I have taken the liberty of organizing the list into two categories. One category consists of original toys that are either associated with nothing in particular or with McDonald's itself. The second category is chock full of entertainment related toys that McDonald's is planning to pack into their Go Active meals.

The American Flag Calculator Watch - "Show your patriotism in the best way possible; by exercising your right as a member of the free world to compute mathematical equations on your flag-themed calculator watch! America is sure to earn an A+ with this kind of help!"

The Fry Guy's Colorectal Cancer Early Detection Kit - "When Hamburglar isn't stealing their fries he's stealing the lives of thousands of Americans every year by afflicting them with nasty colorectal cancer. Join the Fry Guy's as they do battle against this irascible scamp by using their awesome colorectal cancer early detection kit. Hamburglar may have a surprise lined up for you, but early detection can save your life, so team up with the fry guys in thwarting his antics! Kit includes colon swab, fecal sample applicator, and chemical sensitive test strips."

Birdie's Magical Abortion in a Bottle - "Birdie has a little trouble! After a late night in the nest with Ronald her eggs seem to have ended up fertilized and she knows that you can't make an Egg McMuffin when your eggs are full of bloody fetus! That's why Birdie has cooked up a potion in her sink by wishing on a star and adding all natural* ingredients to her magical cauldron. A little dash will do her, and those eggs are back to being good old fashioned breakfast scramblers! Birdie was so excited about her creation that she wanted to share it with you, so that you too can get rid of those unwanted bad eggs. *natural is not meant to imply organic or herbal, natural in this context means "of terrestrial origin". WARNING: Not to be ingested after 3rd week of pregnancy. May cause internal hemorrhaging or severe birth defects in older fetuses."

Grimace's Pocket Vagina with Realistic Sucking Action - "Sometimes an ambiguous purple mass with huge eyes and a giant red mouth feels a little lonely. Grimace has spent weeks in his secret lab examining all the hottest gapers and tightest teen snatches he can find. His research is finally complete and Grimace is willing to share his amazing discovery of the most realistic pocket vagina ever made. Made from non-allergenic latex substitute, the realistic feel of this toy will blow you away, literally! With the addition of a single AA battery (not included) the Grimace's Pocket Vagina will take on a life of its own, and it's hungry for your cum!"

The Amistad Crazy Turbo Cars - "Some chains should never come to be, like constraints on the Amistad 5000 turbo car race! Now you can own your very own Amistad Crazy Turbo Car and race against your friends to fly free from the shackles of low speeds! Nitro Burning Cinque's Diablo Spec will tear up the track and leave your opponents in the dust. Watch out, your friends can own Cinque with Ensign Covey's rocket fueled X-Type Lamborghini! These cars are INTENSE!"

Shoah Rocket Troopers with Magneto Boots - "In the future the evil Nazions have invaded the planet earth and only the world's Jews can hope to stop them. Join Commander Shoah and his Rocket Squad with new and amazing Magneto Boot action in their fight against evil! Shoah can cling to any surface that contains metal, making the surface of your refrigerator or the side of your office desk a perfect battleground for Shoah to defeat the Nazions Scum Troopers. Collect Shoah, Lieutenant Abromowitz with real launching rocket, Cybernaut Sniper Ann Frank, the deadly ninja Goldstein-san, and Gatling Cannon General Lanzmann. The current set also includes a Nazion Scum Trooper for each to do battle with, look for more Nazions next year!"

Apocalypse Now: Charlie DO Surf Bobblehead - "It's a common misconception that Charlie don't surf, but with this hilarious new Bobblehead from McDonald's you can liven up any room or your car with a bouncing and surfing Viet Cong irregular. Press the head for one of five hilarious phrases like 'I rikee surf', 'okay GI, hang ten', 'you burn my village I surf your wave', and many more! Sure to make you the talk of the neighborhood."

Bill O'Reilly Hyper Spin Zone Sparking Top - "This top is sure to make the sparks fly at your next board meeting or around the water color. Just pump the top several times and place on a flat surface and watch as the top wobbles and whirls shooting off a hail of sparks. The spinning just won't stop, it can't stop, because spinning is life to the top and to stop spinning means to die. Like a phoenix you can ensure it is reborn by picking the top up, pumping it repeatedly, and placing it on a flat surface."

Michael Moore Talking Piggy Bank - "If you love Michael Moore almost as much as you love jokes about his impressive girth than this piggy bank will be a happy surprise in your next Adult Happy Meal from McDonald's. Lil' Mikey is hungry and this time it's for coins. Listen to him spout slanderous liberal taunts at you as you throw coins down his gaping maw. Remove his greasy and ill-fitting hat to open the bank and retrieve your money from his filthy stink pit."

That was as breathtaking as an ocean breeze on a balmy fall morning and I hope you look forward to collecting Go Active toys as much as I do. Between you and me, I think I'm looking forward to the Amistad cars the most.

Hey kids, it's your old pal Livestock. I'm here, as always, to provide you with another cookie cutter announcement about Photoshop Phriday. There is a new one up, you know! The topic this time is "American Social Hygiene Posters." You can bet that, in the hands of the Something Awful Forum Goons, this topic will indeed be informative, enlightening, and valuable to your health and well being. You can also count on shitloads of edgy comedy dangling on the tight rope of good taste. And by dangling I mean urinating off of it. Here is a bonus backdoor secret entrance to Photoshop Phriday. Don't tell anybody, it's just for you.