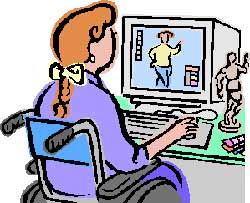 Even differently-abled people can chat and look at bad clipart.We all know that communicating online, and even by way of text messaging on cellular phones, is the hip new form of social interaction that removes all the unnecessary danger and unpleasantness of actual human contact. The problem with chatting online is that it's a rapidly evolving game, not unlike football when played by developmentally disabled people with amnesia. The rules are never the same for long, nor is the playing field. You have to be on your toes, and sometimes even on stilts while elevated by way of scaffolding, to keep up with the latest developments in the world of online chatting. New acronyms are being introduced daily, and old ones are being cast into the wide mouth of obsolescence never to be seen or heard from again. Emoticons receive plastic surgery or get horribly maimed, and new conversation aces are always being pulled out of the sleeves of instant messaging mavens. Being the good-intentioned asshole I am, I want to dedicate this update to teaching you all the hot tips and tricks for power chatting on the Internet, not to mention bring you up to speed on the latest developments in the world of emoticons and acronyms so you don't embarrass yourself with a thoroughly prehistoric vernacular.

Grab a pencil and some notepaper and prepare to make the most of your digital correspondence with this sophisticated arsenal of communication techniques: 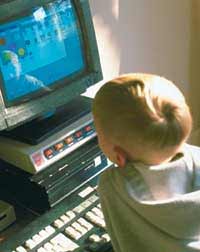 This young Internet user is chatting with interested males in his area.

Swords
Want to get the edge on a conversation? You can, quite literally, with the age-old technique of ASCII swords. Don't think they're outdated, though. Swords are primed for a huge comeback, due largely in part to the fear associated with guns. In this post 9/11 era, we most be extra sensitive about imagery associate with terrorism and war, and guns are a prime fixture of both. Swords on the other hand are not, mostly because everybody has seen that one "Indiana Jones" movie where the guy with the sword gets shot before he ever gets the chance to slice somebody open. In spite of their impotence against guns, swords still carry some weight, particularly in arguments both on and off the Internet. These razor-sharp wonders will let you cut straight to the heart of matters like a chainsaw through a gaseous whale tenderized by a brutal career at SeaWorld. When you whip out a sword, your chitchat comrades will be at your mercy, unsure as to whether the weapon is intended to harm them or serve them. In conversing, this is exactly the sort of palpable, trust-no-one tension you want. Just take a look at this conversation and see exactly what I mean:

As you can clearly see, the introduction of the sword into conversation enabled Eradicator33 to take charge and put l33tboi on the defensive. From now on, this stimulating conversation will belong to Eradicator33, and rightly so. If you don't believe me, just look at this exclusive testimonial from l33tboi:

I was feeling pretty sure of myself, large and in charge of the chatroom, but when Eradicator33 pulled that sword, I didn't know which way was up. I was startled and amazed, yet fearful all the same. Truly, there was an earthquake of turmoil rumbling through my bodily universe! Take it from me - swords put you on the cutting edge of digital chatting!

Swords come in many forms, and can be used in virtually any context. Just look at this second bonus example, available only in the expanded Criterion Edition of this update!

Time and time again, ASCII swords take command of the situation. In real life, pulling a sword might have the same effect, but you are liable to suffer long-term consequences since that's technically a crime of some sort. But on the Internet, where consequences don't exist and never will, you can do anything you want! How does one utilize swords in chat? Believe it or not, these powerful weapons are forged using no less than the basic characters of any computer font! Simply deconstruct the two sword examples space by space, and see that the components are nothing more than familiar letters and symbols occupying your very keyboard. With a little innocent and nonsexual experimentation, you can build your own mighty blades and wield them in chatrooms or in instant messages!

New Emoticons
The best way of expressing emotion is not through actual words, such as "I love you" or "I'm so depressed," but rather with crude, caveman-like etchings practically devoid of any human feeling. Since most emoticons are already meaningless bits of filler used to accommodate a lack of effort on the part of Internet chatters, the new 2004 line is even more textually spacious and irrelevant.

While the old emoticons will still function until the end of the year, they will be completely phased out by 2004. It is recommended that all Internet users upgrade to the new 2004 standards as soon as possible to help facilitate a smooth changeover. Failing to do this will result in Internet thugs coming to your house and roughing you up.

New Acronyms
Without acronyms, it's quite possible we would all spend years of our life typing the same phrases endlessly. But with them, we can simplify things by compacting complicated phrases into adorably small bundles of letters. Unfortunately, even acronyms outlive their usefulness, and must be updated and even replaced to reflect the more modern times. LOL might have worked perfectly in 1997, but it's 2003 now, and times are very, very different. Because I got a hold of an advance copy of the 2004 Internet Power Chat Manual, I've giving you a sneak peak at the next generation of Internet acronyms. 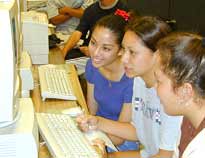 Here's some girls using a computer. Anything is possible if you just BELIEVE.Looks like 2004 will see a lot of unexpected phrases become quite common, but tomorrow is always an unpredictable scrap heap of shocking events and "you'd never have guessed in a million years" scenarios. If I've learned one thing from making it a point not to learn anything, it's that anything is possible. I suggest all of you get ahead of the game and memorize these simple acronyms!

As an Internet power chatter, it is your duty to stay on the front lines in the war against normal and intelligent conversations. Some final advice from me - be alert, and be prepared for any changes that may occur to the realm of instant online communication. They happen fast, and if you don't stay on the ball, there is a slight chance you might actually be coherent for a brief period of time. As wide as the Information Superhighway is, there is simply no lane reserved for coherency, so do your best to remain a confusing fountain of gibberish. And really, that's the true secret to power chatting - keeping ahead of the competition by refusing to communicate with them properly.