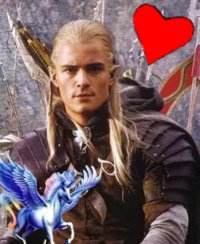 Today, my heart belongs to you fair Legolas.Today is a very special day for couples everywhere. It's a day devoted to loving your special partner in this world, to spend time together and grow as one, so that your passion can burn stronger and soar like a love struck retarded eagle. Well no, that's all bullshit. Today is the day that all the guys spend tons of money scrambling around town like chumps buying flowers, candies, and sparkly jewelry for their woman folk, while single people spend the day crying into a tub of Ben & Jerry's and watching reruns of The Gong Show. This day has always been the bane of man, designed purely to cripple his will, to make him weaker year by year, until the woman has total control over his soul and controls him like a hairy hand puppet. I also have a new theory that all women are shape-shifting demons sent by Loki to torment mankind for his sick amusement. I've tried to prove this by opening them up and trying to find the demons inside them, but most expired before I could totally finish my experiments. Until I figure out a way to make them last long and to Scotch Guard my basement furniture, we might never know the truth.

The history of Valentine’s Day is a rich and storied tale of magic and adventure. The origins have been traced as far back to Medieval Europe somewhere around the South of France. An evil mage was plaguing the lands, sending out orc hordes to harass the villagers and steal their prized hogs. One day the mage was very lonely so had his orcs kidnap the beautiful Princess of France. A Holy Crusade sanctioned by the Pope was mobilized to attack the wizard's foul land, and heroes from all over answered the call. One such hero was King Arthur from the land of England. They fought the orcs and other fell beasts until the mage was defeated and the princess rescued. Unfortunately before he died, the evil mage cursed the princess, turning her into a miniature sheep. Despite this, King Arthur fell in love with the sheep princess, taking her back to England in his pocket to be married. On the night of the honeymoon, they kissed for the first time and the curse was lifted! That honeymoon day was thereafter appointed "Valentine’s Day" by the holy Archbishop of Canterbury, Jonathan Hallmark. Then the King and the new Queen made a baby. That baby was William Wallace who would later lead the Scottish to freedom against English occupation with his awesome two-handed sword of justice "sting". This will all be shown in the special extended edition DVD of Braveheart II: Braverheart.

While the story of Valentine’s Day sure is an exciting action-packed blockbuster, it still remains a most dreaded day for men everywhere. One big question is how to appease your romantic and anti-logical female partner without her stabbing you in the face as a result of an unacceptable gift, and how to best spend this most holy of days. Since I am well versed in the ways of love from reading hundreds of erotic novellas, and watching late night Cinemax, I'll give you jerks some tips I've learned, because that's the kind of guy I am. Take notes, there's a quiz after the article. If you are a female and reading this, I'm not really a sexist, ignorant, and cynical man. I'm just mildly retarded.

Buy flowers.
This is a no-brainer. Girls lack any sort of cognitive logic whatsoever and love to be surrounded by smelly flowers that die within two days. I don't see the point of spending money on something that is so temporary and useless, but if you try to get out of buying flowers on Valentines Day you might as well get ready for a night of dodging frying pans. Cactuses are not acceptable as a gift, and there is a bee hazard to this gift so carry an anti-allergy shot just in case. Once, I gave a date some flowers in a Denny's parking lot and within seconds she was smothered with bees, screaming in agonizing pain. I didn't know what to do, so I ran away and never called her again. Good times.

She only loves you for the diamonds.
It's true. You are a worthless husk of man, totally devoid of any redeeming value whatsoever, except for your capacity to give away shiny diamonds in bulk. If you are lucky, you'll only have to buy one for Christmas, Valentine’s Day, her birthday, and your anniversary. With a second job, you should be able to pay off the diamonds in a couple dozen years. Think I'm just being cynical? Take that DeBeers ad where the couple is in Europe, and they guy starts screaming "I love this woman!" and she's all like, "Shut up, douchebag", but then he gives her the diamond and she's like, "Oh, I used to think you were a complete dolt but you gave me a diamond, I love you now!" My personal recommendation is to get a really good fake one and there’s a chance she'll never be the wiser.

The first Valentines card. Things were more violent back then

It's not rape if you are on a date.
C'mon ladies, if you go on a date with a guy on Valentine’s Day, you are expected to put out the goods after the services are rendered. Not only is it a day of love, but the guy will probably be giving you a gift and paying for a meal as well. By the end of the date, he will be in heat and ready for the mating ritual. Rejection would not be taken lightly, and will result in the forceful taking of the female's sexual goods. Afterwards, if the female goes to the police to file a report, she probably will be raped and beaten by them as well because it would still be Valentine’s Day and the police would be all lonely and angry at work. I’m not in any way condoning the use of violence against women; I’m just saying that’s how it works in the real world. And by “the real world”, I mean the Lifetime Channel.

Secret admirers, go for it.
Valentine’s Day is also a time for you folks pining for that special someone to gather up your courage and go for the gold. Usually the best way to start is to follow her around in order to learn her habits and daily routine. Once you know this, you can set up an "accidental" meeting by showing up at her regular hangouts. Then you can try to get a closer look into her personal life by mulling around the shrubbery near her house. Once she leaves for work, sneak in and leave love letters/threats in her underwear drawer. This excites them. If they still can't take the hint that they belong to you forever, boil her pet cat to let her know you mean business. With all these demonstrations of your fanatical love, she is bound to come around sooner or later. Don't let a court-appointed restraining order tell you any different. 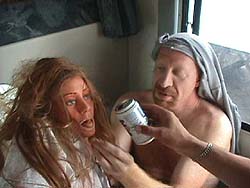 This day is special for single folk as well.

Condoms are a marketing ploy.
It's a vast plot supported by the U.S. Government and the Masonic New World Order to get your hard earned money, and rob you from the full sexual pleasure that you deserve. If you want to have a good time on Valentine’s Day, show your support of MATTOC (Men Against the Tyranny of Condoms) by going all natural, letting your seed spill where it may without the government telling you what to do. I've also read on some Internet forums that tricksy women may take the used condom and put the sperm inside of them to make a baby when you aren’t looking, therefore making you have to pay for child support for the next 18 years. The only safe thing is to abstain from using condoms, or tossing the used ones in molten lava so it can never be used for evil. Forty million Africans and the whole Catholic Church can't be wrong.

Single folks, treat yourself.
A common misconception about Valentine’s Day is that it's only for couples. This leaves single people feeling depressed and lonely. But it doesn't have to be this way. Just because a person does not have a partner, that shouldn't make this day any less special. Rent a romantic comedy, have a candlelit dinner with yourself or your favorite sexual aid, put on some soft jazz, and let yourself be whisked away on a night of unbridled self-discovery. Don't be afraid to wear something sexy to spice things up, or to lather yourself in sensual and exotic oils from the Far East. Try sticking something in your butt for a change. You might be pleasantly surprised.

I hope my words of wisdom can help you couples and single folk out on this day of love. If they do happen to work, and you produce spawn as a result, please name your firstborn "Reidly" in payment of this aid. As for the married or whipped men, they can only hope to spend enough to survive this day so they can get back to important things like drinking whiskey and watching NASCAR.

That being said, I wish now to take this time to ask an important question that has been tugging at my heartstrings all month. Zack "Cuddlenaps" Parsons, will you be my Valentine? If you don't answer, I'll take that as a yes and will be over with a box of wine, the movie "The Dirty Dozen", and some Play Doh. This is going to be the best Valentine’s Day ever!

Hi there folks, Dennis "Corin Tucker's Stalker" Farrell here again with this week's State Og. While our staff is not permitted to procreate under any circumstances (reptilian DNA problems) and therefore have no Valentines to shower with hot sticky love today, they are able to pass their love on to you, our valued customers.