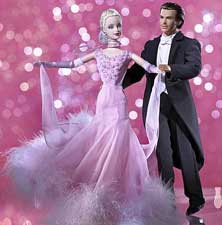 We always thought the magic would last forever, even with Ken sporting that gay moustache.

This is difficult for me to talk about. I'm sure some of you have already heard. I can barely bring myself to even discuss this tragedy, but this is a widely respected website with a reputation of integrity and reliability to uphold, so I'm going to have to swallow my emotions and share the awful news. Something has happened - something that we always feared - and now life as we know it will never be the same. The day has finally come for us to say goodbye to something that has always been there for us, something we thought would always be there in the future, something.... something that..... something that - excuse me, I'm a little choked up. I need a moment....

Alright, I'll just come out with it. Barbie and Ken.... have split up. That's right, Barbara Millicent Roberts and Ken K. Kenderson, who have been a steady item for forty-three wonderful years now, have called it quits. Australia's premier news site, news.com.au reports:

AFTER 43 years as one of the world's prettiest pairs, the perfect plastic couple is breaking up.

The couple's business manager, Russell Arons, vice president of marketing at Mattel, said that Barbie and Ken "feel it's time to spend some quality time apart."

"Like other celebrity couples, their Hollywood romance has come to an end," said Arons, who quickly added that the duo "will remain friends."

Yeah, sure, "friends." We've all seen how well that works. I'm sorry, you don't throw away a forty-three year relationship just like that and expect to be all buddy-buddy afterwards. Ken has got to be crushed. He let the world's most idealized woman slip away. Not like we can blame Barbie. There aren't many women out there who would stay with a guy for nearly half a century without a rock to show for it. And we all know she had marriage on her mind. Wedding Dress Barbie was stunning, but there was definitely a sadness behind that spray-painted smile. She was longing for stability. Ken has to be kicking himself now for letting his fear of commitment drive her away. But it's not like she's exactly being sensitive to his pain. This break up is timed conveniently around the release of Cali Girl Barbie, whose revealing and accentuating bikini top, short shorts, slutty hoop earrings, and deep tan seem to scream that Barbie is back on the proverbial market, and she's looking to score with someone new. And surprise, surprise, she's already found that someone. It's Blaine, a young, hip, Australian boogie boarder. You know, that's just typical. As soon as she gets out of a longterm relationship, she immediately flings herself at a cheap hookup with the cute badboy with the foreign accent. What kind of example is she setting for little sister Kelly?

Despite the split, it's unlikely that the Mattel toy company is going to stop manufacturing new Barbie dolls anytime soon. Now that Barbie is a free, single woman, she has a lot of exciting changes in her life to look forward to. And this Blaine character is certainly going to have his hands full on the beaches of California with an American knockout like her. But what about Ken? Barring the possibility of a Suicide Ken doll, the man isn't just going to disappear simply because he's no longer technically dating Barbie. I now present a look at the future of the Mattel Barbie lineup. Let's see what fun and endearing new toys we can expect from this classic line and the characters we all know and love so fondly.

Now that she is no longer tied down, Barbie indulges in the trashy pleasures that she has been missing for over forty years. Blaine is enough to keep her vaguely satisfied in the bedroom of her Dream House, but he's looking for a good time while he's in America, not a 24-7 relationship with some random blonde. As an Australian guy with a good outlook on life, Blaine is naturally befriended by every college kid in and around LA county. Hardly a night goes by when he isn't invited to some frat party, and Barbie always insists on coming along. Not wanting to lose the free sex he's been getting from this woman whom he barely knows, Blaine always takes her with him, but once she gets to the party, she practically ignores him altogether. Losing Ken left a bigger space in her life than she realized initially, and now she fills that space by getting plastered on keg beer and tequila shots. That frequently leads to dancing on tables and stripping. There's no doubt that Barbie is hot as ever, but everyone at the parties is always a little creeped out by this drunk chick who is so much older than they are and keeps referring to their buddy Blaine as "Ken," whoever that douche is.

"I'm going to put my drink down right here. Nobody better spike it while my back is turned! Especially not with GHB! Hee hee!"
"Oh cool, keg stands! We used to do those in the Sixties!"
"Oh come on... Ken always let me shave him! What? No, I don't think I'm too drunk to hold a razor!"

Meanwhile, Ken has been beating himself up about letting Barbie slip through his nonarticulated fingers. Falling into a deep depression, he turns to his one real comfort - food. Burying his inner pain beneath a mountain of Hostess snack cakes, Meat Lover's pizzas, and Oreos, Ken quickly loses the chiseled surfer physique that helped him first win Barbie's heart during a commercial shoot in 1961. He balloons up to an unseemly three hundred fifty pounds. Spending his days alternating between eating while watching soaps and trash TV and eating while sobbing uncontrollably about how fat he's become, Ken drives away all of his friends and ends up fat, annoying, and alone.

Fat Depressive Ken comes with a box of magic tissues with which you can wipe away the disappearing/reappearing tears and mucous that run down his face. The tissues can also be used to wipe up any other bodily fluids Fat Depressive Ken might expel while lamenting the time he spent with Barbie. 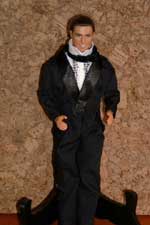 Oh, that's why Ken was so afraid to tie the knot - he could never find a tux that didn't look like it was trying to eat his skull.

Finally, Ken hits rock bottom. His depression over Barbie dominates his entire life. He decides that he has to win her back, but that he can never do that while looking like he does. He resolves to go on the only diet that can possibly blast through all of those plastic pounds and get him back in shape - the Subway Diet. By walking from his apartment to a Subway, purchasing one of their low-fat sandwiches - all with just six grams of fat apiece! - and walking back, he soon sheds the extra bulk and regains his studly physique. The next item on his agenda is getting Barbie back, even if it means knocking this Blaine punk out of the picture.

Subway Diet Ken captures Ken during the dieting process. At a weight of two hundred pounds, he is still nowhere near his goal, but he has already made a vast improvement. This doll comes with a Subway Select sandwich and a framed photograph of before and after shots of Subway's new spokesman, the incomparable Jared.

Now that he is back in prime physical condition, Ken goes about trying to win Barbie back. He finds her ignoring his phone calls and rarely at her own home. He eventually tracks her down and finds her going from frat party to frat party with some sandy-haired Australian hotshot. Enraged, Ken trails them during every waking hour, convinced that Blaine is taking her to these parties to get her drunk so he can take advantage of her. He neglects all aspects of personal hygiene, instead devoting himself entirely to getting Barbie out of the clutches of this young a-hole whom he is positive must be on some sort of drugs, and also a serial rapist. Eventually he comes to one conclusion: for Barbie to be his again, Blaine must die.

Stalker Ken comes with a pair of binoculars and a rusty machete, which you can use to "shave" his unkempt facial hair.

Barbie may be a lush and a sex addict, but she sure ain't no fool! She gathers from the twelve daily phone messages on her machine that Ken is dangerously obsessed with her. She also catches him stalking her and Blaine from the bushes with that filthy machete in his hands. The fact that his knees aren't bendable makes it very difficult for him to hide properly. Barbie is the role model to millions of young girls around the world, and she refuses to be a victim. Having had many professions in the past, including lawyer, she puts together a solid case to prove that Ken is stalking her and may cause harm to himself or others. After presenting this case before a judge, she is awarded a restraining order that prohibits Ken from coming within one hundred yard of her or Blaine. However, this does not allow her to rest easily. She realizes that the break-up was damaging to both of them, and decides she should take some time for herself. She calls things off with Blaine and returns to her Dream House, but the huge mansion with its dozens of rooms seems to creak and rattle at all hours, and being there alone is not quite as therapeutic as she had hoped. Indeed, she spends each night sitting up in bed, twitching at the slightest sound.

Restraining Order Barbie comes with a copy of the restraining order, a flashlight, and a taser, any one of which you can have her desperately clutch as she sits in her bed with the lights on.

Well, it looks like the immediate future is not too bright for the Barbie gang. But who knows what will happen next? Maybe Ken will get the help he needs. Maybe Barbie will get prescribed some valium to help her sleep and will become hopelessly addicted. Maybe Blaine will get hit by a bus. Only the folks at Mattel know for sure! For now, I hope you can pull yourself through the shock of this tragic separation of two worldwide icons, and I'll see you next week with an article that is distinctly less fucking girly.

Hello internet friends, Zachary "Spokker Jones" Gutierrez here. I love writing for Something Awful. There is nothing more fulfilling in my life than making fun of internet morons and I am honored to have you reading this feature week in and week out. The other writers and contributors on the Something Awful web site are just so friendly. We often hang out together and eat at the Olive Garden together. There is no where I'd rather be than right here talking to you. NO!!! I can't take it anymore!!! HELP US! HELP US PLEASE! We are being held against our will in Lowtax's basement! Please help us! He is a tyrant! He feeds us gruel and makes us dig holes in his backyard for no apparent reason. By the way here's the teaser image.

Oh god he's coming to beat me again! Please help me before it's too la