You launch yourself at the archive of "In Defense of" articles and I expertly step into your path. My hands are behind my back, my very powerful body assuming a non-threatening posture. You fume. I remain calm, an amused smile on my face.

You throw the first punch. I block it with blinding speed, my forearm coming up to meet the clumsy swing.

As you let loose with a flurry of blows, I keep one arm behind my back and still manage to block each strike. My economic movements hint at a complete knowledge of every fighting style and more than half of all documented hip-hop dance moves. 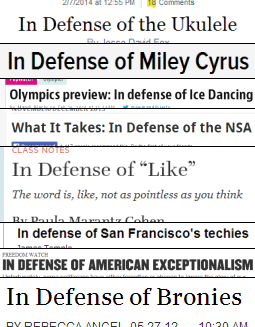 Impenetrable.In the distance, the world's most celebrated professional boxers, martial artists, and MMA fighters along with CM Punk watch in awe. They remove their championship belts, look at them, look at me, then burn the meaningless trinkets. "That dude puts us to shame," they say in unison, turning away to train harder.

Your unsuccessful attacks leave you winded. After retreating several steps and placing your hands on your knees, you whistle loudly to signal your backup. A thousand others just like you crest a hill, swarming to get at the "In Defense of" archive. I am unfazed.

When the charging mass crosses a patch of oddly colored terrain, I press a button. The trap works flawlessly. A wall of flames consumes half the attackers. They die wondering if it was really worth it to be so cruel, wondering if maybe they should have been more open minded and compassionate like me.

That leaves roughly 250 fighters. I tilt my head from side to side to loosen my neck, then gesture for them to bring it on.

The ensuing melee is as astonishing as it is impossible to follow with the naked eye. I become a blur of flips, dodges, parries, and counterattacks. Enemies are sent flying in all directions, knocking each other over. Before they go unconscious most of the attackers bark exclamations of stunned praise for my prowess.

Soon only the two of us are left.

You reach for the two handed mace strapped over your shoulder. It is big but also gaudy, covered in gems and engravings. I have no choice but to unsheath the longsword at my side. Though it is unassuming, the handle is well worn from use and the blade hums with power.

You roar, swinging the mace with more rage than talent. I lean to one side just enough to let the weapon whiff past my face. Your face becomes a comical display of confusion. I don't appear to move, but there is a hint of a blur. The mace falls apart in your hands, expertly sliced through in its three weakest points by my blade.

A bullet from an unseen sniper flies toward me. Dodging it would be trivial, but I allow the shot to strike me because I am willing to give my life in defense of "In Defense of" articles, and because it's important to consider the feelings of the sniper.

You laugh, walking past me to the "In Defense of" archive. You reach for the topmost article, James Franco's defense of Shia LaBeouf. As your fingers brush the surface to crush the document, it dissipates into tiny blue points of suspended light. A hologram. The entire archive is a hologram. You look very stupid as you puzzle it together. If it's a hologram, that means the real archive is...

... within me, a white light glows. My noble sacrifice resurrects me as your pitiful attacks turn inward, shattering your body into a million pieces. In the misty ruins of the battlefield, all those who I defended line up to thank me at great length.