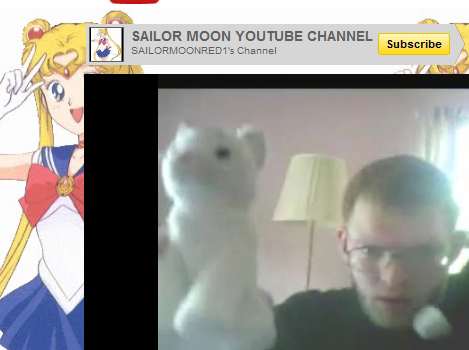 Normally, we here at the Awful Link of the Day division of Something Awful don't like to do YouTube channels, LiveJournals, MySpace pages, ThatKind of thing. But today, after weeks of scouring the Internet for miserable shit for me to read, our extensive network of employees finally found the one YouTube channel worthy to join our archives. Ladies and gentlemen, meet SAILORMOONRED1.

SAILORMOONRED1 is the kind of YouTube user who must make Google reconsider the whole "free hosting" thing. When forums moderator Zorak posted a link to his channel in the ALOD suggestion thread, SMR1 had 3385 hosted videos. Now, three days later, this motherfucker has 3414 pointless goddamn videos just taking up hard-drive space. By the time you read this, there will be more. I'm sure of it.

Now, I'm sure you're thinking that hard-drive space, especially for a big company like Google, is essentially free, so no harm, no foul. Shut your mind the fuck up; you haven't seen a video yet. Go ahead and watch one. Here, watch two. 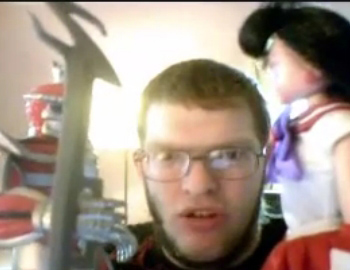 So, yeah, you've got some weird neckbeard posting Sailor Moon fan-fiction plays acted out by dolls while he reads off confusingly formatted scripts and sometimes wishes people (good Christians only) happy holidays. By the way, about that second video, which pits the bad guy from Power Rangers against Sailor Mars: He has one of those for every single Sailor girl whatever in the Sailor Moon cast. So if you're wondering how he puts up like 10 videos a fucking day, that's how, I guess. That and the fact that he constantly replies to other YouTube users' Sailor Moon videos while holding up/speaking in the character of two stuffed cats who I guess are probably in Sailor Moon.

Usually, when I'm writing an ALOD thing, I like to talk about the absurdity of the site, or take the time to forage around for a few particularly odd little hidden bits. I can't do that today. First of all, it's so absurd on its surface that trying to talk about it as anything but is a waste of all our fucking time. Second of all, again, 3414 videos. I clicked like six of them, and they were all incredible. It's not too much effort, just click around for a while. Hell, even if you just watch one second of every video, that's almost an hour of bizarre, nightmarish enjoyment for you and your loved ones. Have fun.