Hey all you college students! Are you looking for an exciting employment opportunity for the summer? Do you want to meet interesting people, learn useful skills, gain valuable experience, and be a part of one of the hottest, fastest-growing companies in the world? Well tough shit, fratboy. It's not going to happen. The best you can hope for is doling out soft serve to toddlers and stoners while listening to an endless repetition of "Pop Goes the Weasel" in an ice cream truck all summer. Oh yeah, that'll help you pick up the babes alright. Nothing says "I'm a virile and attractive individual with genes that would not be in the least bit detrimental to the survival of the species" like associating yourself more closely with screen legend Mack Hail. Face it, all the good jobs for this summer have already been claimed by people whose primary distinction is that they're not you. But don't despair! Sure, your earning potential for this summer may be in the crapper, which means you won't be able to afford that used Ford Focus you had your eye on, which in turn means you won't be able to drive your friends to that big concert like you promised, and your friends will be pissed at you and the band will be bummed, and you won't be able to get backstage where the band would have asked you to go on tour with them, which would have set off your wildly successful career in music promotion that would have eventually made you a megamillionaire, but at least your buddies at Something Awful are there for you!

This could be you! However, chances are equally good that it is not.

That's right, the opportunity of a lifetime is presenting itself to you like a skunk in heat. One lucky boy or girl (preferably girl, but who are we kidding?) is going to get to be the official Something Awful Summer 2004 Intern! As you can imagine, this will be a highly contested position, and we're looking for someone specific, so there will be quite a few qualifications that have to be passed before you can even be considered for this job. For instance, if you stopped to contemplate the imagery in the first sentence of this paragraph for more than seven tenths of a second, you're disqualified, you furry pervert. We promise not to discriminate on the basis of sexual preference, just so long as your preferences fall within the realm of human beings, and preferably ones who are not fifty feet tall, six years old, dead, hypnotized into a comalike state, or missing one or more limb. Furries most definitely need not apply. Or breathe. There are a few other qualifying features we're looking for, as well. These include the following:

- No Eskimos, Inuits, Igloo-dwellers, or any other resident of the Far North (including sasquatches).

- No discriminations will be made on the basis of religion. All applicants will be converted to the Church of Xenu, the wise galactic overlord who rules this quadrant of the universe with his stockpile of hundred of thousands of hydrogen bombs, which he acquired somehow. All hail Xenu! May his enemies be chained inside a thousand volcanoes!

- All applicants for the position of Something Awful Summer 2004 Intern must submit to a urine test. This is not a test to see what your urine contains. This is a test to see if you can urinate. We don't want to have any filthy, non-waste creating cyborgs sneaking into our hallowed office.

- Applicants must have already had chicken pox, mono, tuberculosis, scabies, and the plague.

- No really, no fucking Eskimos. They frighten Josh.

- Applicants must produce less than two fluid ounces of sweat per day on average. Lowtax refuses to lose the title of Sweatiest Something Awful Staff Member.

- Applicants must produce more than one fluid ounce of per day on average. Lowtax doesn't want to feel like he's the only one sweating, here.

- Applicants must admit that Sean Connery was the best James Bond, and that Roger Moore can suck it. 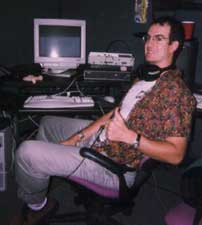 If you qualify, then read on. If not, you might as well click on something else along the borders of this page. This article has got nothing more for you, you goddamn sasquatch. But for the rest of you decent, non-cybernetic, non-yeti Xenu worshippers out there, you'll probably want to know what being the Something Awful Summer 2004 Intern is going to entail. Well, let me tell you, it's like a dream come true!* You'll get to see what it's like to be a member of the illustrious SA staff, including sitting in on brainstorming sessions, being privy to committee meetings, getting to listen in on staff pow-wows, being a fly on the wall during conferences, and getting complimentary passes for you and one other for the company picnic (which is held in the meeting room). But there's so much more!

Of course, we can't actually allow you to write for the site. The Something Awful staff writers are an elite team of trained professionals (except for Frolixo, who is really a couple monkeys in a suit). If we allowed just anyone to come in off the streets and post an article on the front page, we'd lose all of our claims to integrity, and when you're the world's premiere online satirical journalism website that does not also put out paper publications, your integrity is the foundation of the entire organization. If we let any old person post whatever they felt like, it would... well, it would be a lot like when I post, actually. In that case, it's my niche, dammit! Hands off! 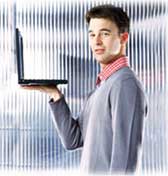 Our internship program will prepare you for a job in the real world, such as waiting tables.

To be completely honest, another item on the list of things we can't allow you to do is collect a paycheck. I'm afraid that the Something Awful Summer 2004 Internship is not a paid position, but if anything, that should form more of a camaraderie with the staff. None of us are paid. I've been working for the past year for a handful of candy corn every few weeks, and I only get that much because I managed to convince Lowtax that unless he gave me some sort of compensation for my work, he could never give me a pay cut. The other writers feel that they have a greater sense of stability since their pay can't really be reduced from nothing. Lowtax tried to pay Zack less than nothing once, but somehow it ended up with Zack owning a Humvee and a new house in Malibu. We don't know how. The point is, you're not going to be laughing all the way to the bank, unless you are especially amused by how little money you have and you just want to share your mirth and merriment with the bank tellers, who could probably use the cheering up. So you won't be writing for the site and you won't be getting paid. What exactly will you be doing? Read on and find out!

The Something Awful Summer 2004 Intern will have a number of crucial responsibilities. This is a business, and like any business, it takes a strong and capable team to keep it running. Unfortunately, all we've got is us, so you're going to have to do a lot of work. Rich "Lowtax" Kyanka needs to be moistened every half hour, or the dried sweat on him will solidify into an impenetrable glaze. Zack "Geist Editor" Parsons has it in his contract that someone debate World War II strategy and politics with him for twenty hours a week, minimum. It usually ends up going on a lot longer than that, but if you're smart, you'll keep it to manageable, four hour chunks. Josh "Livestock" Boruff needs to be walked twice a day, and you just try keeping that boy on a leash. He refuses to get the hang of going for his walkies. He's always darting back and forth from side to side like some sort of horrible human GIF. Reid "Frolixo" Paskiewicz has to be tutored at great length first thing every morning. The lessons are typically split between teaching him how to spell and pronounce his last name, and helping him figure out what day he actually updates on. Jed and Corin Tucker's Stalker are actually two personalities buried within the tortured psyche of a schizophrenic Appalachian mountain goat, so that raises its own set of issues, as goat feed is limited and expensive. Zachary "Spokker Jones" Gutierrez has severe emotional issues stemming from being the second, and let's face it, lesser Zack on the staff, so you'll have to help him build some confidence, and that means reading through endless mind-numbing crap forums with him in preparation for "The Weekend Web." As for me, I'll be your guide, mentor, and dealer as you go along this journey of what is essentially indentured servitude. As a short, scrawny, bald, disease-ridden, overly stressed college student with a nasty temper and a penchant for racial slurs, I'm by far the most balanced of the bunch. So as you can see, you'll have your hands full!

The Something Awful Summer 2004 Internship is not for everyone. Applicants must be friendly, courteous, witty, bright, capable, ablebodied, telekinetic, lilac-scented, able to create fires by thinking hard, made of chocolate, a professional athlete, seven feet tall, capable of befriending and training small woodland creatures, fluent in eleven languages including Esperanto and Dutch, and resistant to bullets. If you're a college student and you fit the requirements, then send in your application today! We can't wait to welcome you aboard! Well, we can, but we'd rather not, since the sooner you can get here, the sooner we can dump our massive physical and emotional problems on you and call it goodwill. Ah, summer...

The Weekend Web: An Implosion of Stupidity

The internet is a kind of fad. Most people who buy a computer and sign up with one of the many internet providers these days did it because it's the new "thing" they saw on last night's ten o'clock newscast. These people aren't surfing the internet because they want to learn anything about anything. These people aren't buying computers because they love technology. These people aren't posting on internet message boards because they have anything interesting to say. No, the internet is the new fad that everyone wants to get in on. And where there are people, there is stupidity. The problem is that so many people participate in this horrible experiment gone awry, the stupidity has reached critical mass. We just can't handle anymore of it. Something's gotta give. And soon you will see a mass implosion of the internet. And after the dust has settled we will wonder why things like this get posted.