Jerry Jones Is A Menace And Possibly A Scofflaw

Jerry Jones, owner of the Dallas Cowboys and at least one suit (perhaps as many as three), has been accused of sexual assault. This type of crime is extremely serious, but that didn't stop internet skeptics from chiming in with their expert opinions when the accuser issued a press release claiming that in addition to having a check for roughly three million dollars stolen from her purse and being "put in a coma" by Jerry's shadowy league of advisers with a dose of GHB, the following sequence of events took place on that fateful night:

"[A]s I was exiting the Ladies Room at the back of the restaurant Jerry Jones obstructed my exit and shoved me into the Ladies Room and sexually assaulted me pinning me against the wall and stating 'You aren't going anywhere. I planned this when you walked in.'

Mr. Jones sexually assaulted me in the Ladies Room and he had an erection when he pressed me against the wall." 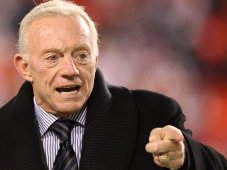 If the jaded and eager to judge among us are correct and she is making this up, whether for attention (she has filed charges involving celebrities in the past, asked Warren Buffett to buy her boots and attempted to subpoena Donald Trump) or money (the suit asks for $500 million plus attorney's fees, and she's representing herself), it's a sad situation.

If, however, the accuser is telling the truth, then she leads a tremendously fascinating life which came crashing down on one horrible night in which Jerry Jones revealed himself to be a comic book supervillian and everyone spoke as if they were in a high school moral play directed by Federico Fellini.

I don't care to weigh in on serious situations with only a fraction of the information, so I didn't give the story much thought. Until, that is, a string of case filings against Jerry Jones came to my attention.

Take the word of this Dallas area gas station attendant:

"I went outside to sweep the sidewalk at 1 AM and Jerry Jones was leaning against the wall loitering and he took a sip from a slushee and told me 'I planned this loitering all along.'

I told him 'Sir you have a nice football team. I congratulate you. Please move on.' Jerry Jones then loitered and had his Dallas Cowboys hold me in place and drug me with penicillin while he leaned against the building and looked around aimlessly."

Or this avid video game player from New Zealand:

"As I was playing Team Fortress 2 and trying to earn a hat for my Pyro, Jerry Jones messaged me privately and told me he worked for Valve Software and he needed to see my login details to verify my account.

I felt secure complying because he was Jerry Jones, but then he told me 'I planned this all along. Now your Steam account is mine and I can finally play Plants Vs. Zombies'

He then asked for my login details and I gave them to him but he told me it was a trick. Then my account was his."

Perhaps the most damning piece of evidence comes from the testimony of the vice president of the United States, Joe Biden:

"As I was entering the White House from the Lincoln Monument Jerry Jones leapt out from behind the Washington Monument and beat me up and told me 'I planned this all along'.

While wading in the reflecting pool I then congratulated Jerry Jones on his football team and said 'Your stadium has a large television screen in the center of it. You're doing an excellent job' but he beat me up.

Jerry Jones pinched my nipples and when I pulled my hands up to protect them he punched my stomach then grabbed my arm and rubbed it until it burned and Jerry Jones had an erection as he made me push the nuclear launch button.'

None of these filings have made it to court, and as always the accused is innocent until proven guilty.

Having said that, the overwhelming amount of specific and eerily similar claims have led me to reconsider this week's hunting trip with Jerry Jones. I should have known something fishy was going on when he told me not to bring a gun, and when he stated "I planned to hunt you all along."