Sunday, May 27, 2007 by Rich "Lowtax" Kyanka (@TwitterHasBannedAllMyAccountsEver)
Zack Greinke, the game's starting pitcher for the Kansas City Royals and THE MOST EXCITING MAN IN MAJOR LEAGUE BASEBALL, is a player not known for his talent throwing the ball, but rather for his talent throwing his career into the dumpster. All the scouts said he was phenomenal and possessed incredible ability and could eat raw locomotives, but then he came up to the big leagues and had a nervous breakdown and spent most of his day crying in a motel bathroom and trying to date the ceiling fan. He went to some psychologist a year ago and supposedly now he's "cured," which obviously means "on drugs." One time Greinke went to a grocery store and the cashier asked him if he wanted paper or plastic and Zack just broke down and began sobbing uncontrollably until Animal Control was called and they sedated him by unloading a barrage of horse tranquilizers into his face.

BONUS MP3: Zack Greinke explaining how he beat up his car and spent all night crying and shouting "why? Why?" when he learned Brad Pitt and Jennifer Aniston broke up. 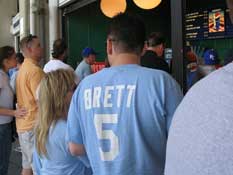 INNING #2: The Twins score a run but who cares about that, our personal space is invaded by OBESE LESBIAN WITCHES. I'm not kidding. Check it out: 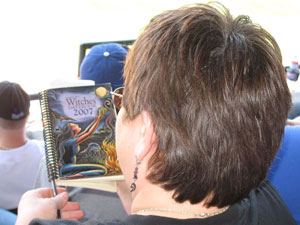 There were four of them, the ringleader carrying a prized copy of her "Witches Datebook 2007." You see, witches have much different datebooks than us non-witches. They have to order special copies of Microsoft Outlook / Calendar just for all their witchy days. Queen Witch was very much into her datebook, which makes me wonder why she bothered showing up for the game if she was just going to spend the whole time writing about ginseng and dragons and casting Vas Flam in her little journal. Boo! Go home obese lesbian witches! The Royals game is for abusive drunks, not witches! 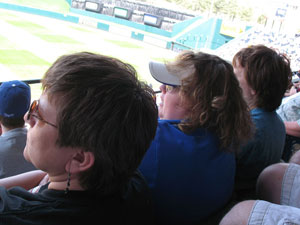 If you are foolish and casting doubts as to the existence of this fabled Witches Datebook 2007, I kindly ask you to visit Amazon and cast your greedy gaze upon its product entry page. Currently this wonderful tool is sold out, probably due to the massive influx of obese lesbian internet witches towards the end of 2006, but we can only hope esteemed author Jennifer Hewitson finds time in her busy schedule of being an obese lesbian witch to pen a followup entry for 2008 (year of the witch, unlike "Halloween 3," which was simply a season of the witch). Looking at the Amazon comments, it should prove to be another winner:

Again this year we are presented with the Week at a Glance Witches Date book for the busy witch.

Articles are always part of the attraction, and we are presented with a nice article on Hecate by K.D. Spitzer and my favorite *Tips for the Busy Witch* by Emely Flak. *Making Magical Inks* by Lynn Smythe is also another informative and interesting article.

As always, there is an address section in the back so you can take down important information on the fly. The book offers the basics for the neat and clean reference. It is pocket size and fits on the desk neatly. Handy tool to keep around.

A good overall presentation and one which I always find becomes part of my basic box of essentials.

A few questions: first of all, let's say you're not a "busy witch." You're one of those witches who just chills out and takes it easy and spends maybe only 20 minutes a day witching shit up. Is this book still a valuable investment? I've been seriously considering diving into the lucrative world of witchcraft, as my accountant claimed I can make "mad cheddar with spells and shit," but my wife won't let me spend the requisite 20 hours a day searching the swamps of Britannia for nightshade and black pearl. Should I save my money and instead purchase a chemistry set I can use to boil up some meth? 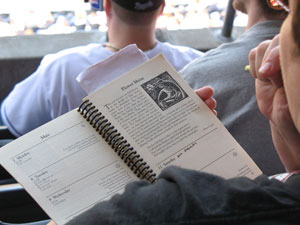 What's a better place to study witchcraft than a Kansas City Royals baseball game?Secondly, let's assume I am in fact a busy witch. Exactly what situation would generate a need for "an address section in the back so (I) can take down important information on the fly?" Would I be wandering around town, witching the hell out of the place, when suddenly I see like some kid making ugly faces at me, so I say to myself, "I better jot down that punk's address so I can ship him a box of evil magic snakes next Monday?" I don't even know what mail class evil magic snakes would fall under, especially with the stupid new USPS rules. It used to be priority mail, but now who knows.

Last of all, the reviewer remarked this book will become "part of (her) basic box of essentials." Do all witches have magic crates they haul around wherever they go? Exactly how large are these boxes? I know they must've been pretty damn huge for the obese lesbian witches at the Royals game, but I won't expand upon that because I refuse to cheapen this article with fat jokes. Haha, get it? I was referring to their vaginas. That's witch humor, you heathen saps.