This article is part of the Online Anarchy series. 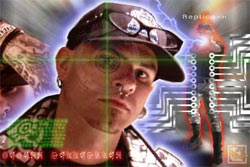 When the Internet first began to blossom so many years ago, it looked from afar like a beautiful rose made of dreams. That is, until you got close enough to realize it smelled like a gnarly crotch. But of course, with the nearly infinite amount of terrible information at your fingertips via your new Tandy in 1995, you can't say you didn't once consider building a potato launcher or a large molotov cocktail out of a cantaloupe. We all did, simply because the information was there. It's not like I set out to learn how to build smoke bombs out of Cream of Wheat, it was there. All the information we never even asked for was all up in our faces!

One staple of the mischief scene was a young chap who wrote many files that provided the world youth a means to go about stripping all governments everywhere of their power and to set into motion violent, anarchist revolutions anywhere they had computers. I'm pretty sure it never actually took hold, but it's fascinating to wonder about how the world would be different if our old friend XOZero had taken the reins of history.