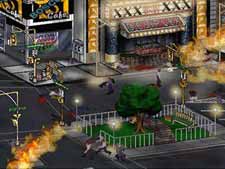 This screen from Postal may have flamethrowers, brawling in the streets, panicked civilians, and needless bloodshed, but it doesn't have any actual references to the Postal Service, so I guess it's A-OK.

Today's feature case comes to us courtesy of the hard-hitting reporting at PC Gameworld, a site dedicated to hosting as many annoying, unstoppable, intrusive, Internet Explorer-crashing pop ups as possible. The domain owners would hate to see their remaining space go to waste, so they frequently fill the gaps between monstrous ads with news about the latest happenings in the world of computer games. While I was there trying to download the latest fifty shareware Arkanoid clones, the following article grabbed my attention like a flaming gorilla:

The case, brought by the USPS in 1997, was widely considered to be a ridiculous waste of funds and has now been dismissed.

Six years after the United States Postal Service (USPS) sued the makers of the notorious videogame Postal and its ultra-controversial sequel, Postal 2, game developer Running With Scissors has been informed by the Trademark Trial and Appeals Board of the U.S. Department of Commerce that the USPS's opposition case had been dismissed with prejudice.

The case, which was brought by the USPS in 1997, was widely considered to be a ridiculous waste of USPS funds - especially considering the fact that the game had nothing to do with the Post Office or its employees; a fact apparently lost on then U.S. Postmaster General/CEO Marvin Runyon.

For those of you who don't remember how this case began, or just don't care, or care, but don't really have the time to concern yourselves with the details, let me give a quick refresher. The first Postal game followed the exploits of one man in his mission to shoot, blow up, and otherwise kill everyone and everything he came across. It was mindless, ultraviolent fun. The United States Postal Service didn't think so, though. They had no problem with the senseless murder and completely unnecessary bloodshed that comprised every second of the game. They just didn't like the name of the game. They were still a little antsy about the string of disgruntled postal employees coming into work with semiautomatic weapons and killing their coworkers. If you ask me, which you didn't, but I assume you eventually would have, I think the Postal Service should have just accepted the fact that everyone was going to associate them with random killing sprees ever since the Star Wars: Dark Forces game included the cheat code "LA POSTAL" that gave the player every weapon. 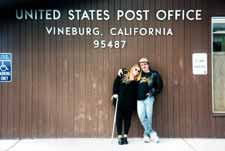 That couple was later sued for taking a picture of the words "post office" without the express written permission of the post office.

So, even though the original Postal had absolutely nothing to so with mail services of any sort, the USPS did what any patriotic American organization does whenever the opportunity presents itself - it sued. For six long years, the Running With Scissors company fought the nearly unwinnable fight against one of the US government's oldest and most valuable establishments. Meanwhile, games like Worms 2: Armageddon let players throw exploding pieces of mail at one another lawsuit-free. And of course, the Postal Service had to fund its massive legal assault somehow. Wonder why the price of stamps has gone up so many times in the last few years? It couldn't be because they have to pay more employees. They're all either in jail or dead! Here's what Running With Scissors CEO Vince Desi has to say on the subject: "It's friggin ridiculous to think that every time we or one of our fans bought a stamp, that money went directly into a campaign to put us out of business."

Desi is absolutely right. There must be dozens of other sources that the Postal Service could have used to raise funds in addition to siphoning stamp profits. They should have remembered that what counts in lawsuits - hell, what counts in this country - is not doing the right thing, but making the most money from all possible sources at all times. The courts may have finally dismissed the Postal case for being an outrageous waste of time, but there are plenty of other good and potentially lucrative causes out there. Taking my inspiration, as usual, for the absolute worst possible sources, I've decided to put my legal expertise to work and make some serious bank. My original plan was to team up with Something Awful Official High Powered Legal Attorney at Law and Legality, Leonard "J." Crabs, but he insisted that he was working on a number of important cases. Then he hurled a chair at me and informed me that he would very much appreciate it if I would get out of his office before he would be required to "fucking ice" me. I tried to tell him that he was not, in fact, in an office, but rather in the middle of the city dump, but then he broke down in tears, so I slowly backed away and decided to mount my own legal campaign. More money for me, anyway. So without any further ado, excluding the rest of this sentence, here are my latest sure-fire lucrative lawsuits.

Just look at his face. This monk is ready to unleash the fucking legal fury.

The Carpathian Monks vs. America Online

The world's most successful internet service provider and computer assimilator, AOL, may be a couple years behind in terms of actual internet technology, but they do have the honor of being the ISP of choice of the entire order of Carpathian monks. Or do they? I did a little research into this most holy of orders to find out just how much truth there is to AOL's latest ad campaign. A spokesman for the monks said absolutely nothing, since the order took a vow of silence in 1211, but you have to admit that landing a job as a spokesman and never having to say anything is a pretty sweet deal. I commended the spokesman on his sound career choice, but it got me no closer to finding out if the monks really use AOL. After a good deal more research, I discovered the shocking truth - not only do the Carpathian monks not use AOL, they can't even use computers! Their lifestyle strictly forbids the use of microtechnology and other such witchcraft. What's worse, because they can't watch television, the monks had no idea that they were being portrayed as avid AOL users! Basically the only details that the ad got right are the date that the order took their vow of silence and that they are in fact huge baseball fans.

Clearly, America Online and its advertisers are guilty of misrepresenting the Carpathian monks in a mass medium. As far as I know, that's close enough to slander to make a powerful nuisance suit. Now, obviously without speaking it would be very difficult for the brothers to present their own case in court, which is why I formed the Carpathian Monk Advocacy Group, which I head personally. I asked the brothers if they had any objections to my representing them or to my taking a fifty percent cut of the settlement, and they didn't say anything, so I think we can assume that the case has their full support. It pains me to think that there would be corporations out there that are so money-hungry that they would exploit these most noble and honorable monks. It's just disgusting. It's a good thing that there are people like me who want to see justice done. 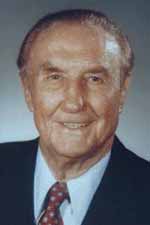 You're not getting off that easy, buddy. Not you or your smarmy tie.

The People of South Carolina vs. The Late Strom Thurmond

Strom Thurmond retired from the United States Senate last year. On Thursday night, he died at the age of one hundred. Coincidence? I, and the people of South Carolina, think not. For over forty-seven years Thurmond served as senator to the southern-most Carolina. The World War II veteran served eight full terms. After all that, he retired and died within the space of just one year. Sure, that's fine for you, Strom, but what about your constituents? What are they supposed to do, just go on pretending you're not their senator anymore like they did for the last few months? You'd like that, wouldn't you, deady?

If you want my opinion, there's something fishy afoot. When you're the kind of senator who can give a filibuster that lasts over twenty-four hours and still lose on the following vote in a landslide, you don't just retire and then go off quietly to die. No, Strom, you were in the Senate for life. The people of South Carolina owned your ass. They let you play your little retirement game for a little while, but no one ever said you had permission to go ahead and die. That's breach of contract, my friend. As the duly elected attorney for all of South Carolina (and also Wisconsin, although that has no particular bearing in this case), I will not rest until either you crawl out of your grave and get back to work or compensate your constituency for all of the grief and stress that you caused them. You can't escape litigation through death, Thurmond. You can't escape litigation through anything (your wallet not withstanding)! 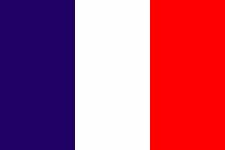 The Concept of Freedom vs. France

If there's anything that we can learn from the US Postal Service's lawsuit against the Postal video games, it's that you can sue someone if they try to use your name, even if that's the closest they come to having anything to do with you. While that suit may not have been victorious or actually reached a verdict before it was tossed the hell out of court, it still kept Running With Scissors locked in litigation for six full years. The spunky video game company may have had the moxie to ride out six years, but does France? Methinks not. Somehow a country with the nickname "Surrendertopia" just doesn't strike me as the kind of defendant that would deal with all of the hassle, harassment, and public humiliation of a lengthy court battle when they could just as easily settle for a few billion dollars. Yes, France is the perfect target, I realized that much to be true, but on what grounds could I sue them?

I'll tell you on what grounds. On the grounds of truth. On the grounds of justice. On the grounds of the American Way. I have decided to become the legal representative of the concept of freedom itself. Ever since France failed to back the American intervention in Iraq, all things French have been dropping their cheese-eating, wine-guzzling, beret-wearing moniker in favor of the label of "freedom." Sure, that's all well and good, but did anyone ask Freedom if it wanted to be used as just another word for "French?" I don't think so. So France thinks it can just run the good name of Freedom through the proverbial crepe? We'll teach those froggy bastards a lesson they won't soon forget or recover from, economically speaking. Viva la Freedom, indeed!

There you have it, three juicy cases just begging to bog down the courts for years to come. If you're a Carpathian monk, a resident of the state of South Carolina, or some sort of physical manifestation of the abstract concept of freedom, it's time to get excited about your legal and financial future. Remember, you've got me fighting for you, and I don't get a penny until you do! However, when you do get a penny, I expect it to be delivered to me promptly. Keep that in mind. Don't make me sue you.