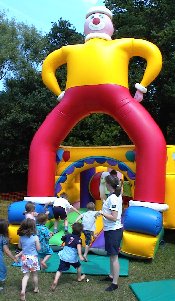 GET IN ZE CLOWN!

Welcome to another edition of Life Lessons, the only Internet learning program made entirely out of recycled aborted fetuses. Today we’ll be tackling the very serious issue of genocide in our culture, and how we can educate the public to stem the tide of this growing fad among the young people of today. Recently in the news we are hearing about the latest report of genocide in the African country of Sudan, whose main export seems to be endangered gorilla paw ashtrays, severed children’s limbs, and ebola pancakes. This surge of genocide in the region seems to be all the rage with the kids there who are more than happy to replace their soccer ball with the severed head of a slain foe. The Secretary of State, Colin Powell, has gone before the United Nations to discuss possible military intervention in Sudan in a hope to quell th violence by blowing up stuff with tanks. I’m sure we would deploy a batch of troops with Blackhawk helicopters (whose primary attack is crashing into clay buildings and exploding into flames), and then get shot at from all sides by men, women, and even children with specially made tiny guns that would be adorable if they weren’t so deadly. Of course it would end like all of our overseas operations; with a dead American soldier being dragged from a pickup truck. This unsettles the public because we are just used to people being neatly killed by an explosion or being impaled like in Schwarzenegger and Bruce Willis movies. No, military might not put a stop to this cycle of death. But what can I, a humble concerned citizen and registered sex offender do about it?

To first solve this puzzling aspect of human behavior, we must first look at what the word itself means, and how acts of genocide have been prevalent throughout our history. I have no fucking clue what the phrase “geno” means, but I’m pretty sure it is either Latin or Italian. Maybe “geno” might be the name of a dude that owed a mafia guy some money so his whole family was killed by the evil capo sporting a large handlebar mustache. I’m not sure what “cide” means either, but it probably has to do with being a jerk. Hey, I’m an Internet comedy writer, not all E=mC2 like that famous scientist guy, Albert Frankenstein. But don’t worry, I found some books in a dumpster behind my apartment (with heavy water damage) and did a little research on the history of genocide. Let’s look at a few examples.

Alexander the Great: Considered to be one of the greatest warriors and leaders of all time. Alexander was also famous for his ruthlessness and temper, especially when on the rag. I’m not totally sure that males menstruated in those days, but it supports my theory that B.C. stands for Bloody Codpiece, and A.D. stands for After Diapers. We may never know, but one thing is for sure, Alexander killed a lot of people in his quest for total domination. It is recorded that after besieging a city of 40,000 residents for a month he had all of its women sold into slavery and all the men and boys bound and thrown into the sea as a lesson to any other cities that dare oppose him. It is also known that he liked to talk with his mouth full, and never give a courtesy reach around when being sodimized by one of his man servants. A new Hollywood movie called “Alexander” is coming out soon, but I hear they will leave that part out and replace it with Alexander rescuing a baby kitten out of a tree. We can see the roots of mass murder in our ancient history, and it would only grow in scope with time.

The Potato Famine: The Irish have been a downtrodden race of blustery and ruddy folk for countless generations. The English, who made pissing people off by occupying their lands and instituting unfair taxes an art form, were the Irish people’s most hated nemesis. Around the 1846 a horrible blight hit the green isle causing all the potatoes to don moustaches, hats, and googly eyes. The Irish called it “The Mister Potato Head Disease”, and while it delighted children everywhere, they were totally inedible. The British, instead of helping the starving Irish, blockaded food supplies to the island, resulting in the death of over a million people. The survivors were shipped to Boston, fully armed with billy clubs, whiskey, and blue suits as revenge against their old enemy: America. Thankfully the Irish ingenuity with alcohol saved the island after they made the now famous Guinness draft that was hardy enough to save the people from starvation. It also made them into incurable alcoholics, but you have to crack some eggs to make an omelette. Unless you are making on of my budget omelettes that’s made out of sawdust and cheese-wiz. 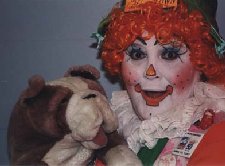 The last thing you see before you get on the train. I'm telling you, the clowns are organizing as we speak.

Jewish Holocaust: I did some research on the Internet and found out this is all an elaborate hoax. Boy I bet Spielberg’s face will be red when he hears this!

Cambodia: The story of the Killing Fields is complicated, so I’ll just sum it up for you. America bombs Cambodia during the Vietnam War because Nixon is desperate and hates all living things, destroying the infrastructure of the country. Then crazy communists called the Khmer Rouge take over and hit a few million teachers, doctors, and engineers in the head with a stick, proceeding to dump them in rice fields and giving Pol Pot sponge baths every three hours. Since all the teachers, doctors, and engineers are dead, the country is stuck in the medieval period, just hanging out in straw huts and playing the board game “Sorry”. Sure Pol Pot wasn’t the brightest guy in the world, but he was a good public speaker and could jump really high. Nobody in the global community ever tried to stop the massacre, but after Vietnam would you want to send troops back into the horrible jungle against more invincible little bastards in black pajamas? Instead we bought polyester suits and went out to the disco clubs, dancing the night away. I just found out that the number one song during the year of my birth, 1978, was Disco Duck. This is terrible news. 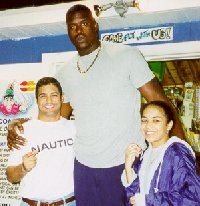 Shaq sez: "Say no to genocide".

The Balkans: The Balkans have always been a place of turmoil ever since Franz Ferdinand was shot, kicking off World War I, as well as Franz’s music career when he hit the top of the charts with his single “Take Me Out ”. In the 90's, Slobodan Milosevic committed genocide against the Croatians until NATO (Necromancers Armed To Obliterate) dropped a lot of bombs on stuff, putting a big hurt on the sloppy Sloby. Normally I really like bombing and massive air operations, but after watching all the NATO briefings in the morning with that white haired British guy, I was totally turned off. It was really the most boring conflict ever, but at least none of our soldiers were dragged from pickup trucks on this one. For now on we should just keep our boys in the air, or bomb all the pickup trucks in the country before going in. Then what are they going to drag our corpses with, a moped? I think not.

After all this evidence, its obvious that genocide is a natural symptom of our violent nature, spurred on by hate, ignorance, greed, and the Guinness book of world records. The only way we can stop this cycle of killing in the future is to educate our children on the dangers of genocide, and offer them sound advice on what to do about the peer pressure. I’ve even come up with a slogan that can be printed on t-shirts, hats, and bumper stickers. The phrase is “Don’t be snide, just say NO to genocide”. Sure it’s a little rough, but I’ll work the kinks out in time. As far as what kids should do in a situation where they are asked by peers to participate in genocide, here is a scenario that is the blueprint to the correct way to refuse the offer.

Once Bobby overcame the peer pressure to join in with the other children in an act of genocide, the cycle was broken, at least for Bobby. But for every Bobby we still have thousands of Billys. There is still a lot of learning and sharing to do still. I thought that the best way to communicate with the young generation would be a comic. Kids are dumb and love comics. So here is my anti-genocide comic that I like to call “Hitler Dog”. Enjoy.

So what did we learn today? For one thing, never leave your Hitler dog home by itself, or terrible things can happen. Also we learned that genocide is a very bad thing, even worse than Vin Diesel movies. We should follow the 10 commandments of the U.S. Constitution and “love thy neighbor” instead of gassing them or borrowing their hedge clippers and never returning them. Maybe one day there will be world peace, but I have a feeling it’s only going to come about once we round up all the extremists and violent people, put them in labor camps, and ultimately dispose of them so we can have a world only populated with a pure race of peace loving folks. We can only hope that day will soon come.