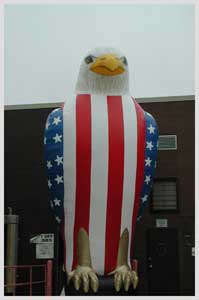 No matter what happens come election, we'll still have plenty of pride and giant inflatable eagles.The 2004 presidential election is a battle fought not just with heart, but also with other vital organs, bones, and joints belonging to the two leading candidates. It's also fought with minds, but not those of the candidates. Because elections are serious business, they are strictly controlled by a shadowy cabal of lecherous men unafraid to consume live human babies in rituals that pay tribute to our secret satanic alien overlords. The two candidates we have to pick from are George W Bush, who is mentally retarded, and John Kerry, who is some kind of asshole yet to be properly classified by science. Out of these two candidates there rests absolutely zero chance of a truly better world and, at best, a reduction in the amount of overall crapiness plaguing the world. Logically, we have to choose one or the other or the world will fall into chaos as black as the very bowels of Abe Vigoda. And if we don't like that, we must accept that the system is solid and there is no hope of ever changing it. Some protest this doomed situation by refusing to vote, an act that accomplishes nothing in the long run, and others cast their votes on the third party and independent candidates that make up America's nefarious Fifth Column.

In the mainstream world of the two party candidates, most issues relevant to Americans are either avoided or dressed up in goofy propaganda, like the hilarious "War on Terror" gag that's making its rounds. Instead we focus on important matters like whether or not George Bush dodged the draft, or weather or not John Kerry truly killed enough Viet Cong to be classified as an American Hero. Nobody bothers to mention that George Bush and John Kerry were both inarguably absent from not just World War I, but also World War II. Those were the two most important wars in modern history, so why did they choose to hide in the shadows while braver men gave their lives? Furthermore, both were noticeably absent from fighting in the recent wars in Iraq and Afghanistan, a clear indication they have no real interest in active participation in armed conflict.

With the two leading candidates obviously being afraid to fight while simultaneously making their past efforts to fight a leading issue, that leaves them both looking like pretty big goobers. The only other man running for president worth mentioning is Ralph Nader, who has roughly the same chance at becoming our next president as a large box of Fruity Pebbles cereal with a free NASCAR hologram trading card inside. But, in an interest in exposing people to new ideas, I want to dedicate this update to demystifying presidential candidate Ralph Nader. Although the press and most Americans may ignore him, he still wants to be our leader and we should at least hear him out. We should do the same for anyone who wants to be our leader. 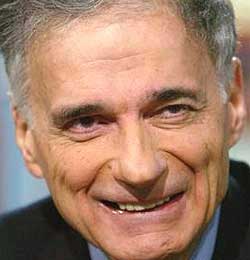 This is Happy Ralph! Hooray for Happy Ralph!Ralph is famous for many accomplishments, but most of all he is known for his excellent work voicing the character Snarf from "Thundercats."

Ralph invented the seatbelt, though his original intention was to trap his worst enemy in a burning vehicle. He later defeated said enemy by bicycle kicking him off of a cliff.

When Ralph learned that Starfleet Command was compromised by mind-controlling alien brain worms, he took action to prevent it from happening to America. Thanks to his tireless efforts, an independent committee regularly screens elected officials for the presence of alien brain slugs.

Ralph once received a bad fortune from a fortune cookie and successfully sued the nation of China for millions of dollars in emotional damages as well as an apology from the Chinese government. He used his winnings to buy every American a scoop of non-dairy ice cream.

Ralph has never been married. This is because he vowed marriage to his high school sweetheart who was abducted by aliens before the two could be wed. Since that fateful night when the visitors came, Ralph has dedicated his life to unraveling the alien conspiracy, reuniting with his lost love, and making sure nobody ever has fun driving a car again.

Ralph fought for years to prevent the series finale of "M*A*S*H" from airing, claiming Alan Alda's good looks were a danger to America. Years later we would come to realize how right he was.

When Ralph became vocal about the flaws in the automobile industry, he was briefly replaced with an identical robot under the control of the automakers. This switch was revealed when the robot malfunctioned and exploded in high orbit, sacrificing itself in an attempt to save mankind and seek atonement for its crimes. Two weeks later, a bearded and disheveled Nader showed up at the doorsteps of Congress and was promptly fed and given a change of clothes.

Ralph inspired the group called "Nader's Raiders," a fearsome band of marauders responsible for razing a number of cities and bringing the country to its knees. Up until that point nobody ever noticed our country even had knees.

Ralph is so adapt at living on small sums of money he never has to tap into his gigantic bank account. In an interview he revealed that he's saving his money up for a solid gold submarine so that he might one day explore his oceanic roots in regal fashion.

When asked what charity meant to him, Ralph responded, "I would define charity as the reproductive act between two circus clowns." He even had the pictures to prove it.

Ralph made two unsuccessful bids for president with a female Native American as his running mate. I'm serious here.

In the 2000 election, Ralph fought an unsuccessful bid to get on the ballot in Canada, hoping that would increase his votes in the election. He would have been successful if not for a group of meddling kids responsible for the startling discovery that Canada was and is a mostly sovereign nation. Or so they think. 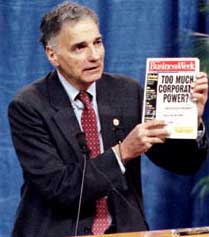 This shocking picture shows Ralph Nader undeniably holding too much corporate power.Ralph protects himself from larger predators by rubbing up against sea anemones, coating himself with particles toxic to other creatures. This is the real reason he's never been allowed in a presidential debate.

Contrary to popular belief, Ralph did not sexually molest Al Gore when he was a child. However, he did stage an audacious election hall robbery in which he stole a box full of Al Gore's votes. To this day, his guilty conscience gives personification to the box of votes. Each night the box cries out "Why?" in a scary voice while flapping its lid up and down. Ralph pretends not to hear it by covering his head with a pillow.

Whereas mainstream candidates strive to maintain the status quo at home at great costs to the environment and the rest of the world, Ralph aims to shake things up by getting us all killed in completely different ways.

Ralph is famous for the book "Unsafe at Any Speed," a thrilling cyberpunk-meets-fantasy story about people downloading their brains into cars and competing in illegal psychological street races.

Consumer rights groups that Ralph was instrumental in founding have made a substantial impact on America by helping to pass several landmark bills including the Freedom of Information Act. They were unfortunately unsuccessful in getting the passage of controversial No Fatties Act.

So that's Ralph Nader in a non-literal nutshell. He's got some great qualifications, and he certainly has the prerequisite "melting face" look demanded of all candidates. Is he deserving of your vote? You be the judge. But be warned, if you say yes, then you are wrong and not fit to vote. 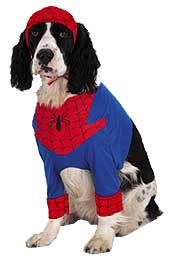 Figure 1.1A, a dog dressed as Spider-Man.I tend to feel that we have no qualified individuals running for office, and the only remedy to this problem is violent revolution so bloody that we have to travel around in boats. In this fantasy remedy, I am very muscular and I carry a sword, often taking time to stand atop a pile of my defeated enemies in a grand pose. From an entirely realistic standpoint, I'll never be muscular. This means that the chances of the violent revolution we so desperately need coming to fruition are slim to nil.

Where violent political escapist fantasies fail, logic reigns supreme. I have long advocated an overhaul to the election process guaranteed to remove corruption, voter irregularities, unqualified candidates, lack of variety in candidates, and all the other problems. In my system, the candidate who receives the most votes must consume the second place candidate within a 24-hour period. If the winning candidate cannot keep the losing candidate down for a second 24-hour period, he or she is not qualified to lead us and control of the country defaults to a dog dressed as Spider-Man (see figure 1.1a). However, assuming the winning candidate can properly consume and hold down the losing candidate for the duration of the mandatory time period, he or she will serve as President of the United States of America for a term of seventeen days, with checkout time being at noon. As far as I can tell, this system is completely foolproof, unless big business finds a way to train the dog to pass bills for them. But at the end of the day, I'm going to trust that the dog understands the noble credo Uncle Ben passed onto Spider-Man: "With great power comes great responsibility."

Yep, we're in good hands with that dog.