Questionable Lines From The Lincoln Movie

To the surprise of no one, Daniel Day Lewis has turned in a captivating portrayal of Abraham Lincoln in the new Steven Spielberg film. That said, some of the lines he was asked to deliver struck me as... odd. It's not that I'm a stickler for complete accuracy in a historical movie. I don't envy the writer that was tasked with condensing so many complicated issues and viewpoints into a two hour movie that would ring true to historians while being entertaining to a mass audience. Still, some of the dialog that was written for the Lincoln character could have been handled better.

"Washington, I only have one round left! Toss me another clip you wood-toothed son of a bitch!"

"There's still time to save the world. This crazy plan will work as long as we have... wait. Where's the constitution? I left it right here with Benedict Arnold. Where is he? What happened... I KNEW IT! I told you we should never have trusted him again!"

"Gentlemen, I believe this is what's known as a cloaca."

"Yes, I'd like to buy a hat. Something understated. Classy. It should... oh my. What about that tall number over there? On special order, you say? I don't care who that John Wilkes Booth fellow is, I simply must have the hat. I'll pay three times as much as he has!"

"I'll run for president. First, however, there's something you should know about me. I never learned how to walk. My method of getting about involves rolling on the floor with my arms held tight against my sides. There's quite a bit of hooting and hollering involved. I fear that this might be used by my opponents to dissuade voters from siding with me. Politics can be quite unfair."

"Down here, dear. I'm in the workshop. I've just invented something. Have a look. I call it: Freedom."

"Perhaps one day there will be a black president. I certainly hope so. Until then, I'll have to be the man that saves this country."

"They may have taken my arm, but they'll never take my mechanical replacement arm. It has a lock."

"It is done. I have tracked down my assailant. We engaged in hand to hand combat right there in Mudd's muddy field with the Union and Confederate armies both watching. It was perhaps the greatest wrestling match that has ever taken place under Earth's baleful sky. In the end, I emerged the victor, but I fear that the initial gunshot was a mortal wound. Dear, pass me that Emancipation Proclamation. I shall sign it as the last act of a wild and crazy life. No need for a pen. My blood shall serve as a stronger endorsement than any ink." 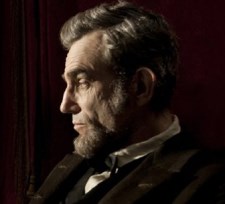 "Let me get this straight: It's the world's biggest diamond, in a safe owned by none other than Robert E. Lee? Of course I'm in on this heist."

"This log cabin has been home for many years. It has served me well, but sometimes I long for something a little more... white. A full scale gingerbread house with frosting."

"Why, of course we are going to win this war. It is inevitable. Gravity is on our side, my dear general. Once we begin marching south, our forces will continue down like so many snowballs. Those hicks will be defenseless!"

"I don't CARE if he's a wooden pig with a corncob pipe! He's my FRIEND. He has been with me since my early twenties and I won't abandon him now that I'm the president! He goes on that stage with me and that's final."

"Finished?" (Lincoln cocks his head with a quizzical smile, his heel on the throat of Stephen Douglas.) "I'm just getting started."

(A frustrated Lincoln sits at the presidential desk, his head in his hands. The floor is littered with crumpled up pieces of paper containing fragments of strange drawings.) "It's not right. NONE OF IT IS RIGHT!" (He rips apart a notebook and throws it.) "I have it all so clear in my head but I can't get any it on the paper. The whole world has to know about this. It's up to me to show them! Come on, Lincoln. You can do this. You can bring the people anime."