The Man in the Cheese Castle 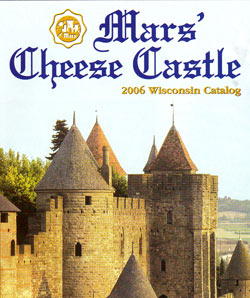 This cheese is well-protected!If Wisconsin is the arterial plaque basket of the United States, then America's deep vein thrombosis can be found tucked away next to Interstate 94 somewhere about midway between Chicago and Milwaukee. I am referring to the unassailable battlements and ramparts of Mars' Cheese Castle.

It is a fortification that has withstood the assaults of countless waves of wild-eyed Canadian barbarians drenched in maple and craving cheese curd. The tide of invaders has broken against its impenetrable walls and Mars' Cheese Castle stands to this day, a bulwark against the rampaging men of the north lands.

What drew me to Mars' Cheese Castle was a catalog addressed to the previous owners of our home and the promise of a block of cheese shaped exactly like a beer bottle. Who could pass on the offer of such riches?! Any true man would feel the ache to visit deep within his heart, the numbness and tingling of adventure in his left arm and the shooting pain of conquest along his left side. Not to mention the castle that looked so beautiful on the cover of their catalog. I had not seen a decent castle since I was ordered by the State of Texas to quit hanging around outside Richard Garriott's house.

With my barded steed Toyota and my faithful maiden at my side, I set off for Mars' Cheese Castle. I was sure to find, if nothing else, an adventure that would recall Olden Tymes. 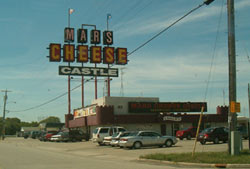 But...the moat?! The journey was long and arduous, my horse complained of thirst and foamed at the mouth, but I rode old Toyota hard. Before the old gelding collapsed from exhaustion I caught sight of signage on the horizon. I hammered my heels into Toyota's sweat-slicked flanks and drove the poor beast harder. We passed beneath a bridge, though fortune smiled down and neither brigand nor troll waited in ambush. And then, glorious sunbeams of the celestials broke through the dark clouds of a hard journey, illuminating Mars' Cheese Castle.

Alack! No castle was to be found by my reasoning. Some pitiful attempt had been made to add crenulations and archer's slits to a wood-frame structure, but even the most meager of Motte and Bailiey was an impenetrable fastness by comparison.

Where was the castellation depicted by their catalog? Where were the men-at-arms, prepared to lay down their lives and fight back the Canadians? As I hitched my steed beneath a sour apple tree I entered Mars' Cheese Castle, door unbarred and my way unchallenged by any watchman.

Once inside, the differences between this forteresse de fromage and a real castle became even more distinct. To describe to you the degree of disappoint I felt would not be an adequate means of sharing this sad story. I have, instead, painstakingly documented the differences.

Thus I stowed away my thees and thines and dassn'ts and shan'ts and I approached this castle as just another fat American looking for an artery to seal shut. Through these eyes the castle came into a new focus. I no longer felt the absence of guards and clanking dungeon cells, I felt the boundless joy of thousands of pounds of carefully aged cheese. Cheddars of every shape and description toppled from the shelves. Here was a six-year cheddar sharp enough to cut copper pipes and there was a black cheddar soaked in port. I found cheeses packed full of every imaginable herb and spice. Peppercorns, basil, sun-dried tomatoes, hot peppers, cranberries, blueberries, all had been shoved inside the soft body of the cheeses. There was even a selection of cheeses that had different types of cheese and sausage inside of that cheese. Soft brick surrounded smoked edam and firmer Colby wrapped itself around a decadent heart of pork sausage. 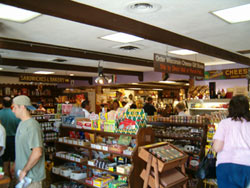 Cannot...resist... rustic delicacies. The bakery, with its enticing aroma of cinnamon and apples, offered a variety of different ways to eat cheese. Their specialty was cheese bread, but they had a wide selection of kringles, kolachkys and other cheesy occidental pastries that would feel right at home in a game of Mortal Kombat. Even if you thought you were done with the cheese and you just wanted a slice of apple pie, they offered cheddar cheese on the side to help the pie stick to your ribs.

I approached the cash register with a basket laden with the greatest calorie density physically possible. As the bored checker began ringing up my spicy mustards and Methuselah cheddars I experienced an epiphany. Mars' Cheese Castle was not the feeble defense I had mistaken it for when I entered. Though it boasted no curtain wall lined with archers and no legion of footmen ready to hack through enemy armies, it had a more insidious means of stopping the invaders from the north.

These Canadian corsairs would enter our fair maiden of a country and approach the castle with pillaging in mind, but they would leave with sacks full of food that would render them fat and tired. By the time they tied shut their saddlebags their bellies would be distended and their limbs would be feeble with the exertion of digesting so much food. They would simply collapse beneath a tree and enter a coma for several days or wander back, thinking they had managed to successfully pillage our country after all.

I laughed at the mad genius behind it all and then waddled back to my steed, eager to get home and try that fudge made out of cheese.