The Least Essential Issues of Marvel's 'What If?'

What If... Spider-Man's ability to stick to walls didn't work in bounce houses?

What If... Professor X hadn't seen an X flying past his window on that fateful night? 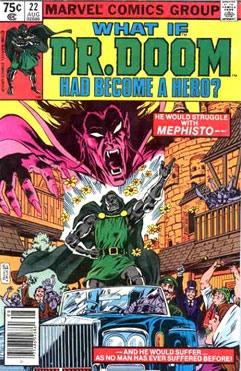 What If... Doctor Doom was allergic to peanut butter?

What If... Captain America wrote thinkpieces about video games?

What If... the Sinister Six were in line for an amusement park ride, and each car only seated five people?

What If... Wolverine was the height of an average man?

What If... no members of The Avengers knew how to ice skate?

What If... Daredevil just spent all his time letting peers pressure him into eating hot peppers and breaking boards with his head?

What If... Iron Man continued to display the flag from his losing side of the Civil War crossover event, insisting that it was simply a symbol of heritage and pride?

What If... Magneto received a summons for jury duty, and was unable to get out of it?

What If... The Punisher channeled all of his energy into a molecular gastronomy blog?

What If... the Red Skull became a master of disguise after obtaining an alien artifact that allowed him to change the color of his skull at will?

What If... the Incredible Hulk attended a murder mystery dinner theater, and his enlarged sense of social responsibility prevented him from leaving until he solved the whodunnit?

What If... Hawkeye discovered that his ability to hit any target with an arrow translated into an equal level of accuracy flicking paper footballs?

What If... Ghost Rider went to a dermatologist because a mole on his neck looked sort of iffy, but it turned out to be nothing?

What If... the Black Widow had a slightly thicker accent?

What If... Doctor Strange had never grown facial hair?

What If... Jean Grey didn't even own a television, and she frequently used her psychic powers to remind everyone?