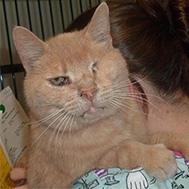 Agnes
Birthdate: 1996 (Senior)
Breed: Short Hair
Here is one purrfect (perfect) living legend! Agnes was born right as Michael Johnson won the 200m gold medal at the summer Olympics in Atlanta. Now in retirement, this kitty likes it slow to not at all, preferring to spend her time between naps wheezing out adorable hairballs. The volunteers here have grown to appreciate her habits, but what Agnes needs now is a kind owner to act as a kitty hospice. Perfect for people who might not want a pet, but enjoy the smells of an aging feline.
Adopt now! 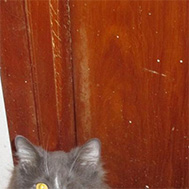 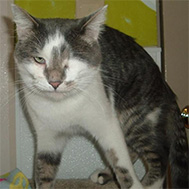 Jim Jim
Birthdate: 2012 (Adult)
Breed: Tabby
Jim Jim has come a long way! Found abandoned behind an Arby's, he has shown improvement with the volunteers over the past few years. Though shy at first, he is now comfortable enough to show his dominance over any other animal nearby. We're also proud that he no longer hisses at the television. Still a sufferer of kitty PTSD, Jim Jim is perfect for a house that has no other cats, no dogs, no adults with low voices, absolutely no children, and a minimum of mirrors. With an owner with the right purrsonality (personality), Jim Jim might possibly become a member of a household. Adopt now! 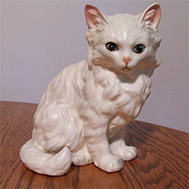 Gizmo
Birthdate: 2006 (Adult)
Breed: Cat
It's hard to imagine that Gizmo's been with us for almost ten years. All of us volunteers wish we still looked this good after all that time! Gizmo won't beg for company, but he is patient and does not mind if you are around. All around, Gizmo is a great cat in its purrest (purest) form. Due to balance issues, we think he would be best away from young children, though he's never bitten anyone even when we're working on his desk. You cat (can't) find a better cat out there! Adopt now! 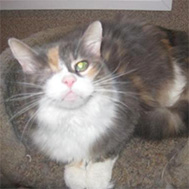 Godiva
Birthdate: 2014 (Young)
Breed: 4 Legs
This cat is a work in progress for any kind adoptee. No, not the eye thing, but sort of similar except internal. Godiva has tested positive for kitty leukemia, kitty AIDS, and lands somewhere on the kitty autism spectrum, so she needs to take special kitty meds twice purr (per) day. She loves food and doesn't mind coughing (her version of meowing) when she wants to eat. Declawed on left side only. Cannot be petted. Can you get a better cat out there? Meowby! (Maybe!) but this sickly little feline is full of heart (and we should mention that that heart is also full of heartworms.) Adopt now!