A Moratorium On Bad Features - Part 1 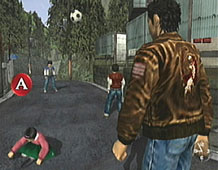 This was supposed to be the next generation for console games. My Playstation 3's cell processors should be teaming up with my microwave to render PS2 games in Pixar-like quality in realtime. A lightsaber should be searing through the entrails of a high-def Ewok in precise correlation with the movements of the Wiimote in my hand without using a single canned animation. My Xbox 360's hard drive should be overflowing with content designed by VelocityGirl for games that she has never played.

What did we get instead? Slightly better-looking games with promise that are undermined at every turn by horrible features. These are the concepts that need to go the way of Flagship Studios' credibility before we can truly move forward.

Please don't flash a colored symbol on the screen and ask me to press the corresponding button within 5 nanoseconds. This is the mark of a lazy designer who can't figure out how to let the player perform an action in the actual game instead of a glorified cutscene, and it never fails to make me feel like an asshole for having to look down at the controller.

The PlayStation's face buttons haven't changed since 1994 but for all I know they're all bright orange with tiny heiroglyphs of slaves harvesting wheat on them. Sorry, but I tend to look at the screen while playing games and my thumbs haven't mastered the sense of sight. I can't locate the button you're telling me to press without taking my eyes off the screen any more than I could find the exact point where my life went so horribly wrong.

Working your way through a Japanese game is like having one of those dreams where you start off in a Pittsburgh bowling alley dry humping some woman you saw in a LensCrafters commercial then find yourself in a submarine playing Jenga with sticks of dynamite. Everything keeps moving forward as if it makes sense, but none of it really does.

Let me get this straight, video game: The main character has amnesia as the result of a very recent experiment that made him immortal. He is also several thousand years old. Also, he can be killed even though he is immortal. Also, it turns out that this isn't the present, but the future, and the world is really Heaven. Now he's going to fight a half-ape half-zeppelin to prevent it from stealing a crystal that, if destroyed, would erase the emotion we know as "love" as well as anyone named Tim. Also, the crystal is the real Earth and it turns out the main character is just the physical embodiment of a dead vampire's memory but everything else is totally real.

Do I pinch myself to wake up from this bullshit or just... oh yes, there's the power button.

At the end of a timed challenge, you will either be relieved that the trauma you've just endured is over or frustrated because you failed and have to start all over again. Unless you grew up on a stopwatch farm, that's not fun. That's stress.

The people who play video games are either blissfully unaware of how short life is or are trying to find a momentary escape from stress. Is forcing them to drive a rollover-prone 18-wheeler truck with no brakes from one side of New York city to the other through rush hour traffic in thirty seconds going to make those people more or less likely to keep buying games?

Sorry, too late. Please start at the beginning of the article.

Operation Darkness
There is a special level of Hell set aside for people who mess up a premise as ripe as "turn-based strategy game where bazooka-wielding werewolves fight Nazis and vampires". 1/10

Alone In The Dark
The biggest scare comes when you realize how many Silent Hill games you could have bought with your $60. 4/10

Secret Agent Clank
Takes the secret agent theme a little too far by sneaking under everyone's radar despite being a really fun action game. 7/10

Guitar Hero: On Tour
Not bad, but I'm waiting for the edition of Rock Band On Tour that comes with Neil Peart's 40-piece drum kit. 6/10