Zack "Geist Editor" Parsons here with a brief announcement before the good Baron takes over.

We here at Something Awful just recently found out how those motherfuckers at SPEWS.ORG work. They have blocked roughly half of a class B-subnet in an all inclusive effort to halt spam originating from Cogent. This includes Something Awful's mail server and probably a number of other innocent mail servers. This means that mail originating from our subnet is going to bounce to a large number of people we try to reply to. No big deal you know, unless your motherfucking job depends on being able to interact with advertisers via e-mail.

I would like to take a moment to swear a solemn oath to bitch out SPEWS.ORG every single motherfucking day until they have delisted our mail server. These fucking villains are ten times worse than any SPAM senders out there. They have had our mail server blacklisted and offer no recourse but to bitch to our ISP about the problem. No motherfuckers, I am bitching to you infantile sons of bitches. I have to deal with more messages in a day than most people do in a week and I revoke any support I had for your cause of "righteousness" now that I understand how it functions.

I would suggest a letter writing campaign but I have no clue how to contact SPEWS thanks to their intentional obfuscation of any contact information. I know a lot of network admins and IT professional read Something Awful so I would ask you to PLEASE BOYCOTT SPEWS.ORG's BLACKLISTS. Because if we don't say no to these treacherous fucks one day you'll wake up and your server will be blacklisted too!

If you know how to contact these utter assholes let me know so I can e-mail them/call them/ and most importantly sign them up for every single SPAM mail list imaginable. 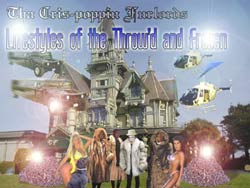 Lifestyles of the Throw'd and Frozen was freezee hot, but shit gotta stay on top to stay in the game these days.Yo, my name is Baron Ermine Von Icebeats (aka Zack-10, aka Dungeonmaster Fresh, aka DJ Teutonic Chronic) and you might remember me from a year and a piece ago when I busted out fresh on this Something Awful shit with my new ish "Lifestyles of tha Throw'd and Frozen". That shit sold like johnnycakes out the back of a truck with signs saying "find the free millions inside our johnnycakes". I know all you true hip-hop niggas be knowin my shit, but this ain't about L of tha T and F, it's about the latest rhymes to bust up and out of mah crib. I'm tellin you after the success of my club track from tha ice age things have been troubled times for me here at Glacier Ranch. The Johnsons done called the 5-0 on me so many times I set out a card table with donuts and coffee for their hog asses. Then I been hittin rock bottom. I drank so much Cris that my kidneys be passin platinum rocks with gems and shit all over them like encrustations or some shit and the government said I was using mineral deposits in my urine and shit to evade taxes.

Now that the bank is draining dry I had a religious experience when mah nigga Wayne Johnson and Minkles Corleone be havin a stone cold intervention. Minkles told me after I got straightened out and shit about this new religion called Vikings that is about warriors and so much ice you could actually climb on top of it and build houses out of it and shit. Minkles told me the blackest arts of the Vikings is called Negromancy and this really touched a nerve up in my heart. Straight up out of Ohio and shit I hit the library like ten tornadoes and was checkin out so much shit they gave me a muthafuckin platinum library card. Now that the academic and shit out the way I feel I am in touch with my Viking roots so I hooked it up with Wheeeeezeeee Jizzeezzzeeeeee on the tables and brought muthafuckin Minkles and Ice-2 D-2 the blingdroid hisself in for some straight cold tracks.

It was a reunification of talents and as soon as word got out I got all kinds of hoes and record producers and jewelers callin me and shit trying to get me to sign on they label or make another statue of myself out they Strontium. I just told all them straight up like my nigga Arnold to talk to my hand and then I started exploding like fifty kilotons in the studio. This shit ain't for no Hollywood hip-hop scene this was the streets, like back in the old days in the ghettos and shit. Just me, the Cris-poppin Furlords reunified and shit, and the Viking spirits up in our blood. The only nigga missin from making a complete reunion was Dubs McGemgrin, who had his head done cut off tragically in a diamond Ecko visor accident last Christmas. Dubs be up in Valhalla laughin about it all now, but he always was one to mess around with the ice and the chronic at the same fool time.

I thank Jesus and Odin every single day in that order for letting me have my head on straight and not be going over the top or nothin with the ice. Just a little around my neck like an anchor, and the wrist bands I got, and then that elastic ruby headband, and the reading glasses from Blingscrafters that they made out of diamonds with the platinum Flexor frames. Nothing crazy or nothing, not like 50 Cent. Nigga hits the big time and gets his muthafuckin jaw replaced with solid gold and call up Sony and have them make robot eyes outta emeralds that let a nigga see in the dark and shit. Crazy ass shit I tell you. I went to a booty shaker up at his pool one time this spring and nigga was stickin flashlights in his mouth and making lasers shoot out his eyes and shit. Damn near cut a hoes arm off with that craziness. Don't get me talkin bout no Method Man. Meth fuckin had his brain taken up out his body and put inna diamond robot body that was strong as ten of the baddest niggas around. Then his albums went all to shit cuz he got that "RARARAR" robot voice and shit and no one was buyin anything and he couldn't make no payments to the bank on his blingbot body. You see Meth lately? Nigga in a jar with wheels on the bottom got some fat white guy push it around and drop pieces of bread into the top. Sad states of affairs, I tell you what.

Ice-2 D-2 got a pass on that ish what with the car accident left him all cripped up when he was a shorty in A-town. Nigga even appearin on drunk drivin posters and shit back in the day.

Respect though, and back onto the hot shit comin out Glacier Ranch so hard you think the sound be stabbin yo ass with shanks. The disc is called "Negromancy: Tha Black Arts" and we explore all the Vikings religion and how it touched all up in my heart. We're still cuttin shit in the editing room up at Glacier Ranch but here is the track list so far. We got: 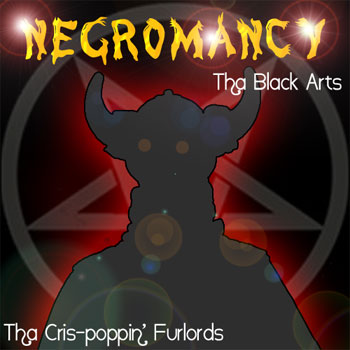 1. Straight Outta Asgard
2. Pox Upon Thine Nigga Who Done Sold Me the Broke-Ass Pentium
3. Ode to the Blizzizzard On My Neck
4. May the Horn of Vermillion Disgorge Hummer 2s
5. Call Ye Forth to Throw and Freeze
6. Slappin Skin With Freya
7. Set Trippin on the Aesir
8. Loki, Please (part one)
9. Sherm Kraken (feat. 50 Cent)
10. Loki, Please (part two)
11. Offering of Souls for my baby daughter Princess Freezee
12. Conjurin Tha Platinum Golem
13. Peace Out (The World Tree)

We a maybe release some other tracks straight up like stone cold skgrillaz and mix them up for Negromancy or bust them out on some B-Side shit. In the mean time I got some lyric I'm a lay on you for a track I'm working on for some other shit, maybe some shit with Eminem make it "Two White Knights" or some shit. Maybe get P-Diddy in on this since he trippin all over tributes. I call it "I Saw Dubs Standing There" and it's like a mixture of the Beatles and my own powerful mic skills in tribute to Dubs McGemgrin.

"I Saw Dubs Standing There" 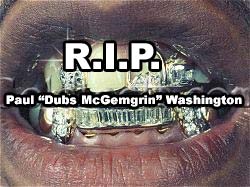 Well, he was just 17,
You know what I mean,
And the way he looked was straight up Crooklyn.
So how could I rhyme with another (ooh)
And I saw him standin' there.

Well he looked at me, and I, I could see
That before too long I'd fall into a profitable business relationship with him.
He wouldn't rhyme with another (whooh)
And I saw him standin' there.

Well, the bass went "boom,"
When I crossed that room,
And I held his hand in mine...

Whoah, we busted rhymes through the night,
And we held each other tight,
And before too long I fell into a profitable business relationship with him.
Now I'll never rhyme with another (whooh)
Since I saw him standing there

Well, the crowd jumped right
When we rocked the mic,
And I held his hand in mine...

Whoah, we busted rhymes through the night,
And we held each other tight,
And before too long I fell into a profitable business relationship with him.
Now I'll never rhyme with another (whooh)
Since I saw him standing there

See you on tha flip side Dubs, you a kep it real.

Hi, I'm Jedidiah "Dealer of Illegal Tek Implants" Kirchner and this is the alloted paragraph of introduction text for my latest Rom review. This week I tackle Attack of the Killer Tomatoes, a game that takes the movie franchise of the same name and sucks all the funny out of it with a giant bendy straw. Here's a sneak preview:

The one thing I did learn from Killer Tomatoes Eat France is that there's a huge enjoyment gap between watching a movie and actually being the main character in one. For instance, a small percentage of the population may enjoy Robin Williams movies, but I seriously doubt anyone wants to play a game about Robin Williams and the invisible leprechauns that will eat his brains unless he spends every waking moment of his life trying to act quirky and free-spirited. This isn't Attack of the Killer Tomatoes, this is sucking off a killer tomato for a ride home from the airport and then ending up 10 miles away from your house without any of your luggage.

This review is best read on a computer screen, but hopefully not a Sony Digiwall Holoscreen, because that would mean it's the year 3000 and everyone who writes for this website is currently dead and/or an ape.