The September 2009 issue of Spin calls Muse "the biggest band America doesn't know anything about." If only that were true. I wish Muse fandom was a uniquely British music phenomenon, like giving a shit about anything a member of Oasis has done since 1995, so I would never again have to encounter anything from The Resistance. 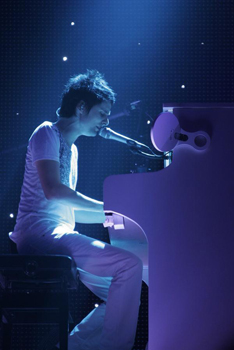 Every breath you take is loud as fuck.

Back in 2001, Muse was at the height of its likability. Even then, the group was overwhelmingly baroque, playing pseudo-progressive space rock while singer Matt Bellamy gasped desperately between falsetto wails. But its first two albums had tanked in America, and the chasm between the group's utter lack of success and its over-the-top pretensions gave it an irresistible pathos. It was almost charming in its harmlessness, like some homeless guy wearing a crown and making grandiose decrees. Since then, Muse has graduated to playing stadiums in England and arenas in the United States, enabled by a fanbase that encourages its every grotesque musical overindulgence. And Bellamy has established himself as pop culture's most beloved noisy mouth breather since Darth Vader.

If its music manifested itself as physical wealth, Muse would serve as the catalyst for the revolution Bellamy's always babbling about, because people would be so repulsed by the wretched decadence that they'd storm the group's gold-plated rocket castle. This sonic ostentatiousness is the reason why only one Muse album (at most) need exist. It doesn't matter which one you choose, just that anything more than that is too much. Muse fans claim each release is distinctive, but when dealing with distilled excess, anything past a single serving produces diminishing returns.

Muse actually managed to alienate some fans with 2006's "Supermassive Black Hole," a song that frightened them by sucking in a way that was new and different from the way its other songs sucked. But the band attracted even dumber supporters to replace them, especially after that tune's inclusion in the moron magnet Twilight. Emboldened by that success, Muse has gone from a group that continually rehashed its unique brand of pompous wankery to one that keeps trying new sounds, despite -- or perhaps because of -- the fact that these experiments fail spectacularly.

On The Resistance, Muse demonstrates the coma-inducing qualities of its newfound diversity by combining power ballads, R&b slow jams, and an extended lullaby of a symphony. When I grew tired of their pop pandering, they responded with twelve minutes of quasi-classical meandering. I scoffed at Bellamy's hoary sloganeering, then recoiled in embarrassment at his romantic prose. Eventually, it became clear that anything I wanted was something Muse can no longer provide. 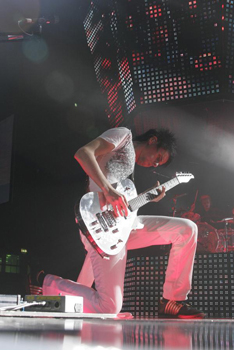 Not many solos on the new album, maybe Matt's knees were getting sore.

Even some Muse fans realize it's absurd that Bellamy rants about "red tape" and "fat cats" like some fuddy-duddy crackpot, but their excuse is that he recognizes the absurdity as well. Apparently, these lines are all tongue-in-cheek, and he's simply singing in character as a rebellious hero in a fictional realm. However, Bellamy has gone on the record in support of the 9/11 Truth Movement, so it's not as though he doesn't willingly associate with people who use these phrases on a daily, if not hourly, basis.

More importantly, even if Bellamy were performing some sort of parody of half-baked political acts (say, Green Day), and he boldly chose to do so with the album's lead single/first track, it's important to note that the majority of his fans aren't in on the "joke." When they pump their fists to "they will not force us," they actually believe they have a celebrity ally in their delusional war against the imaginary new world order. It's irresponsible to encourage these idiots.

Musically, this ridiculous pastiche combines Marilyn Manson's glitter-march backbeat with a synth rip of Billy Idol's "White Wedding" riff, adding a healthy dose of the band's own "Knights of Cydonia" and the chanted "hey" that self-consciously provocative groups always use to evoke some sort of fascist rally aesthetic.