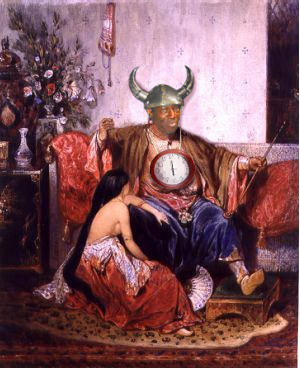 Fig. 3. Sir Flava cuts a ravishing Figure with Lady Notop, formerly known Minutes before as Miss Chastity Prudence.You cad, I remarked to Goldbuckets, this man is from the Asiatic region, where much Adventure is had and also Where the Sun is remarkably close to the Earth, hence his Perplexing colour and different Chronological systems; why for him it always seems to be six o'clock, or party time as he calls it. Flava Flav, Sir Flava shouted in response to this, filling his hand with fleshy white Buttock; I felt a Swoon coming on but I held fast as Goldbuckets emptied his tobacco pipe and daintilee sniff'd my hand in a Display of pure Masculinitee. You some kinda Fag, G, Sir Flava ask'd Goldbuckets, to which Goldbuckets proudly replied, yes, this must be your Word for man, so good sir, we are all Fine fags, now come inside and the Faggory will commence.

It took much convincing to convince Sir Flava to enter the Doorway of Goldbuckets, but upon seeing my Embroidery circle he stated, G, that what I like about this century, it's full of white women, you know what I'm saying, and I Acknowledged that I indeed knew what He was Saying. There was much of a Fuss when Sir Flava met upon my Ladies group with much Fondlement, but I said to the women, these are his ways, allow him a Handfull of flesh at the most, and avoid any Probulation. They conceded to this, and Sir Flava had his way with them, Leaving me Rather put out, and causing much Harrumphing from the groups of Men who did not agree with his Behaviour, but no amount of throat Clearing would Sway Sir Flava. Sir Goldbuckets Decided to intervene, shouting, good sir, have you the choleric Temperament, I demand you Cease this and join us in the Pipery; after this Sir Goldbuckets cast a glance at me that would have made me Swoon had I not already been lying on the floor due to the Exhaustion of being forc'd to stand for nearly One-Quarter of an hour.

Sir Flava followed Sir Goldbuckets into the Pipery, where much Pipe-Smokery was being enacted by the men. And now for the main attraction, Sir Goldbuckets stated, and with this he remov'd a curtained-off area of the room, revealing a large Bear tied to a Post, for the Intention of Merriment. Aw man, Sir Flava stated, this is just like in my old neighborhood, cept instead of a bear we used a retard, he regrettably added, which was me, for real. Goldbuckets did not know what to make of a Comment of this Nature, so he smoked his Pipe with much fury as the Dogs were brought into the Room. Let's get this party started, Sir Flava said, throwing handfuls of dice onto the floor of the Pipery. As the dogs surrounded the Poor Creature, the men stood by Stoically while Sir Flava whooped, get that bitch, get that bitch, get that bitch. The bear, a fearsome Creature, made short work of the Dogs, at which point things became Dull, but Sir Flava had a solution, involving spinning his body upon the floor in a Manner which we had never seen Before. The bear, bloodied and Matted, did not know what to make of this, so it fell to Sleep, but this did not stop Sir Flava from spinning, which lasted Upwards of twenty Minutes.

When the occupants of the Room reached the Maximums of both Leaning and distraction, Sir Flava stopped spinning and began to burrow through the Stomach of the Bear, much as he did before with my Skirted area, but at This time his intentions were not to Moisten his Hangparts. Blood and Gore flew everywhere, and Sir Flava worked his way deeper Into the Creature, which seemed to Be in Distress, but I gather'd it's lack of Emotions prevent'd the Beast from feeling pain. When Sir Flava emerged glistening from the Beast, his arms were full of what looked like Rubies, the very same Rubies we keep in our Front window so that we may Hurl masonry on the Peasants who wish to look at them. Sir Flava said, yo, check this out, G, time Crystals, just like the Professor been saying, now I only got twenty minutes to go forward in time and take out that Hitler nigga, for real. I did not know who this Hitler fellow was, but it sounded like a nice Wealthy name, and I did not want to cause someone of this Status distress, so I implored Sir Flava to stay. Nah, G, you fine and everything, he said, but I only got twenty minutes fore the time gate closes, and the government said if I do this they'll forget the forty-seven million in child support I owe, word.

Sir Goldbuckets was rather Taken by this fellow, and showed Sir Flava an offer of Hospitality, saying, my dear brown friend, you must come with me to the opium den in Celebration, where we will remain until its Mystic Powers dissipate; come, let us wipe scent'd oils on those Bear intestines plastered about your Person! Upon hearing the word opium, Sir Flava clenched his Gold teeth together tightly and ground them together, sparks shooting out of His mouth like Fireworks as if a King was being coronat'd right here in this very Pipery! Yeah man tight, I can crash for a few weeks, he said, man that opium is off it, Flava Flav! It was at that point I realized that I would have to One day choose between these Fine two men, but I was happy to have met Sir Flava, whose Countenance would no doubt shape our world. I made a note to ask Sir Flava of this Mr. Hitler, who I would be glad to add to my Train of male admirers, but the Circumstances of that Event are best sav'd until Later times.