Clark lifted his forehead from the sidewalk, groaning as a discarded wad of chewing gum valiantly straddled the gap between his face and the cement before snapping in two. He absently wondered what flavor it was. Its outer layer had been covered in a fine dusting of black grit, and the inside was a neutral shade of brown that could have once been grape or cherry or steak. For the second time in his life Clark was thankful that his face did not have taste buds.

He got to his knees and dusted himself off, glancing in both directions down the street to make sure the fifth graders were gone. There was nothing to be seen save for a few lanky dogs ducking into an alleyway in search of untold treasures buried within the dumpster behind a Thai restaurant. Good. He was safe for now, and at least they had only taken his lunch money this time. Those fifth graders sure were jerks. Part of him wanted to fight back just once instead of keeping up this timid act, but Clark found solace in being the bigger man.

Looking down at his watch, he frowned. Crap. Late again.

Seven minutes later, Clark stepped off the elevator and into the dull roar of the Daily News Planet's main offices. Phones were ringing all over the place, hundreds of fingers were frantically mashing away at dozens of keyboards, messengers were weaving through the labyrinth of cubicles with practiced grace, and the journalists who weren't screaming into their phones were grumbling to themselves about deadlines. A solitary shoe, unscuffed and seemingly expensive, sat on the floor in the center of the room. Its owner had either lost it and been too busy to put it back on or had been trampled and crawled off under a desk to die.

"There's our star reporter now! Great Caesar's ghost, Clark, What happened to you?" It was Perry Whitt, the newspaper's editor-in-chief with Lois Lang in tow. Knowing Lois, she was probably in the middle of pitching another one of her impractical story ideas and telling Perry to clear a spot on his shelf for the Pulitzer. "You look like you got into a fight with Caesar's ghost -- and lost!"

"I uh," Clark stammered, "wasn't looking where I was going and I sort of walked right into an open manhole."

"A manhole." Lois repeated with an eyebrow raised. "Clark Kemp, I swear you're the clumsiest man I've ever known."

"That's me, all right," he replied as Lois reached out to brush the leftover dust from his suit. Though she prided herself on being tough as nails, she was a pretty woman whose skin was creamy and soft. The simple contact of her hand brushing against Clark's chest made his breath stop. Suddenly he wished he could tell her the truth about himself. "Clumsy."

"Clumsy and a lousy dresser. What the heck are you wearing under that suit anyway?"

A small tear on his pants leg, no more than an inch wide, revealed a layer of bright blue spandex beneath. Drat! It must have happened when those fifth graders threw him to the ground.

"Do you always wear pants under your pants?" Lois asked with a wry smile.

"Here's an idea," said Perry, "why don't we focus less on Clark's hidden layer of bright blue clothes and more on our jobs? In case you haven't heard there's a nutjob running around in bright blue tights trying to be a hero and the whole city is talking about it. I want you two to get to the bottom of this, and whichever one of you has the biggest scoop gets the front page."

With that he made his way back to his office, carefully sidestepping a very nice shoe and upending an unsuspecting messenger and a suspecting photographer in the process.

"You know, you might as well take the rest of the day off. You're a nice guy, and that's why I'll win. You've got to be ruthless to beat me to a story." She swung a playful punch at the meat of his arm. Clark whelped in pain and fell to the floor, his glasses spinning to the floor. 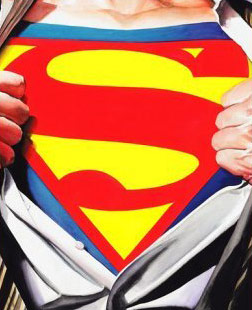 "Oh Clark, you really are hopeless" she said, helping him up. "You're not too bad looking but you'll never find a gal at this rate. A woman wants to feel safe in her man's arms. She doesn't want them to be so frail she's afraid of breaking them."

At that moment he wanted to tell her his secret more than he had ever wanted anything that wasn't made of aluminum. She'd understand. Maybe it would hurt to know he had led a double life all this time, but she would come around and they'd be happy together.

No. If she knew who he really was then that would only put her at risk. Who knew how far his enemies would go to get to him?

"I suppose you're right, Lois. The heaviest lifting I've ever done was my college textbooks." He reached down and scooped up his glasses, his fingers slipping through the holes where lenses would normally go if he had actually needed to wear glasses. That's another hint about his secret!

Jimmy Molsen stumbled out of the elevator, stopped momentarily to place his hands on his knees and catch his breath, then brought the entire office to a halt.

"There's a kitten stuck in a tree down the street!", the plucky young photographer shouted before collapsing in an exhausted heap.

There was a moment of complete silence. Just a moment. Then the flurry of activity in the office increased tenfold as everyone in the room with a brainwave rushed to cover the breaking news. Even Comatose Frank seemed to twitch in his swivel chair, though there's no real way of knowing whether it was genuine enthusiasm or a mild stroke.

Lois turned from the commotion to ask Clark if he wanted to share a cab, but he was nowhere to be found.

Three blocks away, Clark made his way up the tree. Well, not Clark. This was the other identity which he didn't have a name for, the one in the spandex outfit with the cape. The large "S" emblazoned on his chest would be good to work with. Maybe he could call himself something really impressive and superhuman, like Steve. The name would come in time, but what mattered was being out here, doing stuff like this. He was tired of pretending to be something he wasn't. Tired of losing fights to fifth graders and wearing those goofy glasses.

Clark reached a hand out to the cowering kitten, and it cooperated by jumping directly onto his face. He cried aloud as he tumbled to the ground, the kitten savagely bapping his cheeks with vicious paws the size of cotton balls. Clark struggled as hard as he could but the kitten was relentless in its gentle attacks. Finally the old woman who had called for help diffused the situation by picking the kitten up. Civilians getting tangled up in the affairs of superheroes were susceptible to great harm, but luckily everything turned out okay.

"Thanks, I guess." said the old woman as she frowned at the multitude of bruises and scrapes on Clark's face. "Do you want some rubbing alcohol for that?"

"No thank you, ma'am, no drinking on the job. Besides, knowing I helped is thanks enough." He blinked several times, then gingerly pressed his index finger to the corner of his eye, searching for something. "Perhaps I can ask a favor of you after all. Would you mind helping me find my contact lens?"

The following morning Clark's eye was drawn to a newspaper machine on his way to work. Through the smudged window he could make out the headline, "Caped Man Beaten Up Again!" The byline went on to highlight his beatings at the hands of various supervillains, bank robbers, pickpockets and jaywalkers over the past few weeks. Several concerned citizens were even collecting money to buy him a helmet. Clark smiled. He was really making a difference.

From up the street there came a familiar whistle, followed by the pounding of three young sets of feet upon the sidewalk. Clark ran as hard as he could but the fifth graders overtook him easily, just as they always had. As he took the beating, Clark smiled to himself. If these kids only knew the sorts of people he was capable of being beaten to a pulp by, it would totally blow their minds.