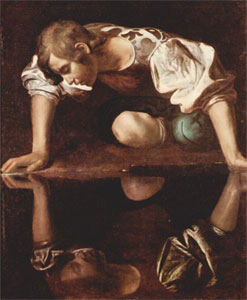 MY BEAUTIFUL REFLECTIONYesterday the news media took a short recess from banging the hell out of Anna Nicole Smith's rotting carcass to drop this shocking informational bunker buster on the American people: college students are shitheads. This stunning revelation comes courtesy of a gang of psychologist thugs eager to bring everybody down. Yeah, like they don't have a financial stake in telling people they are flawed.

Instead of doing something practical like brainwashing people into becoming CIA assassins, they gave a bunch of college students something called the Narcissistic Personality Inventory evaluation, and a huge majority turned out to be - you guessed it - narcissists. In fact, it turns out that this is a watershed age for narcissistic college students. There are apparently more alive now than at any point in the recorded history of the beleaguered narcissistic peoples.

From my own uneducated standpoint (I studied graphic design, thus I am homeless and I eat discarded sandwich scraps from garbage cans), saying that college students are narcissistic isn't really saying anything at all. It has been my experience that people between the ages of 18-22 are generally lousy no matter what they are doing. As a former member of said demographic, I was very lousy during those years. Thus, I know from firsthand observation in the field that college students are, on average, lousy people. Sadly, even with my keen observation skills I am not a scientist, though I do share their passion for starting fires and hurting animals.

What is causing this narcissism epidemic? That's right, it's none other than the dreaded hydra monster of positive reinforcement!

"We need to stop endlessly repeating 'You're special' and having children repeat that back," said the study's lead author, Professor Jean Twenge of San Diego State University. "Kids are self-centered enough already."

For years, being special was the dominion of the mentally handicapped, that mysterious race of smiling giants lumbering through the corridors of the world in search of cookies and cartoons. We stole their word form them and applied it to everyone, including mundane little boys and girls with no interesting characteristics whatsoever. It is time we give it back to the retards and smack the hell out of these boring little kids with nothing unique to offer the world.

Once upon a time children worked in factories and had no time to be special or self-centered. If they stopped even for a second to think "I can't wait to blog about myself in the mirror today" they would lose a hand in the gears of some horrifying and inexplicable machine that may well have been designed for the express purpose of amputating limbs from careless children. Even now in some countries children are spending all day picking through dumps looking for food, clothing, and anything of value to prolong the toilsome hell they call life. In this country, children are lied to from birth, conned into believing that they are miracles and unique and that one day they will be astronaut farmers or beauty queen detectives. They are even encouraged to document their insipid lives on Youtube, Myspace, and Livejournal for the entire world to see. BUT THEY WILL NEVER BE TRULY HAPPY.

The study asserts that narcissists "are more likely to have romantic relationships that are short-lived, at risk for infidelity, lack emotional warmth, and to exhibit game-playing, dishonesty, and over-controlling and violent behaviors."

Hah hah, you'll never summit Maslow's pyramid now, you emotionally stunted goons. Aside from explaining the rise of ladder theory and the mystery method, what does this really tell us? First, it tells us that this generation of people is horrible and rotten. Second, it tells us that it is perfectly okay to deny children encouragement, lest they grow up to be monsters devoid of souls, roaming dimly lit bars with backhanded pick-up lines.

If there is one good thing to come out of this it's that maybe we can stop pretending Asperger's is a real disease. Congrats nerds, you can't talk to girls because they are all narcissists. It was never you. You're cured! Update your Wikipedia entries accordingly.

This news doesn't really seem all that depressing until you factor in the other harrowing epidemic plaguing America: obesity. I can't quite tell yet, but this country is either divided into two warring camps of narcissists and fat people, or we're all just a bunch of fat assholes. Either way, I would say that our future is looking pretty grim. Maybe we should do what a lot of fat people with bad personalities do and appear on the Dr. Phil show. He'll yell at us in that incomprehensible and condescending language of his, and we'll cry our fat little eyes out and agree to stop eating so many pot roasts and open our hearts to love.

And then we'll go home and beat our children to remind them that they are in no way, shape, or form even remotely special. Unless they actually are special, in which case we'll just let them play Nintendo in the other room with a plate full of cookies.