Mobutu Sese Seko is a blogger and freelance copywriter and, as such, he is made of money. He supplements his income with assets embezzled from the nation of Zaire from 1965-1997. He last stopped by to talk to us about Death Panel. You can read more of his political/pop-culture criticism and dick jokes at Et tu, Mr. Destructo?

A year ago, a poorly phrased Google Alert for content related to my Web site (Et tu, Mr. Destructo?) sent me to a blog I didn't expect to find: Miss Destructo's. I was talking to an occasional contributor at the time, and we immediately tried to work out what this meant. Now, obviously Miss Destructo was neither my wife nor my daughter, but both could at least conceptually be plausible, a potential gimmick post for somewhere down the road. This had to be investigated. 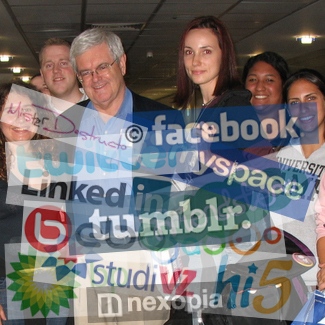 Nothing says 'first-rate judgment' like reinventing yourself as maven of the hip social scene and including unironic photos taken of you with Newt Gingrich.

Early results were not promising. The blog itself, Destructo Deviations, had a polished design but little content. In her "about" section, Miss Destructo described herself as having "a slight addiction to twitter," so that seemed to be a place to start. Now, beyond the fact that this was the sort of non-affliction that screamed "First-World Problem," it only vivified the paucity of blog content. The blog had only a few dozen updates of a few paragraphs each. The Twitter feed had more than 10,000 tweets and about 10,000 followers. Most people with a blog and a Twitter wind up creating the latter to promote the former, but here the blog seemed to serve as little more than an over-140-character bio section for the Twitter itself. More tellingly, the nearly 10,000 followers were met by Miss Destructo herself following nearly 10,000 people.

For those not familiar with Twitter, etiquette suggests that following anyone who follows you is a good way to "hold on" to new people and to show that you are an active user. To a certain extent this is true (I hemorrhage followers because I don't return the favor), but it's also not a measure of anything meaningful. For instance, just tweeting the words "Monetize your blog" will get you a half dozen new followers, many of which are bots or people whose singleminded salesmanship seems so automated as to make no difference. "Following reciprocity" is the sort of thing practiced by those who think that he who has the most followers wins, a reliable sign of quantity over quality.

It's also a polite fiction. Wonkette, with a bunch of interns, can follow tens of thousands of people and scour messages directed "@Wonkette," but no individual has any hope of engaging even a few thousand people earnestly. Unconcerned attention-seekers filter users by visible lists on their Twitter feed, and those who want to disguise the emptiness of their following "everyone" merely make an unseen list of "people I give a shit about" on a program like TweetDeck. The illusion of friendship or interest is handily maintained by software that screens out undesirable or uninteresting commenters without their knowledge.

But we're getting ahead of the story.

Twitter is no way to write an autobiography, so we turned back to Miss Destructo's "about" page and found this:

Miss Destructo hails from the swamps of the south, currently starting a blue-haired revolution in Tampa, Florida while destroying social media boredom worldwide. I am a ultra tall, sarcastically crass, swank, classy dame of the creative persuasion. Also highly uncoordinated, somewhat of an insomniac with a slight addiction to twitter and 80's music videos. Destructo Deviations is about destroying your boredom with life, whether it be your career or your hairstyle ... our motto here is that nothing is impossible.

Ouch. Again, not promising. Classy people don't tell you that they're classy; they just are. Creative people likewise show without telling. And only terminal naïfs and Republicans bent on linguistic co-optation manage to make it a year or two out of college without abandoning the idea of "revolutions." Also, there was something crushingly depressing about the idea of starting a revolution based on hair color for the purposes of destroying "social media boredom worldwide."

Centering your revolution on destroying boredom already requires peering deeply into sidewalk-puddle levels of existential crisis, but at least that addresses something innately human and universal. But when your mission is to annihilate the ennui of using social media, then either your Playful-Facetiousness-to-Text program is broken or you are. Of all the endeavors mankind could embark on, helping people cope with being cheesed off that "MySpace sucks now" displays a spangly level of shallowness akin to building a time machine and returning to Dachau with a BeDazzlerTM to make sure that the camp victims got to bling out those boring yellow stars.

I know what you're going to say: Making a time-travel analogy involving concentration camps is ridiculously extreme and unpersuasive. But I want to remind you that when it comes to destroying boredom, nothing is impossible. There are hairstyles and everything.