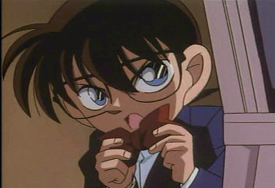 Conan has the power of perception and the ability to disguise himself as any of the more popular models of ventriloquial figures.In the summer of 2004, when I was but a young, apple-cheeked 22 year-old, Adult Swim premiered a show that would undoubtedly change my life forever. As opposed as I am to my generation's love of ironic enjoyment, this new show yielded far more entertainment than printing a list of Chuck Norris jokes from the internet and sitting down on a decaying couch with a bottle of Popov to watch Chuck Norris: Karate Kommandos. For one, the show I will be discussing today is not responsible for the existential dilemmas that the aforementioned activity causes in over 90% of its victims, who, in turn, produce volumes of "work safe" e-mail joke lists. No, the topic of today's article is more than just a piece of kitsch. It manages to be so spectacularly bizarre and terrible on every conceivable level that it's a candidate for being the greatest work ever crafted by human hands. The show is Case Closed, and I miss it dearly.
Case Closed, known as Detective Conan in Japan (or Meitantei Conan if you want to be punched in the face), is an animated series that has been running in Japan for approximately 500 episodes. And, thanks to Japan's madness-friendly workplace, all of these episodes have been produced in only the last ten years. Case Closed is so prolific in Japan that the country's population often confuses events in the show with reality; this has led to a complete breakdown of the country's legal system (as portrayed in the realistic Phoenix Wright game series) and mass pickling of things that should never be pickled. 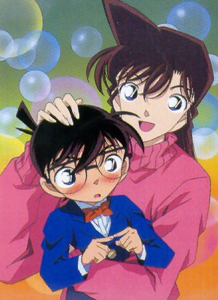 Mischief and romance at The Lawrence Welk Show ^o^;As with any long-running anime, American licensors were willing to hang from the teat of the Case Closed mega-cow, swinging pendulously as precious money-milk sprayed them and their co-workers like an out-of-control fire hose. But Case Closed held a secret. A dark secret. For what on the surface appeared to be a cute cartoon about a little kid solving mysteries held more depravity than 14 Caligulas combined (based on the National Caligula Depravity Scale). Fortunately, these unexpected elements of the show appear in the very first episode. I would have given anything to see the Fox Box executive wiping fresh vomit from the corners of his mouth after watching a roller-coaster decapitation via grappling hook in Case Closed's very first episode. It wouldn't be much later in the run of the show before Case Closed featured a killer who pretended to be fat in order to transport severed heads in his hollowed-out sweater.
This is why I fell in love with Case Closed.
Later in the decapitation episode (specifically, the roller-coaster decapitation episode), Case Closed would create the premise that the remaining 2000 episodes of the show would build off of: Jimmy Kudo, the show's protagonist, witnesses yet another crime after solving The Great Decapitation Mystery. The criminals attempt to poison Jimmy, but as is the case with all non-fatal poisonings, he regresses in age instead of dying horribly. I could relate because, as a child, I drank a delicious glass of Pine-Sol. Since I was not immediately rushed to the hospital, I transformed into a fetus after my stomach was pumped. This is why the ravages of puberty have not left my oily hide.
Knowing all of this, the Funimation corporation, after exhausting their supply of Dragon Ball Z, decided Case Closed would be their new cash cow. While the broadcast and DVD release of the show would all become spectacular failures, Funimation touched the lives of me and my friends by turning us into annoying jackasses who have inside jokes about a cartoon no one ever watched. But I write this to spread the Case Closed virus to a new audience, who will soon baffle friends and family alike with discussions about idiotic concepts like poison coffee being negated by antidote cake. Let's continue. 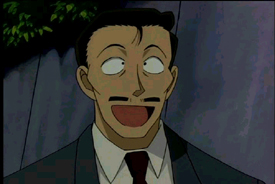 ( 8DTo get to the heart of why Case Closed is so captivating, it's important to expand more upon the premise. Jimmy, now using the pseudonym "Conan," finds himself shrunk from teenager to small child. He still wants to solve mysteries, but in Japan, children are given no credibility, and, even though they can summon Gamera at will, children are primarily known for being so damn sexy. So Conan is then inexplicably allowed to live with his friend Rachel and her detective father, Richard, and he can inexplicably not tell his real identity to either of them. Richard is an incompetent detective who gets drunk and hits Conan (often at the same time), which is supposed to be a quirky character trait but actually provides shocking insight into the domestic violence problem in Japan. But, in a way, Conan deserves constant beatings, since when it's time to solve the crimes, he must tranquilize Richard and use his voice-modulation bowtie (all while staying at least two feet away) to speak through the unconscious detective's mouth in a cruel perversion of ventriloquism. This happens so often that Richard's body must be falling apart faster than Judy Garland (either now or in the 1960s); and strangely enough, Richard never really questions why he blacks out more than John Belushi.
Previous More Front Page News Next