What up hockey hos?

Shit is hot as hell up here in Wasilla. Yesterday it hit 73 and I had to take off my shirt in the bob evans parking lot. The ladies love my ripply torso. So many fat girls screaming I thought somebody was shooting up a lane bryant. So of course with a crazy heat wave paralyzing the permafrost what do I decide to do?

Go down south to hang out with my cousins in south alaska. They live on kodiak island in this seal hunting village my cousin Boomer calls nunchuck because it has a native name we can't pronounce. Mostly I hang out with Boomer, who owns a fishing boat he salvaged after the earthquake in japan sent a bunch of free fishing boats our way, and my cousin Number 3, named in honor of American hero Dale "the eliminator" Earnhardt who died a hero on the field of battle.

So me and Boomer and Number 3 were out on Boomer's boat throwing dynamite at orcas and Boomer was like "did you hear that this rap man Pitbull is coming to Kodiak" and I was like "no way man I've been busy with this owl spirit" and he was like sure sure because he knew about me dying and coming back after 19 minutes braindead and how I shouldn't be here anymore but now I see an owl in the shape of a man who warns me about future danger. It's actually super gay (no offense gays) because this owl dude will pop up anywhere anytime. 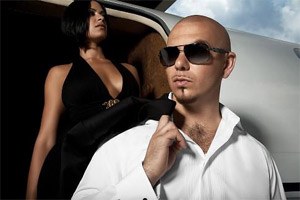 Dude you can call me dolly like three times and get a pass but do it one more time and keep slopping dr. pepper on that girls back and I am going to yoke you bad.Like I will be standing at the checkout at Three Bears trying not to impulse buy all the batteries to throw through car windows and suddenly the world will go dark around me and everyone else will slow way down and then this owlhead man just appears standing back by the customer service desk and I'm like ohhhhh fuck I died again and there will be native singing and these glacier creaking sounds and then the owl man will reappear super close to me and intoned in his creepy beak-not-moving owl dude voice "beware the awakening levi" and "the death of death approaches" and shit about wendigo and then sometimes he will give me a tip like "fire will rise in the west" and sure enough later in the day plugging a power strip into a chinese christmas lights to run my refrigerator will cause the west side of my townhouse to catch on fire.

Yeah, thanks for fucking nothing you bird nostradamus just straight up tell me what is happening next time instead of giving me riddles. Yeah okay death of death that makes sense I remember reading about that in 8th grade. NOT. Stupid fucking owl dude.

Anyway, Boomer and Number 3 are all pumped up about Pitbull who I guess is going to shop at Walmart and throw a concert there because some dude named David Thorpe who supposedly writes articles for this stupid website and some other thing posted on twitter. I don't know. I don't know how any shit works anymore. It used to be the only contests you had to fill out a card and put it in a box and then never win a vacation. Now I guess having a rapper fly to alaska is a contest. 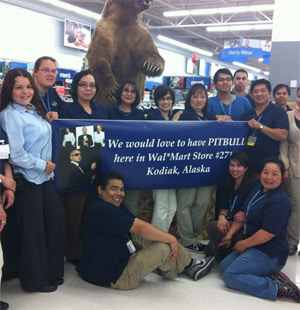 This is literally the most historic thing that has ever happened in kodiak alaska other than the UFO in 1994.But the weird thing about this was I know that dude. I met Pitbull when I was doing a GQ photo shoot a while back. I thought he was a roaming gnome or some shit, but then some lady who brought me coffee was like "nope that's pitbull he is a rapper." So I was like "what up dude I rap also want to drink some champagne in the VIP and start a fight with Puffy's body man?" And this pitbull dude was like "Hell yes dolly I want to party and get it on my kodak s5005 camera and upload my party pics to sokodak.com." That was pretty cool he started freestyling and the ladies were all over him and then he was like "we got to get bud light in the twist bottles" and I said "what??? I don't think they have those here" and he kept calling me dolly which was cool at first but I was getting pissed. 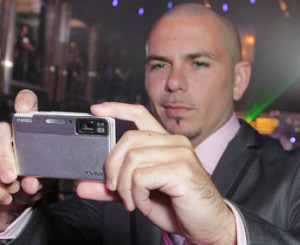 Way to snitch on a dude 2012 style pitbull.Next thing I know pitbull and drake are uploading, editing and sharing photos of the incident on sokodak.com which is enough to get me in trouble for violating the bullshit parole I got for driving into the toys for tots box outside the bank and busting the toys for the tots whoever the fuck tots are. Sounds like racist shit to me. Meanwhile nobody cars I opened up a big gash in my eye on the stupid fucked up dash of the bronco because I guess you got to make tot bins weigh a ton for who??? Maybe next time don't make them look like they would be sweet as hell to crumple up with your 4x4.

That sent me back to Alaska faster than the time I got caught taking a picture of the helicopter to trump casino while I was fingering some girl I think might have been a bush daughter but I might be thinking of lynn cheney on a sharper image submarine headed to the sexmurder boat in international waters. Anyway, boom. Picture gets around and it's right back to wasilla for violating the bs parole I got for biting a forest ranger. Yeah next time don't creep on me when I have been eating mushrooms out in the woods for a day straight and drinking nothing but moose blood red dawn style.

The point is, I'm pretty excited about Pitbull coming to Kodiak, Alaska's walmart which is a great place to go to buy Big & Rich CDs. I know me, Number 3 and Boomer will be there.