The Possible Extinction of the Entire Human Race? 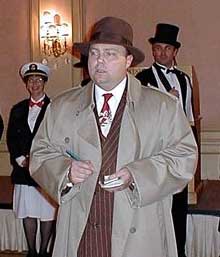 You may have noticed a certain tension, a particular unease in the air recently. You may have claimed you were just imagining things, unaware that millions and millions of people around you were experiencing the exact same feeling. So what exactly is this suffocating malaise covering the country like a wet diseased blanket? Is it nothing to worry about or is there a more serious problem that could destroy our entire way of living and cast society into an irreversible downward spiral resulting in the extinction of the entire human race? According to some world-renowned scientists, the outlook may be even more chilling than previously expected. Join me, Detective Stive Gonzales, as I examine a catastrophe just waiting to happen in today's special SA investigative report, "The Possible Extinction of the Entire Human Race," where I probe the hard-hitting questions other websites are afraid to ask. Can you save your family from this imminent crisis just waiting to happen, or are we all destined to die in horrifically painful and gruesome ways? Stay tuned after this brief commercial break. 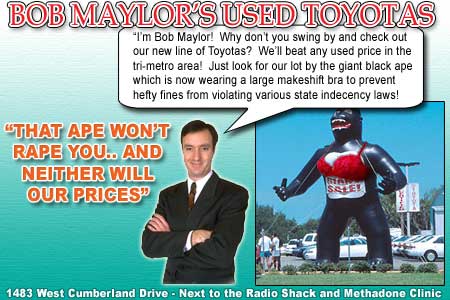 Welcome back. I'm Detective Stive Gonzales and today we're investigating one of the most unnerving claims repeatedly being trumpeted throughout the offices and institutions of America. It seems like a day cannot go by when we, average innocent American citizens susceptible to a wide variety of exotic diseases which I covered in my previous investigative report, "One Million Casual Ways to Die," don't hear the same statement trumpeted over and over again: "children are our future." Education specialists unilaterally agree on this unquestioned assumption, and such a familiar phrase has been repeated by highly respected individuals such as President George W. Bush (the current President of the United States) and Rabbi Barry H. Block (Jewish person). So if all these seemingly intelligent, responsible people running our country agree that children are the future, it obviously must be a fact, right?

WRONG. I've done an in-depth investigative report of this outrageous claim and have unearthed some chilling facts which could very well threaten the lives of our family, friends, and loved ones for decades to come. Let's imagine that children are, as these folks claim, our future. I recently interviewed a class of third grade students at Lincoln Elementary School so I could get a better look inside the minds of our future leaders to determine what our future may hold. I was shocked and appalled by what I discovered, and the results may just paralyze you with fear. Try, if you can, to imagine a nightmarish world that resembles an ideal paradise as described by this cross-section of individuals described by our own president as our very own future: 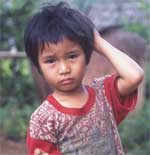 Does this look like somebody fit to lead our country?

HARROWING VISION OF THE FUTURE #1: "A world where mommy is happy all the time." (Steven Morris) - A frightful scenario reminiscent of an Orwellian "1984," Steven brazenly suggests that the future will include forced medication of adults by their cruel, tyrannical children determined to subject the very folks who gave birth to them. According to this student, kids will not only grant themselves the authority to prescribe medication for members of their own family, but they will additionally feel no remorse when their own mothers are forced to roam the Earth in a zombie-like state, doped up by countless drugs designed to remove any emotion but ignorant bliss. With the rising costs of Medicare, how can our society afford to pay for this unnecessary service? Our great country will lie in economic ruins, many members of the population transformed into numb, tranced automatons at the mercy of their own offspring.

HARROWING VISION OF THE FUTURE #2: "I would make it so the sun always shines and its (sic) always warm." (Katie Bradshaw) - The Earth's ecosystem has suffered through countless shocks, but I doubt anything could prepare our fragile world for the immeasurable chaos Katie chooses to casually throw us into. Mankind has been unable to control even the most basic forces of nature, so what makes Katie believe that the world of the future will be populated by mad scientists like herself powerful enough to control the universe? A hefty investment into governmental research and development isn't enough, so I cannot help but fear that our future leaders simply do not understand the most basic macroeconomics, and this concept chills me to the very bone. Ignoring the obvious monetary concerns, let us imagine a world where "the sun always shines" and "its always warm." Our global climate would be devastated, resulting in the destruction of countless specials of animals and worldwide catastrophes such as flooding and deadly droughts. I don't think I even need to paint a picture of a world with no day and night cycle, as the mere concept alone is enough to worry even the most liberal physics majors.

HARROWING VISION OF THE FUTURE #3: "My doggie Nickels would be alive again." (Teddy Bernsen) - The history of necromancy is rooted in shadowy organizations who believed in human sacrifices and devil worship, sometimes to bring upon the end of the world. Will tomorrow's leaders congregate in occult meetings under the full moon at midnight? Will such Satanic organizations assemble behind our very own houses and seemingly "safe" neighborhoods? Sure the life of "Nickels" may be saved, but at what cost, Teddy? At what cost?

While these quotes may speak for themselves, I decided to penetrate the heavily fortified halls of Lincoln Elementary School, searching for some photographic proof that our educational leaders do not want you to see. What I found was even more shocking and revolting that I previously imagined. I'll reveal one of the most sinister and horrifying discoveries to ever be revealed right after the following commercial advertisement. 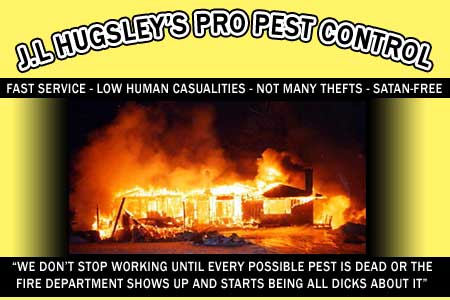 Welcome back to Detective Stive Gonzales' special "Chilling Look at the Future" investigative report. During my cloak-and-dagger infiltration of the heavily guarded Lincoln Elementary School, I was able to penetrate a secret back room labeled with an ambiguous plaque reading, "MISS ROSE'S CLASSROOM." Fortunately the door was unlocked and I was able to sneak in and take this photo before I heard a suspicious noise and escaped through a closed window before security could be alerted to my presence: 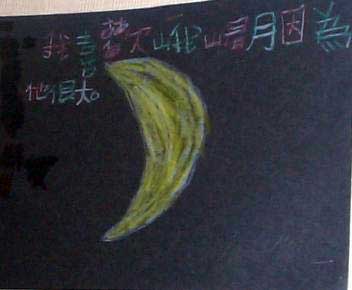 What sort of cryptic message does this chalk diagram represent? Why are our children, supposedly the finest minds and the chosen race of the future, creating such bizarre works behind closed doors where the authorities are powerless to regulate them? Does this image have something to do with genetically engineering obscenely large bananas, fruits so heavy that only genetically engineered superhumans could harvest them? Or is this a crude pictogram of the moon, the target of Katie Bradshaw's eternal disdain? Note the odd symbols above the yellow object. I believe these markings are an indecipherable code created by our future leaders to allow them the ability to communicate with each other while confusing the rest of us and keeping their plans secret. Do these kids really sound like the ideal candidates for future world governments?

Simply put, the answer is no. I asked a leading team of research scientists and experts their opinion of a future run by these so-called potential leaders. Their answers will petrify you, so more sensitive viewers are recommended to stop reading after the following commercial break. 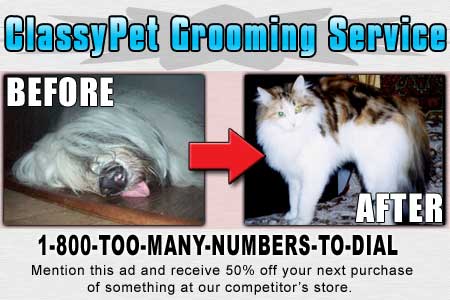 Children; are they really our future, or perhaps a deadly threat that will lead to the downfall of society as we know it? I posed this question to a few leading specialists, and their candid replies may terrify you to the core. 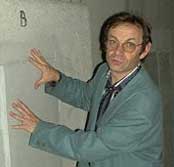 "The prospect of living in a world full of undead housepets, forced medication, catastrophic flooding, global droughts, and gigantic fruit scares the hell out of me, and I'm not ashamed to admit it. I don't think our society should be based upon such unconventional factors. I received my PHD in economics, so I'd say that our society should probably focus more on economics and less on reviving animals."

When asked if he would prefer to live in a world where all his tax money went towards eliminating the Earth's rotational spin and therefore causing eternal daylight, he responded "probably not." 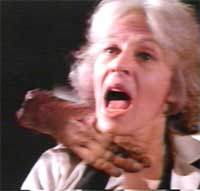 "I cannot, even on a conceptual level, comprehend an effective or remotely functional way to cross the boundaries between life and death, particularly for the purposes of reviving deceased dogs. If we're going to spend so much time, money, and resources attempting to reverse the effects of death, why are we going to do it for a dog? Is somebody actually suggesting this? I've never heard of such a proposal. That's simply ludicrous and makes a mockery of the scientific industry."

NOTE: Joan Baxter was later found dead in a garbage dumpster, having been strangled to death. Was this possibly the work of our future leaders?

Are children really our future, and if so, what type of apocalyptic disaster does our future hold for us? Is there any way we can survive through the upcoming crisis to be caused by the reckless immaturity of our upcoming leaders? With such ringing endorsements from education specialists and powerful elected government officials, it appears as if it's only a matter of time until we find out if we can withstand such a catastrophic impact. Next time you see somebody in a business suit brazenly state, "children are our future," perhaps you should think twice and consider exactly what type of future these tiny people have planned for us. This is Detective Stive Gonzales signing off for another exclusive Something Awful "Chilling Look at the Future."

I was a poet and didn't even know it!

Ryan "OMGWTFBBQ" Adams sippin' on Gin and juice here. A few days ago, Forum Goon Admiral started a thread with the with the following premise:

"While browsing the considerable bookshelf at my girlfriends house, I noticed this little gem. A charming picture book illustrating 101 amazingly fantastical things that can be done with a Baby. Of course, these things were all rather dull, so I took the time to scan the book to see if anyone could come up with some more amusing things to do with tiny ankle biters."

So the Goons got to work. And after filtering out most the "lol pedo lol" jokes, we get this week's Comedy Goldmine, "101 Things to do with a Baby."