The Worst of Vegan Culture!

Veganism is a lifestyle whose practitioners ("vegans") do not eat animal products. (In the case of animal products such as leather shoes and glue, they don't eat these either, but they also refrain from using them in other capacities.) Like any first-world lifestyle or movement, it's a complex issue with both personal and societal advantages and deficits. If you want to know more about veganism, ask a vegan! (If you're not sure if you know a vegan, that means you don't, because they would have already told you about veganism.) Anyway, veganism has birthed a mini-industry that churns out some insane, awful, and harmful products. Sure, vegan culture counts Morrissey (admirable both for his music career and his media trolling) as an advocate, but it also spawned Vegan Smythe. 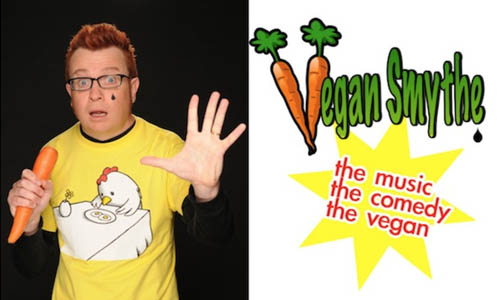 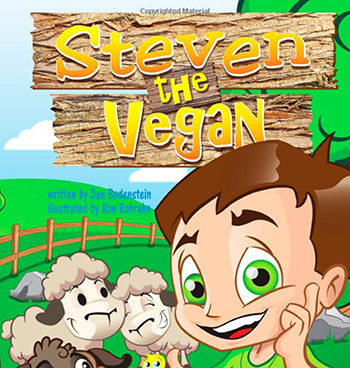 The vegan industry isn't all dipshits and lollipops, though. "Steven The Vegan" is a book designed to teach children that animals are not food. It includes bizarre distortions of grammar and also science, such as when the author explains that unfertilized chicken eggs would develop into baby chicks if only kids wouldn't eat them. Lying to children to convince them that your pet ideology is correct is the same as telling them they'll go to hell for jacking off. Well, except for the fact that bible-thumper kids are still allowed to eat a nutritionally appropriate diet. 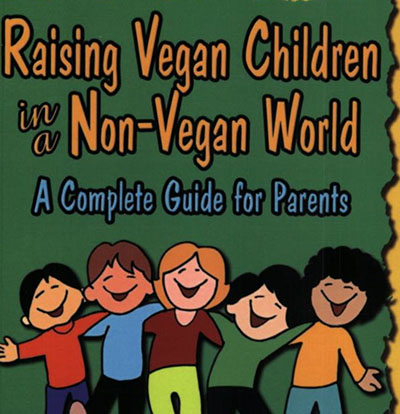 This brings me to my next point, which is that a purely vegan diet is not nutritionally adequate for a child. I won't argue with you if you don't want to eat eggs as an adult, but if you refuse to give your child any food derived from animal products, you are almost certainly going to hinder their mental and physical development. "Raising Vegan Children In A Non-Vegan World" is a book that proposes you do this very thing, suggesting that you should give them 11 servings of bread every day in place of what they would normally eat. It also helpfully offers a chapter called "What's the deal with vaccines?" The deal, apparently, is that vaccines might involve "monkey kidney tissue" and "embryonic guinea pig cells" in their production, so they're a no-go for true vegans. "My chronically malnourished child will be FINE when exposed to measles and whooping cough. She's had her eleven breads every day for years!" 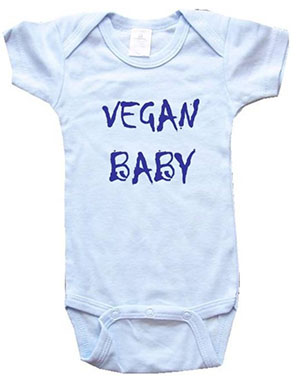 Vegans don't settle for indoctrinating school-age children, though. Just like the Tea Party, they use their babies to puppet their beliefs! This onesie is a great way to announce "I'm going to have a fucked-up kid in a few years!", unless Grandma is slipping Vegan Baby some protein and fatty acids on the sly.

Several news stories have come out in the past few years concerning first-world infants who died of malnutrition because their parents fed them an exclusively vegan diet. It's heartbreaking to hear of children dying, and even moreso that the idea of vegan purity is so important to some parents that it comes before their own childrens' health. But we still haven't reached the bottom. 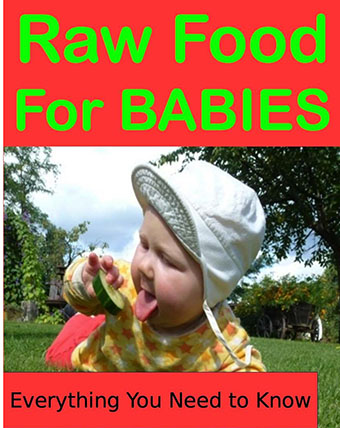 There's an extreme form of veganism called Raw Foodism, which is the idea that eating uncooked foods is better for your health than eating cooked foods. Actually, cooking increases the bioavailability of macronutrients (meaning that you can obtain more nutrition, roundly speaking, from the same amount of food.) One of the leading theories of evolution even holds that homo sapiens evolved as a direct result of the discovery of fire. Nonetheless, these insane Raw Food parents want to force their eating disorder on infants.

"Raw Food For Babies" is a primer for dramatically reducing your child's caloric intake, preventing her from getting adequate nutrition from milk or other calorie-dense foods. It claims that the nutritional benefits of eating raw foods first surfaced in 1930s Germany, which is the perfect way to wrap up this disgusting load of nutritional yeast and uncooked pasta: If you push your vegan bullshit on a child, you are a National Socialist Of Food. You are a food dictator committing genocide on your own bloodline.