BIBLE WITH A SECRET ASS LIGHTER IN IT!!

Holla At: 9 Pickles @ D Block on 2
Askin: Carry shit for a nigga, some paper or somethin GET WORD
Niggas word: IS BOND (22 in last 3 months)

Yo yall not gon believe what my nigga landline put up in this fucking bible. Check this shit out. I talked to landline and he say if you take a bible and you getcha sharp dime you use that edge and you cut into the bible and you make a little square out there. Shit take forever, but when you done you just put some spit up on the sides and get them pages to glue together real good and you go a secret compartment. 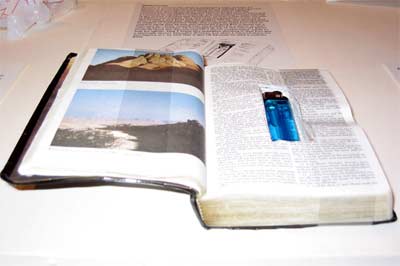 You could do this shit yourself H.P. Shivcraft and Moneymaker Don Johnson got theyself a whole secret ass library of shit. They took them thick ass books off the cart nobody never read like them battlefield earth books and they made theyself all kind of compartments. They smuggle shit on the cart with that shit nigga.

That fool T-Bone in H-Block got all the parts for some clavo ass shit like an orrery Short Eye Ted made him out of spoons. Put that shit together and is all requestin admiralty charts from a nigga for some reason now. If yall in D-Block holla at Spooky Detroit, Rat Shaman, or Dan Hitler and they move that shit where you need it to go on they book cart.

But why you bother with makin this shit? I hook you up straight nigga. You sail straight through any heat wave nigga. True.