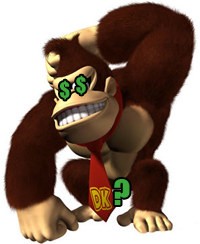 All of your wildest dreams JUST CAME TRUEWith the value of the dollar dropping like a rock, it won't be long until Americans are wiping themselves with one-dollar bills instead of the standard novelty Osama Bin Laden toilet paper. Many are looking forward to this; after all, who wouldn't want fine pressed linen rubbing up against their tender parts?

On the practical side of things, when all of your money is worthless, you will be, too. My solution: drop all of your funds into an unchanging commodity, Wii Points. Do you know how many Wii Points Donkey Kong cost in 2006? 500. Do you know how many Wii Points this same game costs today? 500. You'll find that payment via Virtual Console games, while much more complicated than your standard cash or credit card transactions, is the only real way to keep your savings intact.

Let's say you want to get some McDonald's; all you have to do is exchange your friend code with that of the friendly clerk, then promise to send them a Virtual Console game of equivalent value to the disgusting food you're about to eat. Once the paperwork is signed, consider yourself the mayor of McDonaldland!

Note: the complete, nationwide lack of electricity might be a problem. 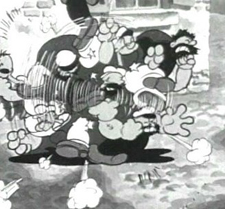 Warning: vagrants have been known to hide in dust clouds in order to stage their secret, underground fighting tournaments.A common problem that plagued the Great Depression were the frequent dust clouds caused by dirt and grime being lifted off of poor people and carried into fierce trade winds. These amorphous blobs of filth would travel across the nation, interrupting American citizens as they went on with their busy lives of despair and being hungry. It wasn't until one of these dust clouds enveloped a very important Presidential picnic in a nightmare of shade that Herbert Hoover decided something had to be done. The picnic was quickly moved to a different hill, and Mrs. Hoover's famous deviled eggs went untouched by the plight of our nation's poor.

Don't expect the same kind of executive action from the Obama/McCain/Palin administration; when complete darkness intermittently blocks out the sun for the rest of eternity, no amount of bumper stickers or "I Voted Today" pins is going to get any of the candidates to send FEMA down to help you--mainly because the funding for FEMA will soon be funneled into the new Congressional Fantasy Football League.

Why not get ahead of the curve and gouge your eyes out right now? Not only will you be able to adapt yourself to a world of blindness; you'll also feel a wave of superiority wash over you as panicked neighbors scream, "What's happening!? I can't see!" To this you will reply, "Advantage: me." Ignore the tears sputtering from your empty sockets like hose water from a broken lawn sprinkler.

Lower Your Standards for Entertainment 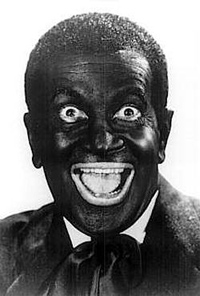 "I'll see you in your nightmares!" - Al JolsonIf there's one thing a Great Depression is good for, it's making the most insulting entertainment a worthwhile escape from the desolate ruin that is your life. This explains director Howard Hawks' blockbuster hits, 1932's Man Punches a Horse, as well as 1933's Man Punches a Horse 2: Also Cows.

This was a time period when people would regularly pay to watch Al Jolson smear his face with shoe polish to imitate a black man on the silver screen - and it would have been somewhat of a novelty if racism wasn't mandatory, or if blackface wasn't once an accepted way to break the ice at high-society dinner parties and lighthearted lynchings.

So if you don't like Ben Stiller now, you'd best start; his comical misadventures with women and novelty pets will be pure euphoria to anyone who subsists purely on a broth made from boiled shoes and scented laundry detergent (AKA laundry water).

As far as I'm concerned, a world of post-economic rape will only serve to make me much, much funnier in the terms of relativity, and frankly, I see no problem with the changes necessary to make this happen. Get ready to laugh again, America! 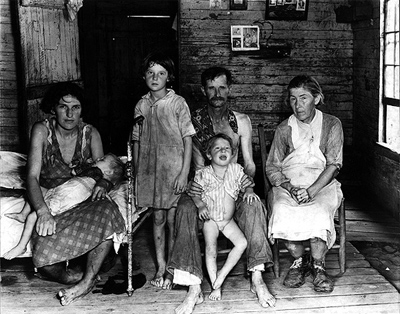