Everything I know about history was learned by playing this game.

History is a subject that teaches us about the past in ways that math and gym can only dream of. Being a writer, I've always been fascinated by the events that shaped our world and the stories behind them. Well, except the renaissance. With 2004 drawing nearer, I thought it would be a great idea to highlight what unfolded on some of the most notable New Year's Eves of years past. Then again, I also thought it would be a great idea to mix the suspense of a police drama with the glamour of a musical to show the world just how much cops can rock. But that's a whole other update. Let's begin our exciting journey through time with:

10,000 B.C.
Cavemen have no grasp of months or years, yet something awakens within them on this first recorded New Year's Eve. Our slackjawed ancestors celebrate the occasion by hooting wildly, bashing rocks against one another, and dying before they reach the age of twenty.

29 A.D.
Living up to his reputation as a mean drunk, Jesus turns six of his wise men into loaves of bread and punches out a sheep. While throwing the uppercut which he would later regret, the savior is heard shrieking, "The meek shall inherit my fist!"

1531 A.D.
Excusing himself from a gala, Nostradamus rushes home to pen a prediction:

In the West, a masterpiece will be made
featuring the man and woman whom all adore
Gigli will be surpassed only by the tale of the Bio-Dome

1620 A.D.
The first New Year in America is bleak for the pilgrims, with little food and even less protection from the elements. There are no celebrations this year, only death and despair. Historical Note: Dick Clark was born at the stroke of midnight this New Year's Eve, the offspring of settler Asshole Clark and an enchanting mermaid who called the Fountain of Youth her home. 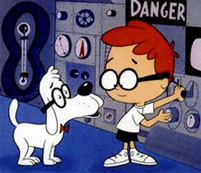 Everything else I know about history was learned by watching this cartoon.

1621 A.D.
The second New Year for the pilgrims rocks, thanks in large part to their contact with the native indians. Settlers are able to convert the hides of indians into clothing, crude shelters, and even gigantic nets to capture small game and indian children. It has been a bountiful year, with an entire continent of skin waiting to be seperated from the uncultured indian tribes who are selfishly hoarding it to protect their muscles and internal organs. Full of hope and joy, the pilgrims bring in the New Year by lighting buffalo on fire. This begins an American tradition which will last well into the 1800's, when the buffalo inexplicably begin to dwindle in numbers.

1663 A.D.
Taking a nap under a tree before the evening's festivities, Sir Isaac Newton is rudely awakened when an apple falls on his head. This seemingly mundane event leads to Newton's greatest discovery: Apples! Yum!

1787 A.D.
While the rest of the nation's founders are gathered in the town hall, Andrew Jackson sneaks into Benjamin Franklin's office and locates the Constitution. Under the cover of night and with the sounds of his drunken compatriates wafting across town into the office window, Jackson modifies the document to contain one article the others had foolishly voted against: "No fat chicks."

1800 A.D.
Two British teenagers claim their love for one another by carving "Joshua + Katie For Ever" into a boulder. They are proven to be fools though, when they die in a flood sixty years later. That's not even close to For Ever.

1864 A.D.
Abraham Lincoln goes to bed early as usual, and awakens at the stroke of midnight after a vivid dream in which he learns the secret to ending the Civil War. Half-asleep, he clumsily scrawls this valuable secret down on a nearby notepad and goes back to sleep with a proud smile. Upon waking up, he reaches for the notepad and grimaces as a horrible feeling washes over him that most writers are all-too familiar with. There on the paper is the phrase, "a dog that sweats... A LOT."

1920 A.D.
George Washington Carver has invented 325 peanut-related products over the course of his life, and decides to work while friends celebrate New Year's Eve. Due in part to poor ventilation in his lab, Carver finally goes too far and invents the peanut-flavored peanut.

2003 A.D.
A clearly embarassed Bigfoot is spotted at a Wyoming grocery store while buying tampons for his girlfriend. The creature is captured on the store's security camera, but many experts dismiss the figure on the tape, claiming it's "just the Loch Ness monster wearing a fur suit."

So there you have it! I hope you have a great New Year, but I hope even more that you managed to learn something from all this. After all, those who don't learn from the past are condemned to buy MMORPGs the day they're released.