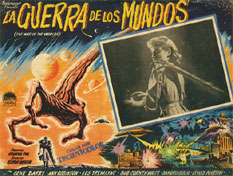 Many scientists believe that a Martian invasion will consist of a giant Martian arm reaching from Mars to crush individual people.The people of Mars have once again proven their technological superiority over the pitiful meat sacks of earth by destroying yet another probe bound for the surface of Mars. The UK’s Beagle 2 probe, which was intended to deploy to the surface on Christmas day, instead stopped talking to various satellites, space ships, and moon colonies that it was supposed to be communicating with. While scientists continue to bang the pot on their heads with a wooden spoon and pretend that the chances of intelligent life on mars is a million to one, those of us with a little common sense can see the truth for what it is. That truth is that an alien invasion from Mars is imminent, and we can’t sit around just waiting to be crushed beneath the alien foot of a tripod walker or disintegrated by a heat ray, we’ve got to welcome our new masters!

Beagle 2's latest failure to make contact capped a dismal Christmas Day for the mission's British scientists, trying to answer a question which has fascinated mankind for years -- "Is there life on Mars?"

“They can pry this planet from my cold dead hands,” you’re saying to yourself.

Well, they will if you insist, so for those of us who would like to continue to draw breath in the post-invader future please allow me to allay your fears about the sort of world you’ll have to come home to after a few decades a slave mining on Mercury.

The our Martian overlords already have the technology to cure almost every disease imaginable. Once they have a few of us skinned and technostapled to an immunolathe for detailed vivisection I have absolute confidence that the Grrognal Ministry of Flesh Preservation will quickly fill the gaps in their pharmacy. After all, we may be little better than screaming food, but we can be valued contributors to their society. If there’s one thing the Martians hate more than the stink of our rotten green world, it’s wasting resources. 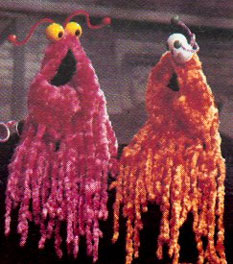 Every person will be an equal in the society of the Martians. It will be sort of like communism only much more efficient and with gulags replaced with pain chambers and collars that liquefy our brains if we step outside of permitted areas. Each person will have a somewhat comfortable sleep chamber with a 6x6 inch viewing window and almost two square feet of wall area that we can plaster with pictures of our favorite Martian leaders. I like Xenulak the Marrow Drinker!

Say goodbye to the annoyance of phone solicitation thanks to the wonders of Martian obedience slugs. Inserted through the sinuses, these helpful parasites will take up residence in your speech center and prevent you from saying anything other than “yes, sir”, “no, sir”, and the Martian National Anthem, which doesn’t actually contain any words. As an added bonus the obedience slugs will help keep you trim as they multiply in your skull and leech fattening calories from your blood.

How can you fight with nail-hobbled feet and a slug that secretes agonizing acid into your spinal column whenever you even think about striking back at your Martian masters? You can’t! This plus the complete ban on anything more dangerous than a piece of paper will ensure that humanity has a nice quiet future ahead of it.

The Martians don’t care about celebrities or TV, and NBC’s studios will be just one of many locations consumed in a massive plasma explosion that celebrates the arrival of the Martian invasion fleet. While Jennifer Aniston will be outside the blast radius at the time, hideous tissue scars will put a kibosh on any future plans of stardom.

The Martians already have detailed plans for reprocessing plant, animal, and mineral matter into a viscous fluid that tastes like delicious sulfur and will be available in large and renewable quantities. This diet will be supplemented by the two greatest snacks imaginable; prayer to eldritch alien gods and backbreaking physical labor!

Scenic work on location in the Scald Mines of Venus or the breathtaking vistas of the endless hurricanes of Saturn can be yours thanks to Martian technology. Why worry about setting your TiVo to record “Monster Garage” when repeatedly exceeding your harvest quotas of carnivorous plants will earn you a full ten minute stay in the tentacle brothels of Exodus V?! You’ll forget about your troubles as the numbing stinging cells in the tips of the tentacles massage away your stress.

Having just endured a Christmas with the family you probably realize just how wonderful a world without family holidays could be. Well, wonder no more, because the impending Martian invasion promises to bring with it Flesh Herders who will separate your generation and earmark it for labor, while sending your parents and children to tissue vats for reprocessing as delicious food and comfortable couches.

Aren’t you sick of arguing politics with the people around you? Don’t you hate turning on the TV and seeing a politician that you want to gut from stem to sternum and empty out into a storm sewer?! I know I do! That’s why I am so excited about the destruction of all of earth’s political systems to be replaced with the Martian State and its glorious leader Mekulnul XIII. His no-nonsense demeanor and handsomely fascist black space ponchos fill my heart with love for our tender Martian masters.

Martian film critic Devulon the Acid Tongued has sworn a liver oath to record new commentary tracks for special Ultra Criterion releases of every movie currently available on DVD. Look forward to such insightful comments as:

“The cattle, they do love to dance.”

“American Pie 2 is more effluvium from the endless flesh sump of the human imagination.”

“This was filmed on location in Philadelphia, which I watched burn from the crystal occulon of my ion cruiser.”

“Schindler’s List is more proof of the inability of humans to follow through on the simplest of plans.”

“I was also rendered Fast and Furious by this film in which the flesh sacks once again propel themselves needlessly through explosions inside their primitive iron conveyances. Were the cast not already dead I would crack their bones into powder.”

“I enjoy the way that the Lion King features no photographic reproductions of humans.”

I don’t know about you, but I can’t wait for the boxed sets this guy is going to put his golden stamp on!

Knowing the Martians and their vast intellect, they are probably reading this with some sort of futuristic crystal telepathy device. Martian masters, please deliver our world from the senselessness of billions of lives without the purpose that you can give us! All hail Mekulnul XIII!

I Taped Over Your Childbirth

Hello, this is Livestock. I'm talking to you from inside the computer. The very first Post-Christmas edition of Photoshop Phriday is now up, and it's everything you would expect it to be if you expected it to be a collection of fake VHS tapes. The SA Forum Goons are cleaning out their old tape collections to make room for DVDs, so everything must go. Including quality titles such as this: Stop on by and stock up on fine titles no longer available in stores.