When I get a link to an especially badly designed site, the kind that looks like it hasn't been edited since people used Yahoo!, I wonder if the person who owns the site just keeps paying that hosting bill without even noticing. In the case of Lemmy's Land, my best guess is that this was a project some 12-year-old kid got really excited about, and in an effort to connect more closely with their progeny, his parents agreed to buy him a domain name and shell out some money for hosting. Eventually, the kid forgot about the site, went to college, and got really into some sort of bizarre pornography, but the bills kept coming. By that point, though, it had just become a part of the parents' monthly routine, fitting in just fine amongst the electric bill and the mortgage. One day, when the parents switch to social security, they'll reassess their bills, and they'll find this page, and lemmykoopa.com will become vacant once again, possibly forever. Unless Nintendo starts getting really desperate. 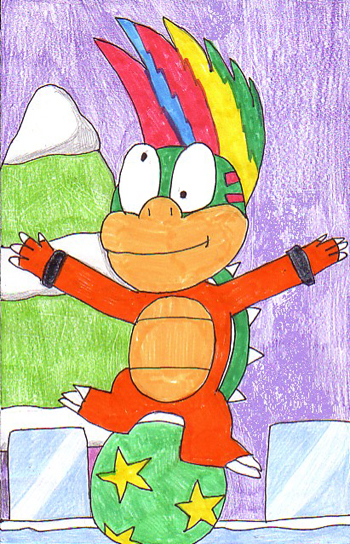 Who is Lemmy Koopa? Well, in the context of the Super Mario Bros. games, he's one of Bowser's kids. In the context of the Internet, Lemmy's Land is what every Web site devoted to a minor video-game character is - an obsessively detailed, poorly designed, borderline creepy fantasyland of pseudo-imagination. Here's all you need to know about Lemmy's Land: It houses only things you will never, in any sort of context, need to know. If you think it's worthwhile to read page after page of shit about where in the Mario timeline a game falls, or to browse elaborate manuals for imaginary Mario sequels, you're certainly welcome to do that, but you should immediately go fuck yourself afterward.

Anyway, there are apparently 43 fucking "fun-filled" sections on this site, which was last updated on January 8, though without a year I hope that means like 2007 or something. There's no mention of "Super Mario Galaxy" on here, either, so I am starting to really, really hope that means no one has touched this site in quite a while. But now, you can! Get together with 42 of your closest friends, with each one of you manning a section, and read it intently, discuss its true meaning, whatever. Also, don't forget to mute, because every single fucking page has music on it.