MERRY CHRISTMAS FROM THE KING OF KASH

Okay I just read through the update I had written for today and it was absolutely terrible. It wasn't amusing and each sentence seemed utterly forced and cliched in just about every possible way. This update was so bad that I was forced by God Himself to delete the whole thing and apologize for its extreme lack of quality despite the fact that nobody will be ever able to read it thanks to the miraculous delete key. My excuse for this disaster is that my father gave me some Venusian death illness a couple days ago and this resulting lack of functional white blood cells are apparently to blame for my blistering deficit of creativity and humor this Christmas holiday. If you're curious as to what horrible subject I was trying in vain to write about, allow me a moment to summarize my recent exercise in failure.

I was recently awarded a fresh new copy of the Greater Kansas City Southwestern Bell Yellow Pages a few weeks ago, an early Christmas present thrown onto my front porch by a surly cursing drunken man peeling through the neighborhood at 100 miles an hour. I used my limitless powers of laziness to ignore this phone book for a good two weeks or so, but my girlfriend eventually picked it up and brought it inside one day. "No! What are you doing?" I shrieked in my famous high pitched voice that has made me so popular with the kids these days. "That phone book is for exterior decoration only and demonstrates my unflinching dedication to the telecommunications industry!" Either she didn't understand what I was babbling about or simply didn't care, as the phone book remained inside and I was powerless against its home invasion because I was conserving my energy to clean up another steaming mass of greasy dog turds which had found their way out of my dogs' anuses and onto my carpet in some magical digestive joyride.

This phone book proceeded to take up valuable space on my bar for the next week or so thanks to my aforementioned tireless efforts to effortlessly tire myself. You see, I have this mental deficiency which causes me to not see certain items no matter what they are and where they are located. I had a woman's shirt sitting in my closet next to my hamper for the first six months I lived in this house despite the fact that the shirt hadn't been worn in nearly two years and I don't even communicate with the woman who owned it. Yet there it was, sitting there next to the hamper after being inexplicably packed with my other belongings and moved to my new house. I not only bothered to pack and transport this utterly worthless item, but I also unpacked it into the closet, placed it next to the hamper, and refused to move it for half a year where it sat and somehow remained invisible to my eyes. I argued that it was some type of futuristic "stealth shirt" but my girlfriend didn't believe me, probably because I was lying.

Anyway, I was about to stack this phone book on the existing Pyramid of Information, a special tower of phone books that I am collecting in the corner of my kitchen because I once heard on CNN that information is going to be very valuable in the near future, when suddenly I spied the following wonderful image splashed across the cover: 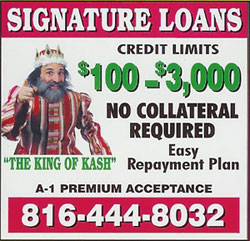 Yes, this was an ad that Signature Loans actually paid to place on the front cover of the Greater Kansas City Southwestern Bell Yellow Pages. This advertisement gained the approval of various chairmen and financial executives who are paid actual, real, non-Monopoly money to make complicated business decisions which won't directly lead to their bankruptcy. Somebody in a powerful position actually issued the okay on this lovely ad and handed over an exorbitant amount of money to let it grace the cover of a phone book with a major circulation. I can just imagine the meeting which resulted in such a creative gem.

BUSINESS CEO: "Alright folks, I'm paying hundreds of thousands of dollars to have premium placement on this year's SBC Yellow Pages for the Greater Kansas City area. We need a real genius marketing campaign, something that will put Signature Loans on the map and into the minds of millions of Missourians. We need something catchy and we need it now!"
ADVERTISING GUY #1: "Oooh, how about some bearded asshole wearing a crown? People love bearded assholes in crowns!"
BUSINESS CEO: "Yes! That is a great idea!"
ADVERTISING GUY #2: "Perhaps he could be pointing at the readers as if to say, 'hey! I'm a bearded asshole wearing a crown and I'm pointing at you!' People love to be pointed at!"
BUSINESS CEO: "This is all so great! Is somebody writing this down?"
ADVERTISING GUY #1: "He could be a member of royalty, like a king! We could call him 'King Cash' to make him sound fancy! People go apeshit over that queen broad in England or Ireland or wherever, so this would be a big hit!"
BUSINESS CEO: "Well I don't like the name 'King Cash.' It just doesn't lend a serious, credible edge to our company and I'm afraid that people wouldn't perceive us to be a major financial lending institution if we were to adopt such a title."
ADVERTISING GUY #2: "What about 'King Kash' with a 'K'?"
BUSINESS CEO: "Here is a wooden barrel full of hundred dollar bills. I want you to make this happen!"

So my update today was originally all about King Kash and his exciting Christmas adventures. As you can probably surmise from my previous allusions, it was utterly terrible and failed on just about every conceivable level possible. I tried to write it as King Kash himself, bragging about his expansive and powerful kingdom, but there wasn't really much room to move there creatively and every turn I made ended up in banal, poorly written crap. I still stand by the claim that "THE KING OF KASH" is inherently humorous and deserves plenty of attention, but now I realize that he lacks the potential for an independent character update. Instead of subjecting you to the horribly embarrassing update I had written about King Kash, I will instead subject you to the horribly embarrassing update I have written about the horribly embarrassing King Kash update.

Ugh, fuck it. Merry Christmas from myself, the staff of SA, and King Kash. 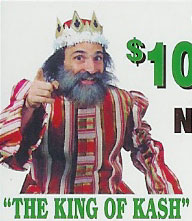 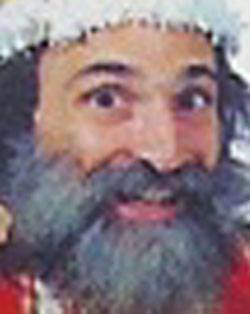 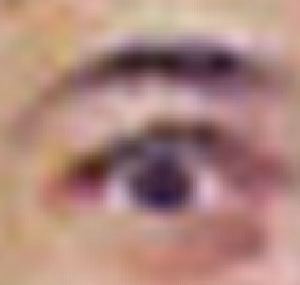