I'm Mad As Cattle and I'm Not Gonna Take It 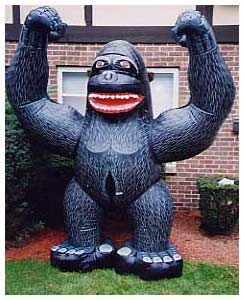 BRING FOURTH YOUR HIGH PRICES AND I SHALL MAKE MEAGER WORK OF THEM!I believe it was me who once wrote, "We live in a tree of danger that branches out to grant countless perils." At the time of my writing that, which was in the very last sentence, I wasn't completely sure what I meant. But now, at the dawn of my very next sentence, I believe I truly understand. Pandemonium, you see, has gripped America like an inflatable gorilla might grip the concept of high prices, crushing it into overpriced dust in a dramatic showing of economic might and the rule of the inflatable gorilla. The largest natural habitat of inflatable price-fighting gorillas, America, is now home to an outbreak of mad cow disease, which has already claimed the life of one precarious bovine. That's right, just beyond the pristine reach of the inflatable gorilla's savings-stained hands rests trouble in the nation that most closely resembles paradise. This humble Internet writer has no difficulty visualizing a giant inflatable gorilla shedding a tear for this poor cow in a touching display of compassion above all else. Mad cow disease is here, and while it might not be here in large consumer quantities, it is here enough to raise alarm in a manner similar to how a giant inflatable gorilla would raise the roof using a special jack supported by tremendous values. I apologize, this article was originally going to be about giant inflatable gorillas, but was rewritten at the last minute to be topical and poignant.

Mad cow disease might sound like some kind of euphemism for injecting raw beef into your veins in an effort to achieve some incredible beefy high, but it's not. This is the taste bud terror of the new millennium, the roaming scourge that turns our meaty and milky champions into crazed killers. An uncontained outbreak of mad cow disease would have dire effects on our economy, our diets, and probably the lives of the thousands of cattle who would be murdered in one giant hecatomb held in honor of the god of food safety. More startling, this could easily make the movie "Maximum Overdrive" a reality, only with cows instead of technology trying to kill us. In fact, it could make any movie involving conflict a reality, so long as that conflict can be modified to accommodate mad cows. I could discuss the dangerous possibilities of infected cow life imitating art for hours on end, but that would only seek to evade the pressing matters in this high stakes game of mental dodge ball. 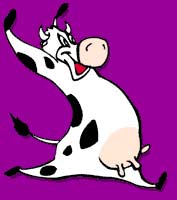 Damn cow, you is maaaaaadddd!!Now before you zap an e-mail off to me with some weird comment about the irony of my "Livestock" alias, take a minute to know the facts. My hip Internet handle is by no means an indication that I'm some kind of cow sympathizer, because I eat cows for breakfast sometimes. Truthfully, those times are rare, but not as rare as the rare done beef I often eat for lunch and dinner. I think beef tends to taste pretty good, which is why I have no qualms seeing cattle slaughtered to appease my voracious appetite. If astronauts tasted good and were kosher, I'd probably eat them too. I just picked the name because some jerk had already claimed the nickname "Lowtax," leading me to vow that I would infiltrate his life and destroy his career in some form or another. But that's something else altogether.

Bovine spongiform encephalopathy, the fancy name for mad cow disease given by the United Kingdom's Ministry of Obfuscation, is known to rot holes in the brains of infected cattle. Mad cow disease works in much the same way as the website Fark.com and the comedy of Louis Anderson: it systematically removes the parts of your brain that work to prevent you from being a drooling, raving lunatic with lazy eyes and a tendency to resort to unprovoked attacks. The unfortunate result of this situation is that as of right now, every cow related product is a landmine not unlike the one that tragically took the life of Princess Dianna. Short of resorting to ridiculous scenarios like becoming vegetarians or simply not eating beef, all we can do is accept the government's claims that we're safe and continue to gleefully gorge on handfuls of dead cow. I, however, am not ignorant enough to believe that in a world where a deer running through a subway station with impunity garners major headlines, meat is 100% free of a deadly disease. This is an animal world, and we can't trust them anymore than we can trust the word of a professional liar with several trophies unfairly won at a professional lying contest. 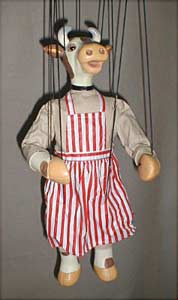 Maybe this is why mad cow disease exists. It certainly makes me mad.Cows have long enjoyed a wonderful place in life. The cattle in our country live the kind of lives starving third world children only dare to dream of when they aren't being whipped or forced to make retarded looking shoes that allow athletes to soar like slam-dunking flying saucers. They receive good food, land, opportunity, and plenty of time to enjoy life before they are sent to heaven, or what we call the local grocery store. This might be an isolated incident like that time a girl talked to me, but I can't help but think this is the first stone hurled in a coming war that will likely leave millions of people hungry for a hamburger or hot dog that will never come. The buns of our nation will remain unoccupied, like a maternity ward in a sterile world. No one will ever hear the whimpers of the hot dog bun crying out for purpose, not when our ears are deaf to the frequencies they use. And even if we could hear the sounds made by bread, their wheaty banter would be squelched under the roars of Michael Moore's stomach as he searches for something meaty to put in his mouth.

The government may say that the meat is safe, but what do they know? This is the same government that told us we could survive a biological attack by building forts out of old cardboard refrigerator packaging and duct tape. Oh, I built a fort, and while I did not die from any biological attacks, the entire back wall of my fortress was compromised when a dog peed on it and made it smell bad. Had there been a real attack, the urine-weakened cardboard would surely have given way to a deluge of invisible anthrax spores sneezed out of Allah's terror-filled sinuses. It was all a fantasy designed to convince dumb people that tragedy can be averted with well-placed tape that just happens to be manufactured by companies with friends in high places. As tender and reassuring as the adhesive embrace of duct tape might be, it will do little to hold your life together against the absoluteness of DEATH.

In short, we have a single incident of mad cow being reported. Maybe this will be the only one and a simple quarantine will solve things, but then maybe not. I half expect the government to have already transported this infected cow to Camp X-Ray where it is undergoing extensive interrogations. The real truth could be far more sinister than anything we imagine – too sinister, in fact. To protect us from the truth we can't handle, they could just be telling us it's all okay. We won't know until we're either dead or not dead, and there is no telling how long that might take to pan out. Leaving it in the hands of the government is one solution, but a more viable one is to panic like crazed nutjobs. This might not sound rational, but we're dealing with an invisible threat that may well be hiding in any bite of meat. You or one of your prized loved ones just might win the bizarro-lottery and swallow a mouthful of brain rot. Should that day come, I pray there is an inflatable gorilla standing by to carry you up to Valhalla in arms strong and firm from waging war against tyrannical prices. Change is in the wind, and upon that wind rides a sailboat full of deranged cattle screaming towards skullduggery.

Polish Gaming at its Finest

Hey there folks, it's your old pal Taylor "Psychosis" Bell here with a cheerful holiday message for you - Mario & Luigi: Superstar Saga is an excellent game, possibly the best GBA game to date, and I recommend it even to people like me who usually hate RPGs. Okay, now that the good stuff is out of the way, I've got a brand new waste of hard drive sectors for you, and it's either called "Codename Nina: Global Terrorism Strike Force" or "Nina Agent Chronicles", I'm not sure which. 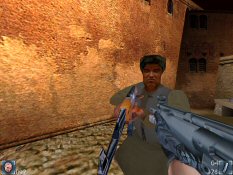