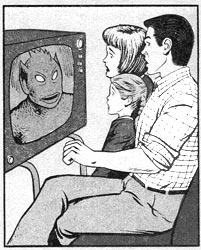 Picture this: What if a huge muscular woman busts out of the bathroom and chases you out of a gathering? You both are screaming and running out to the road. Sounds pretty bad until you look at it from the other side and see that the gathering is actually prison, the muscle-lady is your friend, and you’re not even a prisoner you’re just a prison guard, but you don’t want to be at work anyway because everyone keeps repeating that same joke, “Man, working here is just like prison,” so you run home anyway.

Or, you’re having a birthday party on your front lawn for yourself, and you look outside to see that the bounce house has deflated, most of the petting zoo animals (mostly goats) are slowly dying, and there’s an angry neighbor doing doughnuts on your grass. This is bad, right? Guess again, this party has been going on for over three months and this is pretty much exactly what you and all the neighbors expected.

Maybe you’re at a fancy company dinner with all the head honcho guys and nobody is really talking about anything interesting so you make a pretty detailed pyramid out of a meatball and some rib bones, and the grizzled CEO says “Kid, that better be work related or you’re fired and this dinner’s finished!” and you’re just kind of speechless, but then the head engineer guy says “Wait a minute, look at that! There, on his plate! He’s a dumb guy!” and everyone else at the table says “Yeah! A dumb guy! Let’s get him!” and none of that really happened but it helps you pass the time to imagine better dialog at stupid business dinners. That, and building stuff out of food parts.

Or, how about when you’re at the Grand Canyon and you keep making the same really good joke, saying to the others and their mules, “Hey, anyone seen our waitress?” and everyone else gets so mad that you end up not having to pay somehow? I’m still working on this one.

Nearly any situation has a good point of view if you look for it. Except for ones where you sort of doze off during business meetings and wake up and everyone else has Motorcycle Fever but they won’t admit it (the biggest symptom, second biggest being drowsiness).

There’s also no good point of view when it comes time to make up nicknames for everyone in the office, and you keep calling your boss “T-BOSS” (T-Boz) even though the agreed-upon nickname by everyone else was “Playboy” and the original “Playboy” was demoted to “Playkid” which has a different meaning entirely, but whatever, I guess I'm the only one in this office who cares about the memory of Lisa "Left Eye" Lopes, even in an indirect way.

You know what? Just do yourself a favor and don't even try. I'm out of here as soon as I can find my motorcycle.