You're the Man for the Job 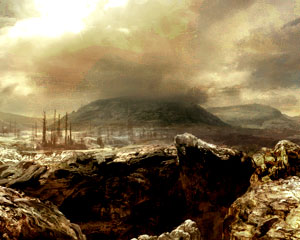 Welcome to my office, son. Ol' Jeb said you popped out of one of them old-timey stasis pods that emerged from the burning scrap heap. Said he nearly died rescuing you from those bandits out there. You're lucky to be alive, that's for damn sure.

You're probably confused as all get out, not knowing a darn thing about what the world has turned into, seeing as how you likely entered that stasis pod when things were very different. I doubt, for example, that your stasis pod was sitting in a burning scrap heap when you entered it, else you probably would have had reservations about climbing in. Also, I can't help but speculate that there were no bandits dancing and screaming around you when you hopped inside. Those came later, when things went to hell.

You're probably wondering who I am and why I have this strange hat with tiny little gizmos attached to it. Those are fair questions, mister. But right now we have more important matters: Bandits. They mostly just stick to themselves and only attack people dumb enough to enter the burning scrap heap-- folk like Ol' Jeb, who just can't help himself on account of his autism. That and people who don't know any damn better, like you. Boy you must be mighty confused by all this.

I bet people back in your time didn't have robot legs. I have two. It's a great story how I got them, and let me tell you: Bandits were involved.

So let's talk some more about bandits, why don't we? How about I give you this gun and send you out to kill every last one of them? You might be wondering why I don't send somebody more familiar with the terrain or the methods these bandits routinely employ-- their various clever traps that you'll have no idea how to protect yourself from, for instance. Well, that's another astute question.

I could ask somebody else, like that gruff bounty hunter who hangs around the saloon asking people for jobs. He's got loads of experience and I bet there's an amazing story of survival that goes along with each of those scars on his face. You can almost bet he lost that eye to bandits, mutants, or, God forbid, the high-tech armies of the Crimson Administration. But, for some reason, I don't trust the man. Something about the way he looks at me.

You on the other hand, I do trust. I don't know why. We only just met a minute ago, when I was informed of your existence by Ol' Jeb. I can't imagine knowing anybody less than I know you. You are literally the most unknown person in all of the world right now, which is why I'm going to tell you this: There's a weakness in the town's defenses. Quite frankly, it's a big damn hole in the wall that bandits could come pouring through at any minute. I want you to look at that hole, then come back and tell me that it's not the most glaring oversight you've ever seen.

You're back? I knew you could do it. Let me give you some money for your troubles. It's not much, just something the townsfolk scraped together while you were out looking at the hole. We eke out a hard livin' so folks here can't spare much, but they all wanted to show their appreciation.

Now that we agree that hole is a bad situation, why don't you go kill those bandits so they don't come running through tonight while everyone gathers in the opposite side of town to watch two old men try to wrestle an oiled-up mutant? That's just good fun, and it's what these people need to unwind after a hard day of pacing around our makeshift wasteland community, commenting on the dangerous nature of bandits and remarking how miraculous it was Ol' Jeb happened to find you when you popped out of that high-tech coffin in the middle of a bandit barbecue.

Why don't we just patch up the hole with all the debris and scrap metal next to the hole? Look, you're new to this era, and I know it's gotta be shocking to take in. Where you come from they probably didn't have mutants, let alone oiled-up ones for old men to wrestle. We do things different out here, and we get by OK so long as newcomers do their part and pitch in. That hole will be fixed in due time, but right now we need you to go and take care of those bandits.

Why don't we just leave the bandits alone if they stick to themselves? Son, you ask an awful lot of questions. Heck, I respect a man who wants to get to the bottom of things. You Oldworlders always did have a knack for learnin'. Maybe it's cause of them Old World doctors blasting a heap of nanoids up your butt, or maybe it's that glowing computer glove you're wearing. You're plenty smart, and that's for sure.

But you gotta get it through your head that we have a way of surviving, and it might not seem logical to a man who spent the last hundred years in a metal burrito. Sooner or later those bandits are going to need fresh scrap to burn, and our town is made entirely out of scrap. Sure it's all metal and metal doesn't burn, but do you think a bandit is going to make that distinction?

You'll find their hideout near the burning scrap heap. Watch out for traps, every last one of them is more fatal than the last. And a word of advice: If those bandits offer to take you in and provide you shelter, don't believe 'em. That's just a common ruse they use to trick outsiders. That, and free barbecue.

Can't help but notice you aren't marching out of my office with a sense of purpose. Heck, I can tell by the way you're eyeballin' that gun I handed you that you figured out it's not really a gun. It's an Old World cup-and-ball game, and it's a lot of fun once you get the hang of it. No I ain't playin' a dirty trick by giving it to you. In the right hands anything can be a weapon, including fun games.

To tell you the truth, we can't really spare the guns, pardner. To do so would leave this town completely undefended and at the mercy of bandits. But don't worry: Once you send those bandits to hell in one first-class pain safari, we'll be free to live in peace and not worry about getting gutted by bloodthirsty outlaws when we sleep and watch our elders grapple with oily mutants.

Listen, we're practically old friends now, so I'll level with you: We don't have any guns. We gave them all to the last guy who popped out of one of those stasis pods, and he went and gave them all to the bandits. We had quite an arsenal, let me tell you. That dirty scoundrel had the audacity to tell us we were too dumb to use 'em. He even had the nerve to bring up the fact I accidentally shot both of my legs off while trying to kill bandits.

I can see you've got the hang of that cup-and-ball now. Using it to kill a heavily armed bandit is probably a lot easier than catching that ornery ball in that tiny cup. Anyway, put that down for a spell and hear me out.

So here's your plan: You're going to take that cup-and-ball, march to the bandit encampment, kill every last one of them and bring our guns back. Then, I'll explain to you in a matter-of-fact way why you need to infiltrate the Crimson Administration's high-tech bunker, fight an 80-foot-tall robot, board a rocket to their orbital space station, and blow it up... killing yourself in the process.

I'll assume that you walking towards the door means you're on board. Mister, this town owes you its gratitude. Good luck, we're all countin' on you.