Forget Everything You Thought You Knew

It may not look like much but it looks way cooler when the logo is an animated hologram hovering in the night sky.I was born on August 9th, 2078. Bet you didn't know that about me. In 2099 I joined the Temporal Exploration Society. It's a lot like what you folk in your simpler times call the Society for Creative Anachronisms, only instead of making suits of chain mail and hitting each other with cardboard swords we build time machines and travel into the past. A time machine isn't much different from a trampoline. It just has some wires and stuff hooked up to it and it makes a really loud "whomp" sound when you bounce and then when you land you're in a different year. You can check out a diagram of how it works. The real secret behind time machines is that they use nanotechnology and that's all I can really say without ruining your timeline. Nanotechnology is awesome, it solves pretty much every problem you guys have right now, but it won't really come into use until like 2069 so you guys are mostly out of luck.

There are a lot of really cool things about visiting the past and finding out just how real history can be. I would love to tell you about all of these things but, again, it might cause problems in your timeline and I also just don't have enough time to tell you about all of it. You might think "hey, you should have all the time you want!" but the truth is if I traveled back in time to June 19, 2005 and handed myself a pre-written article just getting that close to myself would make the old me turn into this pile of gray goop that is called Timeoplasm. I also can't email it for reasons too complicated to go into here.

Now, before I lay all this truth gleaned from time traveling on you I want you to close your eyes (after you finish reading this sentence) and take a few seconds to forget everything you know. Most of it is rubbish and the parts that aren't rubbish can probably be learned again pretty quickly.

Okay, ready? Let me start by laying some facts in your face about the Temporal Exploration Society. All too often some kids from the TES get a hold of a time machine and when no one is looking they'll go back in time and mess stuff up. The rest of the TES usually tries to fix it but sometimes we just can't, so here is what is real in your timeline because we messed things up and could not fix them: 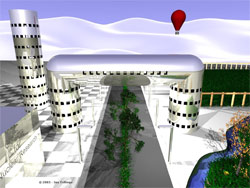 I can't really show you what the future looks like, but this 3D render is pretty accurate.

World War II. The entire war was instigated by the TES to kill one guy: Ted Dooley. It worked.

One of the Beatles was a time traveler and it wasn't John Lennon. It was Ephraim Salinger, the one who could levitate. Beatlemania was a real disease only it was spread by Salinger through bad pork instead of by the Beatles and their music.

Only through the constant efforts of the TES have we been able to prevent the release of Duke Nukem Forever. If it were to ever be published it would paralyze society as untold millions lose all thought of the real world in favor of the intense virtual realm of Duke Nukem.

People used to ride dinosaurs all the time, but we moved their skeletons far away from each other just so those damned creationists don't have any valid arguments.

People also used to have sex with dinosaurs all the time but we had to move those skeletons even farther away from each other than the dinosaur riders because man, yuck.

In about five years a senator is going to turn into blue light and then float through the ceiling in the middle of a press conference. Don't freak out. In fact, just pretend nothing happened.

If you own any all-white cats with blue eyes I would highly recommend killing them before 2015. Sorry about that one. 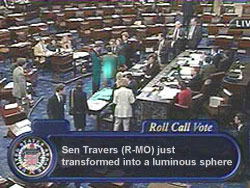 I probably shouldn't be showing you this one.There are a few other things I could tell you about without ruining your timeline or turning you all into Timeoplasm but I would probably get in trouble with the local Time Commander. You know that one asshole RA you had at college? The Time Commander here is like him only he will send you back to 1200 BC with a pair of underpants and a matchbook if you get caught with a bong.

While I can't tell you about any other TES alterations to your timeline I can tell you about plenty of observations I have made that can clear up history for you. While the history books are nice they inevitably change a lot over time. Being there and seeing the history makes our history books in 2078 much closer to the objective truth. Now, I have to warn you, I told you earlier to forget everything you think you know, but this time I really mean it. This stuff is going to blow your simple mind like 400 pounds of Truth-N-T.

The fourth plane on September 11th of 2001 was shot down by the Canadians.

Bill Clinton actually did not have sexual relations with Monica Lewinsky. During his tenure as president he frequently switched places with his twin brother Jessup Clinton and it was Jessup who engaged in untoward acts with the young intern. This will be revealed to an extent in 2011 when Bill Clinton runs for president again under the logic that Jessup was actually the sworn-in president during Clinton's first term.

Woodward and Bernstein's "Deep Throat" contact was not Mark Felt. It was the world's tiniest New Guinean tribesman who was later defeated in hand-to-hand combat by Felt. After slaying the tribesman, Felt ate the man's remains to gain his knowledge.

The Civil War was just an excuse created by the South to explain why they didn't recover as quickly as the North from a huge meteor impact.

The Mel Gibson movie "The Patriot" is way more accurate than the British would have you believe. Never trust the British.

Benjamin Franklin signed the Declaration of Independence with semen. Someone else's semen.

Christopher Columbus did not kill any natives. By the time the boats landed (there were seven of them) he was so fat that he could not even get out of bed. Some guy named Jake did all the raping, enslaving, and murdering.

The War of the Roses happened pretty much as history records, just replace the word "Roses" with "Lasers."

Genghis Khan was a strategic genius, but that's pretty easy when you're a heuristic strategic AI programmed by a hyper-intelligent yak herder from the silicon steppes.

The Crusades were less about knights and big battles and more about a feel-good tour of the Middle East complete with high-kicking showgirls and the world's first all nude revue.

The Merovingians were pretty much exactly like that dude in the Matrix.

The Byzantine Empire really wasn't all that complicated. There was this Emperor and then a couple bodyguards and he got pulled in a sled everywhere because he was lazy or something. Whatever the reason he was a total asshole and really "Byzantine" should mean "giant asshole."

Jesus Christ was a pretty cool guy and all but man, the crap he did got blown way out of proportion. Seriously, he could lay a loaf in his pants and there would be an entire book in the Bible about him making fire-winged angels appear on top of a solid gold boat full of locusts or something. He was so mellow and laid back and he would totally freak out to see all these uptight people talking about him.

Zeus was real and most of the other Greek gods were real. Zeus wasn't magical or anything, but he was like a hundred feet tall which might explain how he gave birth from his forehead.

That covers most of the interesting parts of human history that aren't already covered by conspiracy theories. We've also done a lot of exploring throughout ancient and pre-human history. This is a lot less fun than you might think. Without a record to go by we just sort of guess and usually end up watching a frog take a dump or seeing some giant bugs or something. In 50,000 TES bounces we have only recovered a few interesting facts about pre-human history.

Humans didn't actually evolve from primates directly. The missing link is unicorns. I can't tell you where to find them, but…oh, hell, it'll be hilarious. Check under Mount Saint Helens.

Have you ever had a lump of Play-Doh that you rolled into an elongated worm shape with your palm? That was pretty much the exact same thing as the Big Bang.

If you knew what the Grand Canyon really was you wouldn't have turned it into a tourist attraction. Hell, you probably wouldn't be able to go near it without vomiting.

Look, I would like to be able to tell you what happened to JFK and all kinds of little details like that, but I'm out of time here. My bounce-back countdown is about to hit zero and I'm going to be back in 2078. Whatever you do, just don't forget: never trust the British.