The Mad Max Game Is Nothing Like The Movie Babe: Pig In The City

Buyer beware! If you're thinking about picking up the new Mad Max game to relive the experience of the motion picture Babe: Pig In The City, think twice. I was flabbergasted to discover that the video game and movie have practically nothing in common. 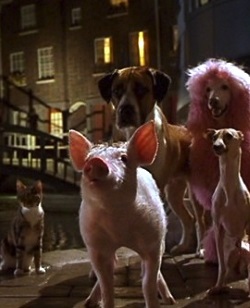 Max is beset on all sides by complete assholes. Spiky cars full of screaming warriors randomly swerve into him. Sometimes he even runs into convoys, roaming dust clouds full of hostile cars protecting a large truck.

These guys are all jerks. They jump onto Max's roof. They ram him from behind. They get in front of him and accidentally drop cascading sheets of fire in his path. Wait, what if that wasn't an accident...?

Thankfully, Max has a lot of ways to fight back. You can use slow-mo to shotgun a dude on your car, or target parts of enemy vehicles such as red barrels. There are a lot of people driving around with exposed red barrels. You can shoot a harpoon through a windshield and pull a guy out of his own car, or use that harpoon to pull off armor, tires, or doors. You can use a nitro boost to ram a guy off the road or blow him up. You can use the "thunderpoon", which is a word I did not make up, to blast guys with electricity. If you play your cards right, you can even jump out of your car, pick up a gas can, light it, then throw it at someone as they try to run you over.

Babe doesn't have car combat. I'm pretty sure there's a chase scene involving chimps and an angry chef, though.

The wasteland is large and sandy, as you'd expect. But it's also surprisingly detailed. There's a lot of great environmental art. There are also a ton of enemy camps and scavenging locations. Sure, fatigue will set in after the hundredth time seeing the same yellow ladder, rusted sheet of metal, haphazardly placed gas can, and hollowed out bus, but the route you take to the same pile of collectible scrap will always be different.

Babe's city is not a wasteland. It has no yellow ladders or hollowed out buses. It does, however, contain a pig. (Babe)

Mad Max
There's a lot to enjoy here, but ultimately this is a professional video game with jump mapped to the L1 button. 7/10

Until Dawn
So that's what a Quantic Dream game would be like if David Cage was a halfway decent writer. 8/10

Madden NFL 16
Be sure to enjoy the new feature "man catches ball" and oh god have I become the dismissive idiot with nothing to say about sports games or have I always been like this? 6/10

Forza Motorsport 6
Be sure to enjoy the new feature "cars on a road". 7/10