The Presidential Primaries are rapidly approaching. Or at least they are approaching. They are in the future and time usually moves forward, we can definitely say for certain.

We at SomethingAwful.com (the website) have always prided ourselves on our up-to-date, informative, and even-handed political content. We also pride ourselves on employing both the fattest (Johnny "DocEvil" Titanium) and scrawniest (Chris "Petey" Peterson) writers in internet comedy. In any case, we are proud to present a complete voting guide for anyone clueless on how they want to use their valuable percentage of a percentage in the American decision-making process.

This week, we will cover the Democrats. 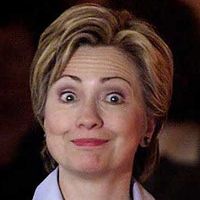 The Iraq War: "George W Bush may have ordered this war, but it's the troops who are actually there shooting people. I think we can all agree that we should blame the troops."

Immigration: "It's important to remember that we were all immigrants to this country at some point. Of course, we were all babies at one point too. What are you gonna do? Have a bunch of babies run this country? No, you'd allow babies to work as manual laborers in limited numbers and then kick the babies out again. Come back when you've grown up you stupid babies! I'm sorry, what was that question again?"

Speaking of babies: "I like the idea of giving every baby born in America a $5,000 account that will grow over time. This one I really did say: check out this news link of me saying this crazy shit. By the way, there's about four million kids born in America every year. Vote me."

Pro: Would be first woman president, able to use her feminine wiles to influence foreign leaders, could maybe see if Osama would lay off on America in exchange for railing her.

Con: She has some bad memories involving the Oval Office, it might make her tense during important meetings. 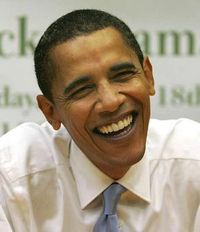 Turn-ons: Someone who's good with kids and has a great sense of humor

Turn-offs: Selfishness, possessiveness, any sort of birth defect if it looks gross.

Terrorists: "As reported by leading media outlets, including Fox News and KeepingAmericaWhite.com, my middle name is Hussein so I'm basically best friends with all those guys. I'll just pop on over with a few beers and ask 'Sama to chill out a little. ALLAH HU AK…haha just kidding, I'm a harmless Christian. Gotcha."

On the internet revolution: "I've been told that blogs are the path to presidency, so I'm making it my goal to have more blogs then any other candidate. Please come to my website and give me more precious blogs. I require more, my minions! Yes…all is according to plan…"

Pro: Putting him in office would be a major first for the American presidency: the first time we had a president with the initials "B.O." Does something smell funny about this presidency? Why don't you tell us, President B.O?? Hahahahaha goddamn that'd be a proud moment for this nation.

Con: You sure you want to put your life in the hands of BIraq Hussein Osama? This message brought to you by the Council of Third Graders Making Fun of Everyone's Name. They also came up with Hillary FART-ton and John BONERwards. Keep up the good work, guys.