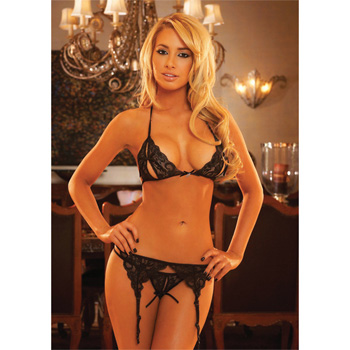 You can be forgiven for thinking of Joseph Stalin as a lonely man. Stalin liked to take the airbrush to photographs of his former comrades, spraying them aside, painting them out, one by one, until he was alone in every photograph. Sears practices a different sort of revisionism. They will sell you a bra and panties for your wife with holes cut out for all the exciting bits, but they can't show those bits in their catalog. They'll brush their poor lingerie model into a perfectly Stalinist Barbie doll. I assure you, the bits are still there in real life, such as you would call it. When I last saw Fritzy Lemon, wearing a bra and panty set from Hustler by way of Sears, she was standing beside the bed with the lamp on behind her. It silhouetted her mons Venus into the perfect shape of a W, which I have illustrated below.

She ejected me from her bedroom for trespassing with the force of her words. She used the most unkind and accurate insults related to my heritage,correctly identifying my father as a South German barrel of rancid pickles from which was plucked an unlucky green midget with the shape of a turd, which was then thrust into a stocking full of mashed potato. What came out, said Fritzy Lemon, was more like a catfish than a man. Doubly hurtful because Fritzy Lemon never had a nice thing to say about catfish either.