I don't have the best reputation, being a bad apple responsible for the extremely subtle artificial apple flavoring in Apple Jacks cereal and all, but damn it if I'm not sick and tired of all these comparisons people keep making between me and those wife-beating pigs. Not to unfairly compare them to my good friend, Bad Pig. Sorry about that.
Look, I'm a racist, I admit. I absolutely have it out for the Rastafarian cinnamon stick known only as Cinna-Mon. And yes, I do try to sabotage him at every turn with wacky hijinks on our daily sprint to the cereal bowl. Because I hate his race. The cinnamon race. But I am NOT so racist that I try to systematically murder his people, incarcerate cinnamons disproportionately, and beat cinnamons every chance I get to make my apple-balls feel big. Because I'm better than that. Because I'm not a fucking cop. 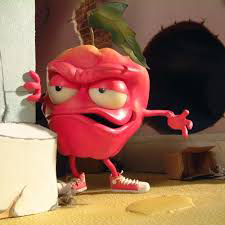 Do I resort to violence sometimes? Absolutely. I've had my fair share of throwing holes on the floor for Cinna-mon to fall into, uprooting the sidewalk and comically flopping it like a rug to trip up Cinna-mon's sprint, and running after him with grabby hands. But have I ever fired tear gas at Cinna-mon as he peacefully sat on the ground? Have I ever shot him point-blank in the face with rubber bullets, or real bullets for that matter? Absolutely not! It would take a real fascist petty bastard to commit crimes like that, so I'd appreciate it if you folks would stop drawing parallels between us.
Moreover, I actually pay for the consequences of my actions. Anytime Cinna-mon out-maneuvers me, I splat against the window, flattening my face and sliding down slowly, murmuring "But they're called APPLE Jacks" to myself. That is my punishment for my vanity and over-eagerness to jump in the big bowl of cereal before a giant child takes their first bite. That, my friends, is called justice. What sort of justice do all these bullies in blue see when they repeatedly harass, beat, murder, and incarcerate unar 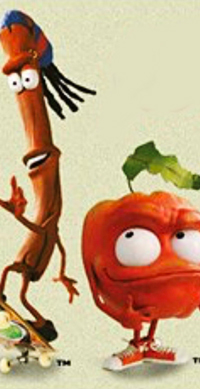 med black folk? You don't need to hold a nationwide protest to see me pay my dues, because again, I'm not the god damn fuzz.
And NEVER, in my whole tasty nutritious part of a complete breakfast life, have I ever stood idly by while a fellow apple shoved a cane-wielding senior citizen onto hard cement, or murder a literal child. I may be a bad apple, but ya gotta draw the line somewhere! Us cereal folk keep each other in check, because the flavor balance of Apple Jacks has to be just the right amount of both cinnamon and apple, unless we're doing Cinnamon Jacks or Limited Edition Apple Jacks: Apple Clones with bonus apple puffs. The point is, we have fuckin' standards and basic oversight to prevent apples from doing whatever the fuck they want and making society their plaything. We keep each-other accountable.
So quit comparin' me to these flat foot bootlickers! As I've clearly illustrated, I ain't done nothin' to earn such a slanderous connection. Fuck the Police, and try eatin' some Apple Jacks, they ain't as bad as you remember.

Hey fellow Antifa terrorist! Help bail out some protestors if you haven't already, and keep protesting! Also you can join the Something Awful forums if you'd like I guess.