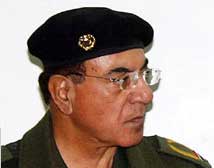 "The American infidels have been destroyed by Allah's almighty radioactive pregnant cyclops from space."

With the so-called war in Iraq consuming less time than a screening of Stephen Spielberg's"AI", the world finds itself quickly changing into what it "should" be, a place where Iraqi children are crushed by some gigantic steel US machine and converted into oil or gold or whatever the stupid filthy hippies claim in between their state college drama courses. Even as you read this, "Coalition" tanks roll through Iraq and perform whatever stuff "Coalition" tanks normally do, which I suspect revolve around making selected items explode and causing other selected items to get squashed underneath them. Since the war in Iraq did not earn the official approval of the UN, a group of various filthy countries including (but not limited to) Portugal and Arkansas, the invading American and British forces chose to name themselves the "Coalition" because the phrase "a bunch of Angry British and American Guys With Large Explosives" presents much more of a challenge to write. Oh wait, I think various other countries have sent in a token thirteen soldiers to join the Coalition. For example, Australia FedExed a few guys with hand grenades manufactured in the 1960s, but the Coalition decided against using them in combat, as the Australian soldiers immediately attempted to drunkenly beat up a palm tree once somebody opened their shipping box.

Throughout the war, which many scholars refer to as a "fake war" due to the fact that roughly 19 Coalition soldiers died (and out of that total 18 ceased to live due to malfunctioning Coalition helicopters either landing on top of them or exploding with them inside), Iraqi Information Minister Mohammed Saeed al-Sahaf entertained viewers across the globe with his comical remarks and hilarious interpretations of the conflict. Now I don't want any SA readers out there to falsely assume I'm a world-renown historian, mainly because I want everybody to assume I'm a world-renown penis-enhancement surgeon who drives Batman's car to work every day, but I know a fuckload about history and the world. For you non-linguists, the term "a fuckload" means "an assload." My extensive historical background has provided me with many facts about Iraqi Information Minister Mohammed Saeed al-Sahaf, but for some reason I will ignore them all while describing him in the following section:

NAME: Iraqi Information Minister Mohammed Saeed al-Sahaf
AGE: Old, possibly older than previously speculated. Maybe less old if you lack the skill to accurately guess the age of Iraqi men and you err conservatively.
DATE OF BIRTH: Subtract his age from the current date to figure this out. Use one of Niels Bohr's equations if it will make you feel like a smartass.
RESIDENCY: Iraqsville, Iraqiland.
CURRENT STATUS: Living, or possibly the opposite, non-living. It all depends on if he ended up shot or exploded after a skirmish with Coalition forces and the two guys holding wooden axes shipped in from Spain.
HISTORY: His parents engaged in some sexual activity in one point in time, thereby transforming him into a zygote inside his mother's stomach. After a few months of gesticulation, he transformed and matured thanks to the larvae stage of development, and eventually grew into an embryo. Then he turned into a baby and somehow fell out of an unusually large hole in his mother, a bug which has been officially recognized by Microsoft. Look for a critical update patch soon. Sometime between then and now he became the Iraqi Information Minister. I would assume this could be credited to taking a few of those GED classes over the Internet where you can specialize in exciting and useful occupations such as "blacksmithing" and "observatory maintenance."
FAMOUS QUOTE: "I am Iraqi Information Minister Mohammed Saeed al-Sahaf." 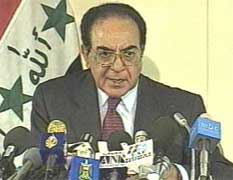 "Greetings, members of the press. Today I rode a dolphin to school and ate pie and ice cream all day."

With his background out of the way, it becomes easier to understand the complex enigma of Iraqi Information Minister Mohammed Saeed al-Sahaf. Throughout the war, Iraqi Information Minister Mohammed Saeed al-Sahaf's job revolved around putting a creative spin on the events occurring in his wonderful wasteland home of Iraq. Somebody handed him a piece of paper which read "SAY OPPOSITE OF WHATEVER AMERICANS CLAIM," and he followed those instructions by the book (Sylvia Browne's "Sylvia Browne's Book of Angels"). Each and every time any Coalition forces made a remark about Iraq, Iraqi Information Minister Mohammed Saeed al-Sahaf would jump out of his chair and refute the claim. If he wasn't previously sitting in a chair when the Coalition made the assertation, he would commandeer a chair, sit down in it, and immediately jump out while shrieking like a stray cat being fed into an ATM slot. These outlandish claims soon grew famous throughout the world, just like the movie "Outland" which revolved around Sean Connery living on the moon and shooting people in the gall bladder with a shotgun. His tall tales and laughable news reports lacked the journalistic integrity of such reputable sources as The National Enquirer and Billy Fergeson's 4th grade report about dinosaurs who travel through time searching for pirate treasure. I have compiled a list of the more notable Iraqi Information Minister Mohammed Saeed al-Sahaf quotes in response to Coalition claims to prove my point, although I really don't recall offhand exactly what this point revolved around.

COALITION QUOTE: "Our forces are moving through southern Iraq."
IRAQI INFORMATION MINISTER MOHAMMED SAEED AL-SAHAF RESPONSE: "The American forces were all destroyed in the Gulf of Mexico by the hand of Allah."

COALITION QUOTE: "We are engaging Iraqi hostiles with armored divisions and air support."
IRAQI INFORMATION MINISTER MOHAMMED SAEED AL-SAHAF RESPONSE: "Our mighty army has crushed the Americans, who are now committing suicide by voluntarily choking to death on either others' semen."

"One time I was abducted by aliens who resembled Frank Sinatra in just about every way."

COALITION QUOTE: "After sustaining a direct hit from a rocket-propelled grenade, we returned fire and destroyed an Iraqi barracks."
IRAQI INFORMATION MINISTER MOHAMMED SAEED AL-SAHAF RESPONSE: "The Americans decided to blow up a hospital full of innocent children who were waiting for heart transplants and UN-approved eyeball replacements."

COALITION QUOTE: "We have recently captured and secured the Baghdad airport."
IRAQI INFORMATION MINISTER MOHAMMED SAEED AL-SAHAF RESPONSE: "Every single American in the world was recently smitten when Allah blew a fireball out of his hands and caused all the infidels to combust. Then Allah climbed into his candy-powered jet plane and flew to Pluto, a planet which may or may not exist according to my religion."

COALITION QUOTE: "Our forces are now able to move freely throughout Baghdad at will."
IRAQI INFORMATION MINISTER MOHAMMED SAEED AL-SAHAF RESPONSE: "American forces have invaded the wrong Iraq. I mean, I'm like sitting here in Iraq and everybody's happy and staring at dirt or whatever they normally do all day here, and I don't see shit. I don't know what Iraq they claimed to have invaded, but it's clearly the wrong Iraq. I'm drinking gin and lemonade here in my lawn chair, listening to some crazy music featuring a guy who screams a lot, and there's not a single American anywhere, and I even looked behind that phone booth across the street."

"Hello black fellow, today I was shot with a 100 mm mortar and Allah allowed me to survive by eating it whole."

These wonky quotes by an even wonkier man provide proof that, even when staring in the face of irrefutable facts, human beings possess the potential to generate the goofiest and most unbelievable set of lies possible. Many scientists refer to this phenomenon as "pulling a Mohammed," unless of course the scientist in question has the name of "Mohammed," in which case they call it "racist." Despite the label placed on it, pulling a Mohammed can be one of the most fulfilling and beneficial conversational tactics since the award winning "your mother" retort, which has been officially recognized in 38 states as being the second-place Trump Card of all replies, narrowly edged out only by screaming "fuck yoooouuuuuuu!" Allow me to provide some examples of pulling a Mohammed in quasi-realistic scenarios simulated by our pretend actors which have been fictionalized in an attempt to retain as much realism as possible.

EXAMPLE #1: The common observation. Many people do not take the opportunity to change common observations into hostile replies by simply pulling a Mohammed. This is because they are stupid. You can change your life and outlook on the world by pulling Mohammeds in everyday conversations, ranging from highly scientific calculations to even the most mundane observations. This tactic presents a minimal challenge to the user while simultaneously "showing up" the other person and making them look like a real horse's ass. 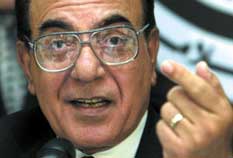 "Every American has just turned into chlorine thanks to our Allah Defense System. Take my word for it. Really. You'll turn into chlorine too if you don't believe me."

EXAMPLE #2: The argument. Many topics in the world inspire heated debates between people, whether they concern racism, poverty, politics, or if playing the Nintendo Gamecube turns you into a fag. Some of the more naive citizens choose to back up their arguments with facts or personal experiences, unaware that pulling a Mohammed can have the same outcome with less than 90% of the effort. If you pull a Mohammed and the person you're debating with makes some flippant and hate-filled reply such as "that doesn't make any sense" or "what?", then you should realize you're winning the argument and they're simply resorting to "straw man tactics." I don't know what "straw man tactics" consist of, but I heard the term on CNBC and I think that if I use it then I can trick people into thinking I'm intelligent. Oh, and handsome too. And well hung.

PERSON: "It is my opinion that NAFTA is helping revitalize Mexico and Mexico City, and has no negative aspects."
CORRECT RESPONSE: "You are a Mexican puppet, dancing under command from the Mexican government, in a disco hall full of your own rancid vomit."
EVEN BETTER RESPONSE: "There is no Mexico, only Allah."

PERSON: "I think Tom Landry will help guide the Atlanta Jets to the Winston Cup this year by having them kick a three-pointer in the last quarter mile stretch."
CORRECT RESPONSE: "I'm going to kill your wife and children."
EVEN BETTER RESPONSE: (Kill wife and children)

As you can see, these examples prove beyond a shadow of a doubt that there was no possible motive or way for me to rape that woman in the back alley of Hooters on December 15th, 2002. Oh, sorry, I got my notecards mixed up there, I meant to write that pulling a Mohammed is an untapped, limitless conversational technique which will always result in an easy victory, regardless of the subject or pretense. I hope that this tactic finds its way into everyday conversation, and if it doesn't, it's obviously some trick masterminded by the American government, and you are nothing but a mindless puppet dancing for their pleasure. Ultimately I will prevail and you and all your relatives will become hairless and sterile when the hand of Allah dumps poison toads into your lying pants.

"This one is for Johnson!" Armstrong punched the driver of the car right in the jaw and knocked him out cold. Hitler raised his hands in surrender because he knew it was curtains with someone like Armstrong around.

"Sorry butthead," Armstrong said, "your chance to give up is long past, now it's time to pay the piper."