Your Terrible Neighbor’s Schedule For The Foreseeable Future

Grilling time, from sunrise to midnight. What's the occasion? Who knows. What's being grilled? Piss, apparently, with a heaping side of tear gas. The smell of grilled piss wafts directly toward your house, a rolling wall of noxious pitch-black fog. 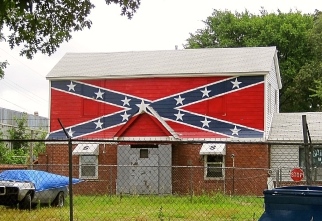 Installing the largest U.S. flag in history, a display of astounding patriotism. Over the coming years old glory will remain in the elements, proudly flapping, fading, and decaying. Meanwhile, the nearby confederate flag, Gadsden flag, and the flag of a college football team will all be handled with great care and replaced at the slightest sign of disrepair.

Remember lawnmower day? It's like that but with a chainsaw, jackhammer, and table saw. As far as you can tell, nothing is ever cut down, repaired, or produced.

Country music. Not classic country or bluegrass, but truly vile country pop, played at a volume so loud that you'd swear the neighbor is planning to walk across the state and would like to hear this garbage music emanating from his house for the duration of the journey. Every few hours the assault on your sanity is broken up by a single bass test track from 1993.

Drive the shitty car up and down the block, revving the engine, never going above three miles per hour.

Think of a holiday where someone might want to set off fireworks. On the day before and the day after this holiday, but not on the day of the holiday itself, it's time to set off an infinite amount of fireworks at 2 in the morning. They will be lit at a seemingly mechanical rate. Slowly. The gap between each firework lingering just long enough for you to hope that it's all over. Then the next firework comes.