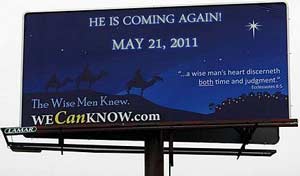 According to some billboards and a couple VERY EXCITED GENTLEMEN who like buying up billboard space, we're just a few days away from the Rapture, the big fancy factory recall of good souls. From what I've sussed out, in terms of raw importance the Rapture is like the series finale of the Super Bowl times ten. Jesus parachutes down from Heaven commando-style, then evacuates the just and righteous back to Heaven. Everyone left behind then has a few years to devour and murder each other so that God will have proven some kind of point about something or other.

Granted, everything I know about the Rapture I learned from a Kirk Cameron movie where he played a character named Buck Williams and teamed up with an airline pilot named Rayford Steele, so I'm not the biggest expert on the subject. I do know that if the Rapture goes down, then everything we know about everything changes forever.

A lot of people are quick to dismiss the billboards and the heroic billboard authors as crazy, but let's face it: Based on the unimpeachable mathematics of the Bible, this thing's a sure bet. Jesus is going to sneak down and carry out his Pinochet-style disappearing of good folks, and you'd have to be a world-class knucklehead not to have a contingency plan ready.

I intend to live May 21st like it's my last day on this Earth, even though it will probably be the first of many painful days spent avoiding cannibalistic raiders or skilled New World Order assassins, depending on which of the two beloved post-apocalyptic scenarios proves out. I know for a fact I'm not getting taken to Heaven, so it's all about living whatever time I have left to the fullest.

So, here's my plan: I'm going to eat a sandwich on the toilet. On the 20th, before the Rapture and while there is still time, I am going to Subway and getting myself a footlong turkey to have on the ready. Then, the minute I hear trumpets or see any weird activity outside or on the news, I'm taking that sandwich and sequestering myself in the bathroom until the sandwich is eaten.

Before you start to judge, know you this: I have some pretty darn good reasons.

First, eating a sandwich on the toilet is the one thing you're told never to do. From birth till death, this unforgivable crime is beaten into your psyche. It's the ultimate taboo, the ultimate forbidden fruit. The temptation has always been there in each of us, and the only thing stopping us is the knowledge that if we cross that barrier there is no going back. Well, if the world as we know it comes to an end, there's no better time to have one's sandwich on the toilet and eat it too. Please don't be mistaken: I have no intention of using the toilet while eating the sandwich, because that's just gross.

Second, it's a very achievable goal. Everyone else is going to be in a mad panic, scrambling to secure the last remaining supplies of bottled water and gasoline. There are going to be riots and murders galore out there. Meanwhile, while people are shooting each other over groceries, I'll be partaking of the divine fruit in perfect peace.

Finally, eating a sandwich on the toilet is likely to give me some greater insight into the human condition, which may put me in prime position to assume some sort of tribal chieftain role in the weird post-apocalyptic society that emerges. I can't be for certain what insights I'll gain, but I won't know until I try. I admit it's a long shot, but people may be so impressed that I went through with my plan-- not to mention had the foresight to formulate my plan in the first place-- that they see me as being wise beyond my years. After that I just need to make sure I don't get raped or eaten until such a time that the Tribulation runs its course and people get bored of acting like maniacs.

That's basically it. I'd mention stockpiling food or guns or fortifying my apartment, but honestly I can't be bothered with any of that. I'm happy to risk it all on one brilliant and delicious flash of toilet sandwich glory and accept whatever consequences follow.

To everyone out there sure to be left behind: Good luck with your own Rapture plans. I wouldn't mind looting a Best Buy or setting fire to a hospital after I finish the sandwich, if anybody wants to meet up and do some Tribulatin'.