Your Inalienable Rights, As They Pertain to Scarecrows

You have the absolute right to affix a single scarecrow to a pole of any height you desire. If the top of the pole is taller than eighteen thousand feet above sea level, a warning signal of some sort must be displayed over the scarecrow's head so as to prevent commercial airplane collisions. Examples of good warning signals: A flashing light, or a flag, or a handwritten note reading "Look Out For Scarecrow" on an index card.

Each individual in a household may own up to ten scarecrows for personal use, with up to fifty scarecrows total per home. While most scarecrow enthusiasts insist this limit is far too restrictive, it remains the law for now. 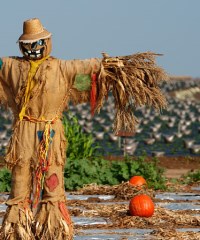 It is well within your rights to speak about your scarecrow to someone else as if the scarecrow isn't even there, even though it is sitting on the couch directly between the two of you. The situation I am describing is awkward as all get out for the scarecrow. It is not, however, a violation of any law.

If you wish to name your scarecrow Chad, you may do so. This is what it means to be free.

You can walk around in public with a scarecrow and no one can do a damn thing about it. Tuck it under your arm. Strap it to your back like Chewbacca carrying C-3PO. Whatever you want. If it makes other people uncomfortable, too bad. That's what they get for being overly sensitive. You're just an ordinary person who wants to be in control of your own fate when you go to the buffet, or to the crow store.

You have the right to prepare an elaborate meal for your scarecrow, to leave the plate of food near its resting place in your field, and to press your back against the door after you return to your house, trembling as you pray that the scarecrow will not discover the poison before the job is done.

A scarecrow can be placed on a flat surface, as if it's any other object. You can even put it on a curved surface and watch it slide off.

Congress shall make no law respecting the 3D printing of a complete skeletal system, nor shall it prohibit the amateur surgery you will conduct to implant said skeletal system into a scarecrow.

Freedom of speech extends to all interactions with scarecrows. By all means, go ahead and say or scream anything you like at a scarecrow without fear of undue retribution. Remember, though, that knowingly lying about a scarecrow to a third party opens you up to charges of slander.

Load up a two player video game. Place the second controller in front of a scarecrow. Now run up the score while your opponent on screen stands absolutely still. Keep this up for hours. Continue as the mood in the room goes from jocular to uncomfortable to something far more dark and raw than anyone could have predicted. Keep running up the score long after the room has become a senseless hell outside of time. Pretend to let up, then play with more ferocity than ever. No law enforcement agent can touch you for this.