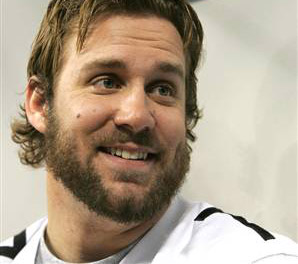 Hi there Mr. Roethlisberger, this is Kyle from public relations. I've been looking over a speech you e-mailed the entire Pittsburgh Steelers organization and the members of something called alt.binaries.larp. In particular I'm referring to the speech you would like to read at the trophy presentation if we are fortunate enough to win the Super Bowl this weekend, not the public apology you prepared in the event that you're photographed while making out with one of those animatronic fortune teller machines.

I have a few suggestions. You've written a great speech, really, but in my estimation it runs just over three hours in length - and that's not even taking into account notations like "pause for fifteen minutes of applause" or "do a little dance and mouth the words to the entirety of Kool & The Gang's 'Jungle Boogie' while the actual music is not playing".

Please don't think of the following edits as criticism, but as a way of clearing the lesser gems from a treasure chest so the crown jewels stand out as they should. Let's start with this excerpt:

"In closing, I would like to quote a great man named Bilbo Baggins: 'I regret to announce this is the end. I'm going now, I bid you all a very fond farewell.' (slip on a Super Bowl ring and become invisible, sneak into the snack stand and eat about a hundred hot dogs until I barf)"

Why is this the opening of the speech? Move it to the end.

"I don't care what you say, there's no way in hell a grizzly bear could open a padlock."

Debateable. While a padlock can withstand a direct blast from a handgun and a grizzly bear's paws are far too large to dial in a combination with any degree of precision, it is entirely possible that a grizzly bear could hold a gun to a man's head and force him to open the padlock.

"This one's for you, the fans. Now you can hold your head high, knowing that your team is the only one to have won the Super Bowl, ever! Boomshakalaka!"

I've got someone from the research department looking into this one, but I believe you're mistaken. The 49ers might have won a Super Bowl in the 70's.

"World champions, wow. I've overcome a lot to get to this point. I was born in the 1980's but I perservered, and now the 80's are pretty much over."

No corrections, I just wanted to point out how touching and inspirational this was.

"I wouldn't call myself a psychic per se, but I'm definitely a medium. It's all about being sensitive to the energies around you. We all have the gift, you just have to be open-minded enough to embrace it.

For instance, one time I picked up the phone to call a friend, and dude, you won't believe it but he was going to call me at the exact same time. We just looked at each other for a few moments with both our hands on the receiver, shaking our heads with our eyes all wide in disbelief."

There's no way people are going to believe this story. I do, I trust you fully. The average person on the street, however, won't be able to accept something this extraordinary.

Please don't do this. A jet plane taking off is around 120 decibels, so taking 1,000 dBs and amplifying them would very likely ruin the stadium's Free Crystal Glass Day promotion when everyone drops their glasses to cover their ears.

"I don't know how many people in the crowd - or heck, watching at home - know about this film because it's sort of independent and therefore ignored by the commercial Hollywood machine, but Without A Paddle 2 : Nature's Calling - the unrated version with the keg on the cover - is the best movie ever made."

Uh, have you even seen American Pie: Beta House?

"Anyone got a duckling I can borrow? I thought I had one but I guess it's still at home. No? One of those baby chickens will do too. Either/or."

If you have the foresight to write that, why don't you get organised ahead of time and ask the stadium announcer to read that as an announcement at halftime? That way you can borrow one before the game is even over, so you won't need to ask in your speech!

"Ahh, too funny. Too funny. Families are great. Families are crazy though, ya know? (pause for laughter) I had some crazy relatives. I'd be out playing, then come home and my uncle would be all (use a funny voice) 'Why were you out so late?' Ha ha! I'd be like, 'Uncle, it's only six o clock! You're crazy!' (pause for more laughter)

Not your strongest material, to be honest. I'd suggest a few more funny voices, and some really silly faces so people have a visual clue to latch onto and understand that they're hearing a punchline.

"Lots of people ask what I eat to stay in such great shape, but to be honest I don't even know. Every day or so I'll get tagged with a tranq dart and stumble around for a bit, trying to run from unseen agressors. Then I'll wake up in my car like twelve hours later and my tummy will be full.

One time I burped and it tasted like I had just licked a battery while a shrimp had babies in my mouth. Hope that helps."

We're going to have to remove this segment entirely, for no reason other than to shorten the speech. Failure to comply will result in a termination of your contract.